The examples of unconscious bias in job descriptions are rampant. I’ve included 8 of them below. The bad news: your job postings likely have some bias. The good news: it’s easy to fix.

You can eliminate unconscious bias in job descriptions manually (see tips below) or through a solution like Ongig’s Text Analyzer software.

What is unconscious bias?

An easy definition of unconscious bias is when you unintentionally exclude (and often offend) someone. Unconscious bias in job postings includes using text or media that excludes someone.

When you exclude someone you both narrow your candidate pool and damage your employer brand. If you’re in charge you might even get sued or fired.

The examples of unconscious bias in this article are focused on text in job ads. I blurred/shadowed out the.names of the employers.

Be careful with your job titles.

The employer below would be better off using Chairperson (not Chairman) in the title (assuming they want women to feel included). 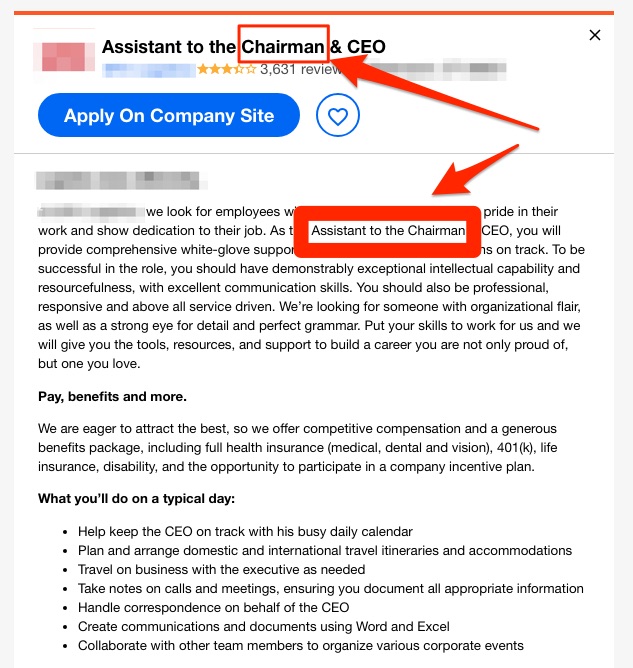 The use of “Salesman” would be another example (“Salesperson” or Sales Rep” would be better alternatives).

It’s amazing that so many masculine job titles still exist. Do you have any?

To double-check, check out Gender-Neutral Suggestions for the Top 25 Job Titles that still Use the Word “Man”.

The 2 main types of gender bias in job descriptions are:

1. Words proven to turn off some women or men

Certain words have been proven to attract or repel some male and female candidates, according to the Journal of Personality and Social Psychology’s Evidence That Gendered Wording in Job Advertisements Exists and Sustains Gender Inequality and other studies.

For example, Ongig’s Text Analyzer software (below) flags one such word “aggressively” as masculine in this job description for a made-up company called Bitcoin Inc.). In this case, some women feel the word “aggressive” is masculine and might suggest the company advertising the job has a male-oriented culture. 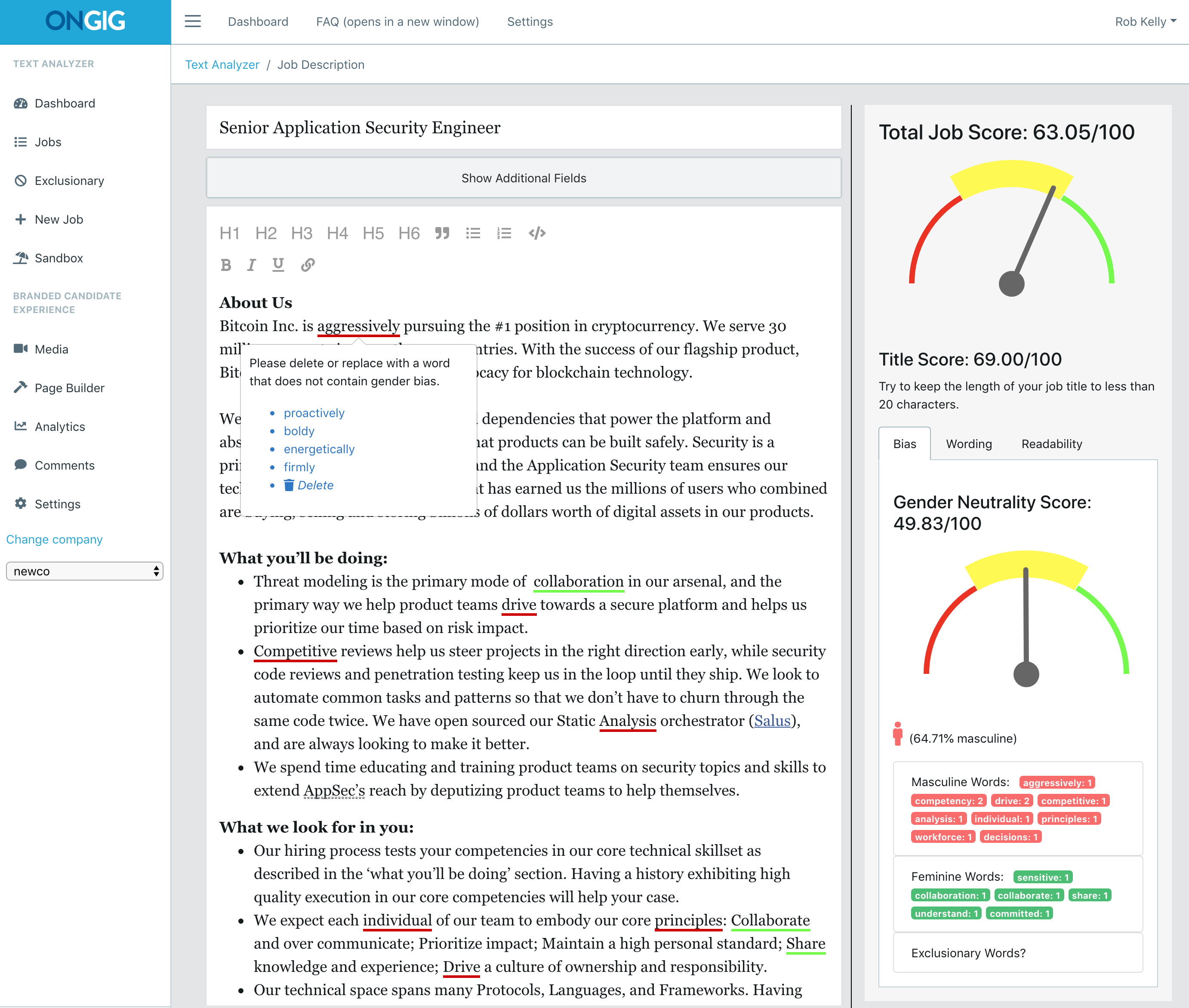 Some words are so ingrained that we hardly think about them.

Most people use the phrase “guys” in everyday conversation including in job ads (see below). Try to avoid using “guys” and instead sse “people” or “folks” or “team” or something more gender-neutral. 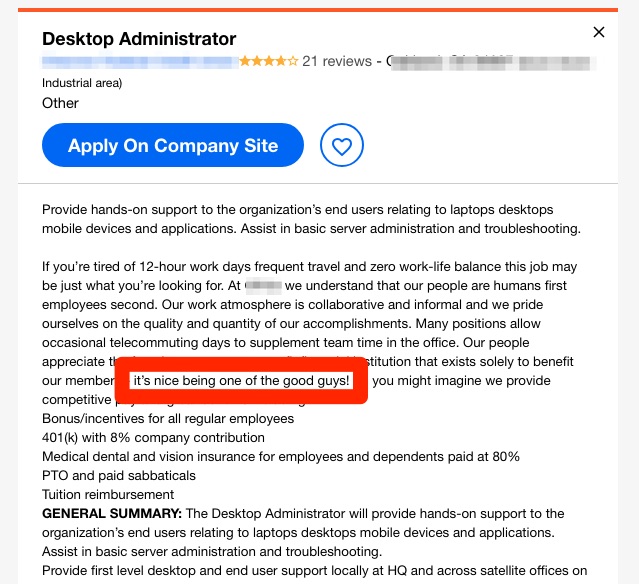 Check out the Custom Care Rep job does below. It says to some that you’re biased towards hiring men (and not women). 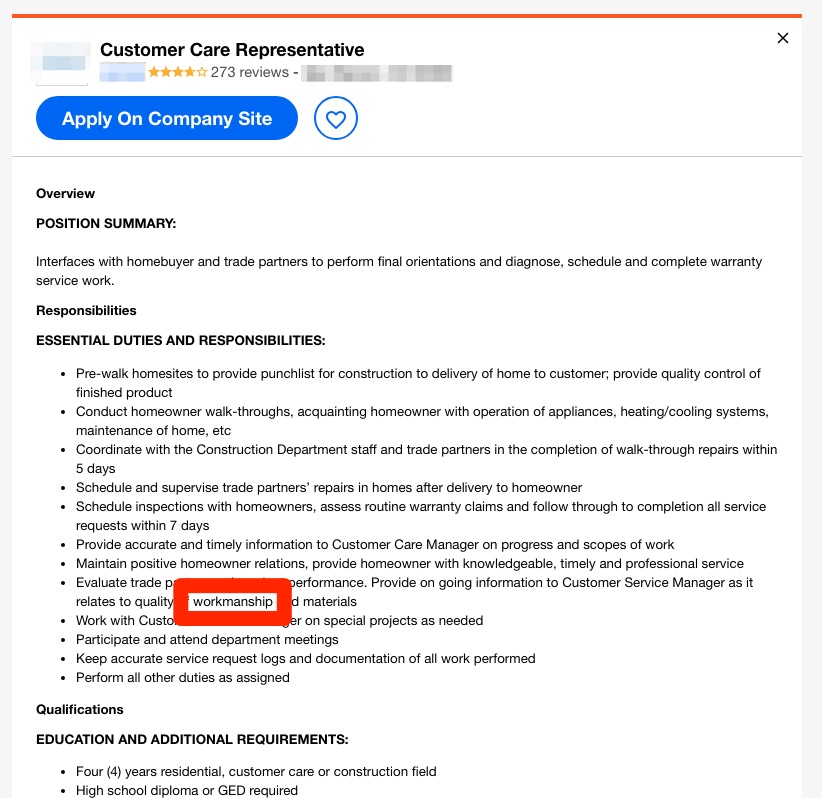 “Grandfather” — The employer below would be better off using the phrase “Legacy Clause” rather than “Grandfather Clause”. 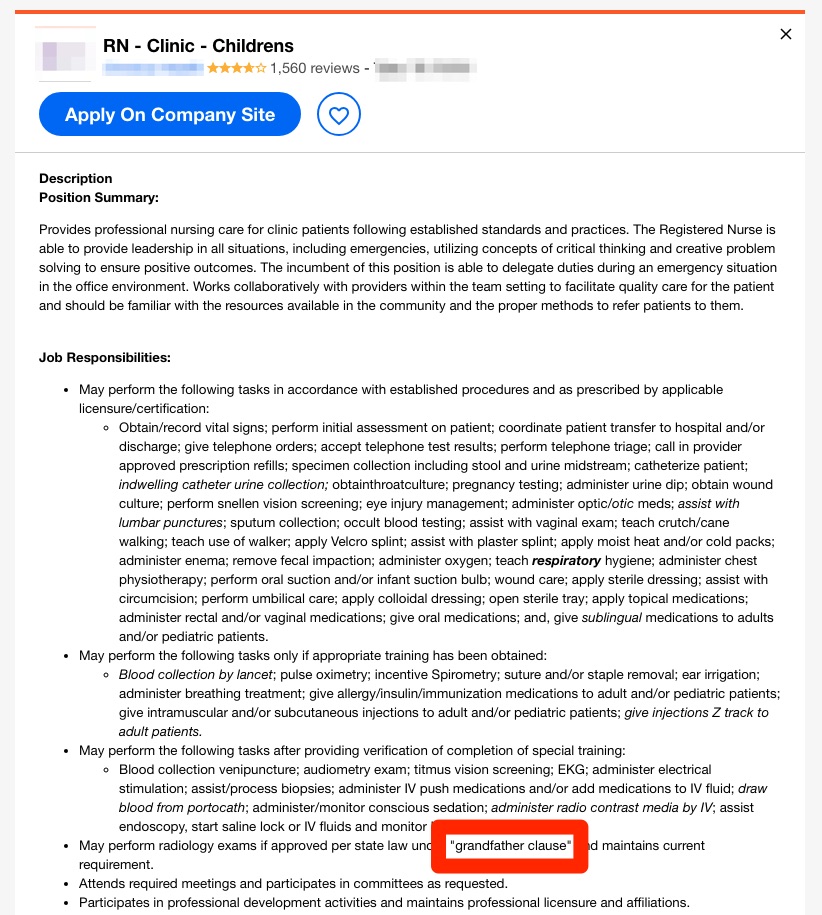 The government department below uses masculine-biased language in a job ad I’ve highlighted. They would be better of using language like: 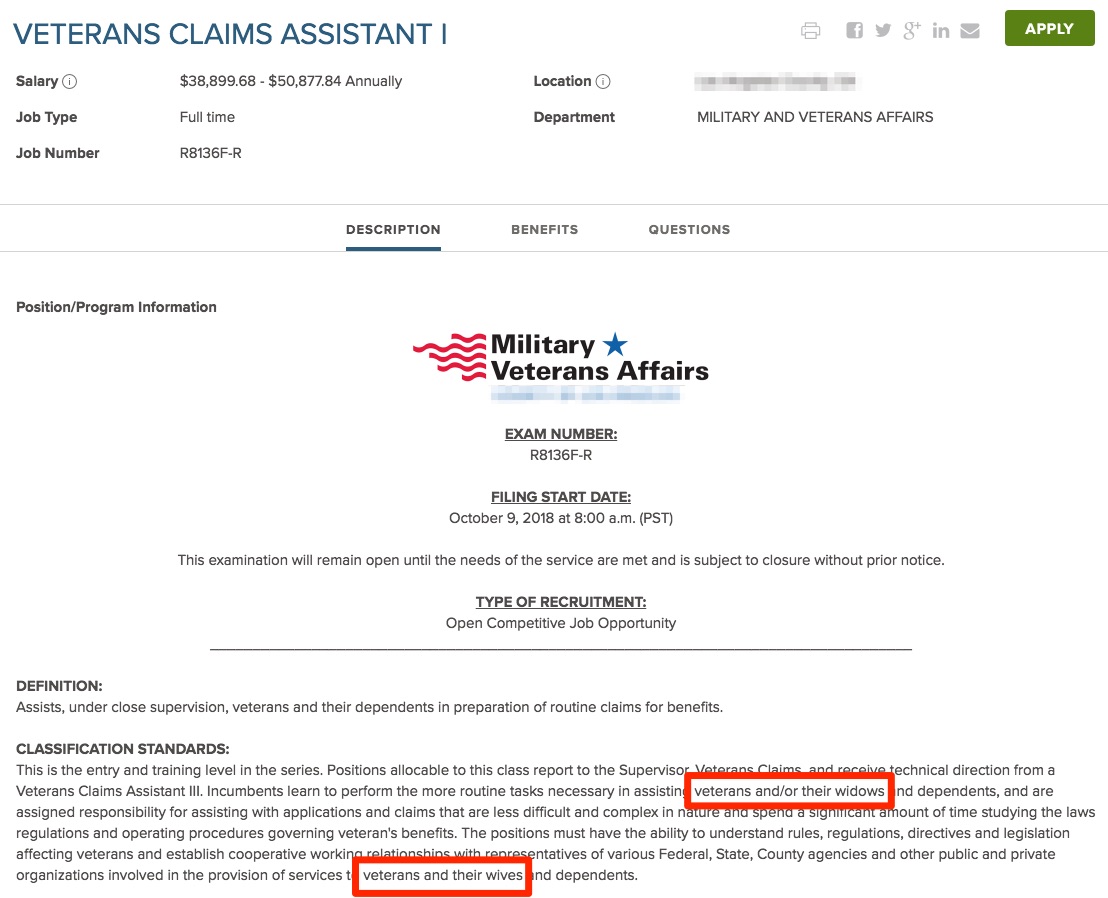 Check out The Top 10 Masculine Biased Words Used in Job Descriptions for the most common masculine word culprits!

And, if you want to have me/Ongig audit a higher volume of your job descriptions for gender bias, go to Text Analyzer and request a demo. We’re happy to give you a freebie.

Here are 2 examples of racial bias in job descriptions:

The cable company below is trying to be cute in their job ad by referencing the terrific movie Driving Miss Daisy (the movie in which an African American chauffeur drives around an older white woman).  Wikipedia described the plot of that movie:

Some people who identify themselves as African American or of dark skin, might be offended by the “Driving Miss Daisy” reference. 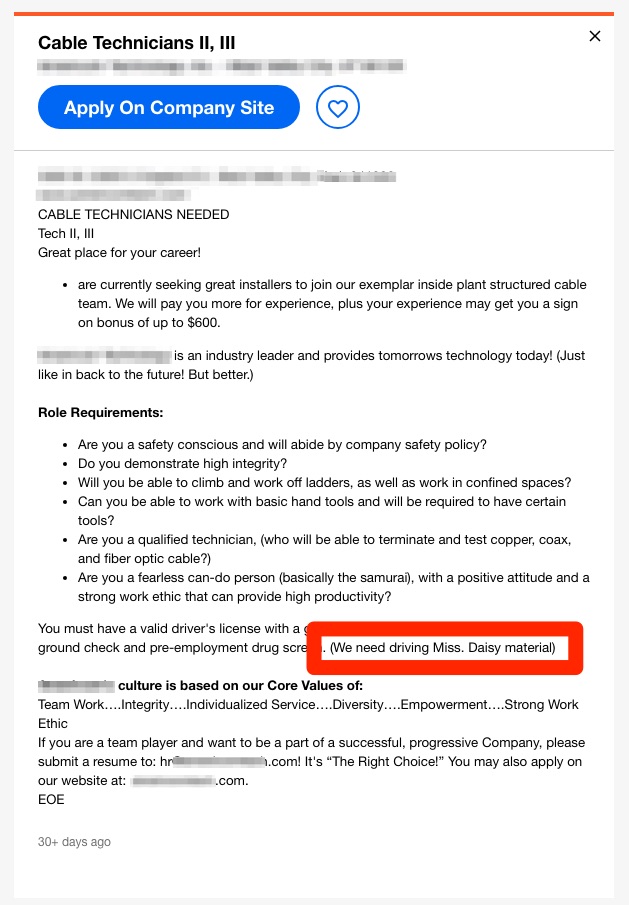 The phrase “Master/Slave” (see below) is used in many database-related job ads. It’s a type of software architecture.

But it’s a bad move.

The Global Language Monitor named this “the most politically incorrect term” of all of 2004.

Consider different language. For instance, tech leaders such as IBM, Microsoft, Amazon Web Services and others have replaced the use of “master/slave” with “primary/replica”

It used to be that you covered both your bases if you used “he/she” and “his/her” language like the job description below.

Now, if you want to be inclusive, you’re best off using “they/their” language. Check out the example below. Ongig’s Text Analyzer flagged the “his/her” language and suggests alternatives like “their” or “you”. 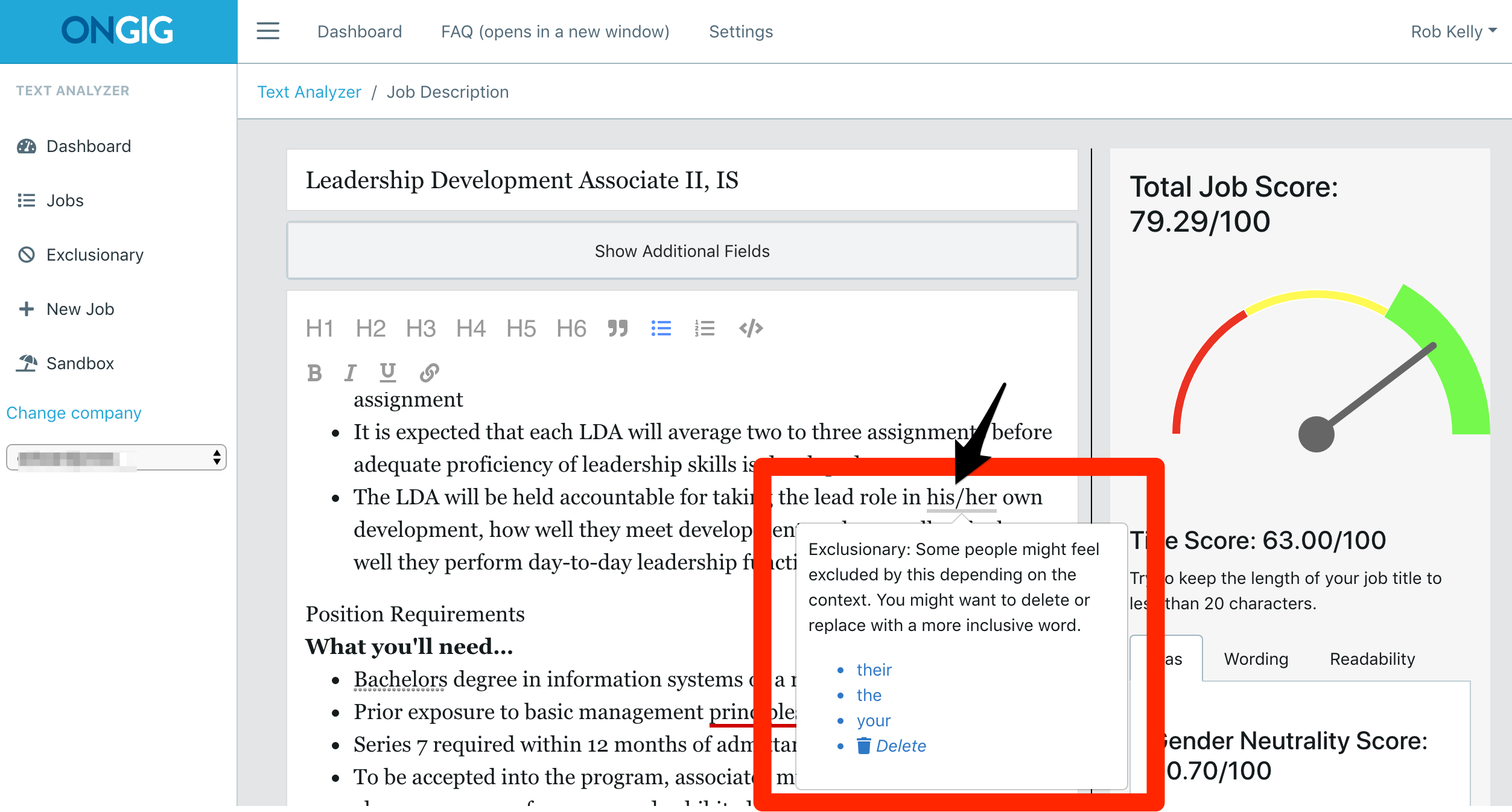 That way you’re including someone who doesn’t identify as a him or her.

Check out 5 Easy Ways to Remove LGBTQ Bias from Your Job Descriptions for more on LGBTQ unconscious bias.

Many employers continue to use the word “Maternity” in the benefits section of the job descriptions.  The definition of maternity is “motherhood”.

When you use the term “maternity” you are excluding any candidate who might want time off related to having a child (even though they are not a “mother” (e.g. a husband, a father adopting someone or someone who identifies as neither a mother or father (e.g. a transgender person). Note: For more on Transgender/LGBTQ bias, see “LGBTQ Unconscious Bias” above). 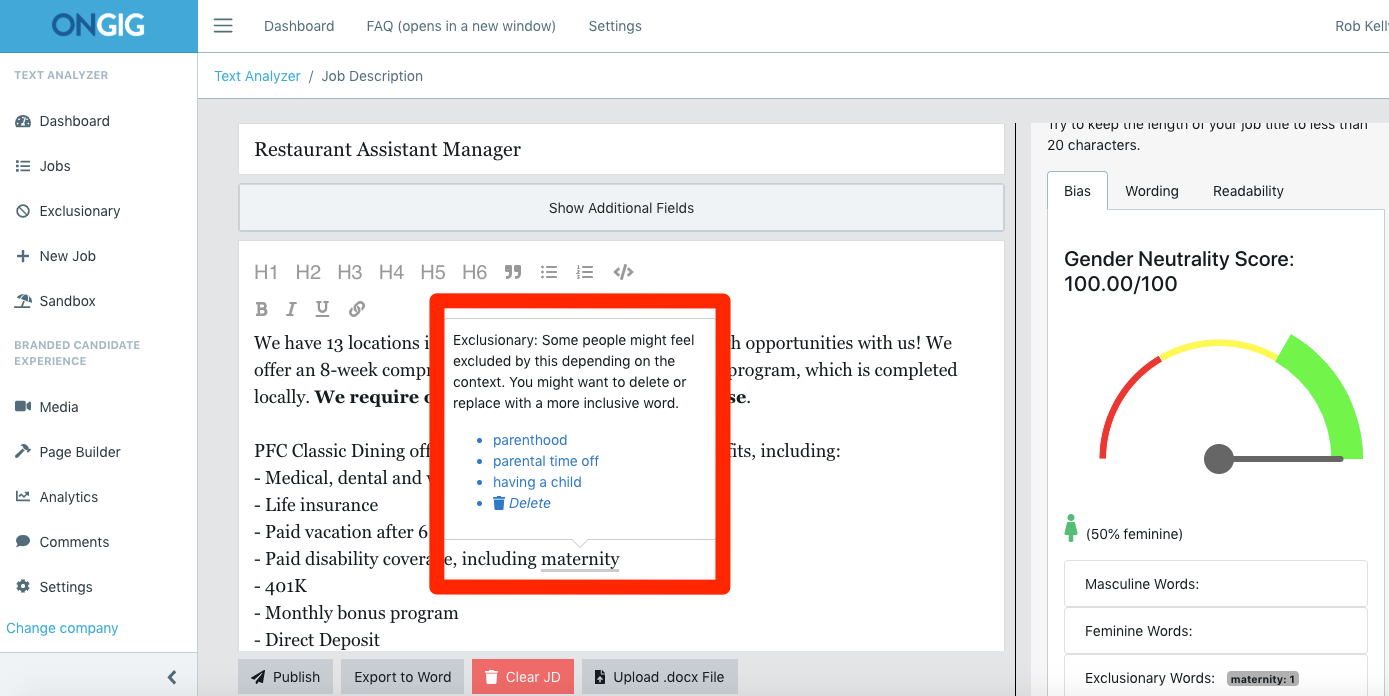 More progressive/modern companies are using alternative words and phrases for “maternity” such as:

“What about if my company provides time off only to mothers (and not fathers or someone who is transgender?”

You’re still better off using phrases like “parental time off” or “having a child” so that you are inclusive to all groups with your language (even if your actual benefit is not inclusive yet).

There are numerous words used in everyday language that turn off someone with (or close to someone with) a disability. 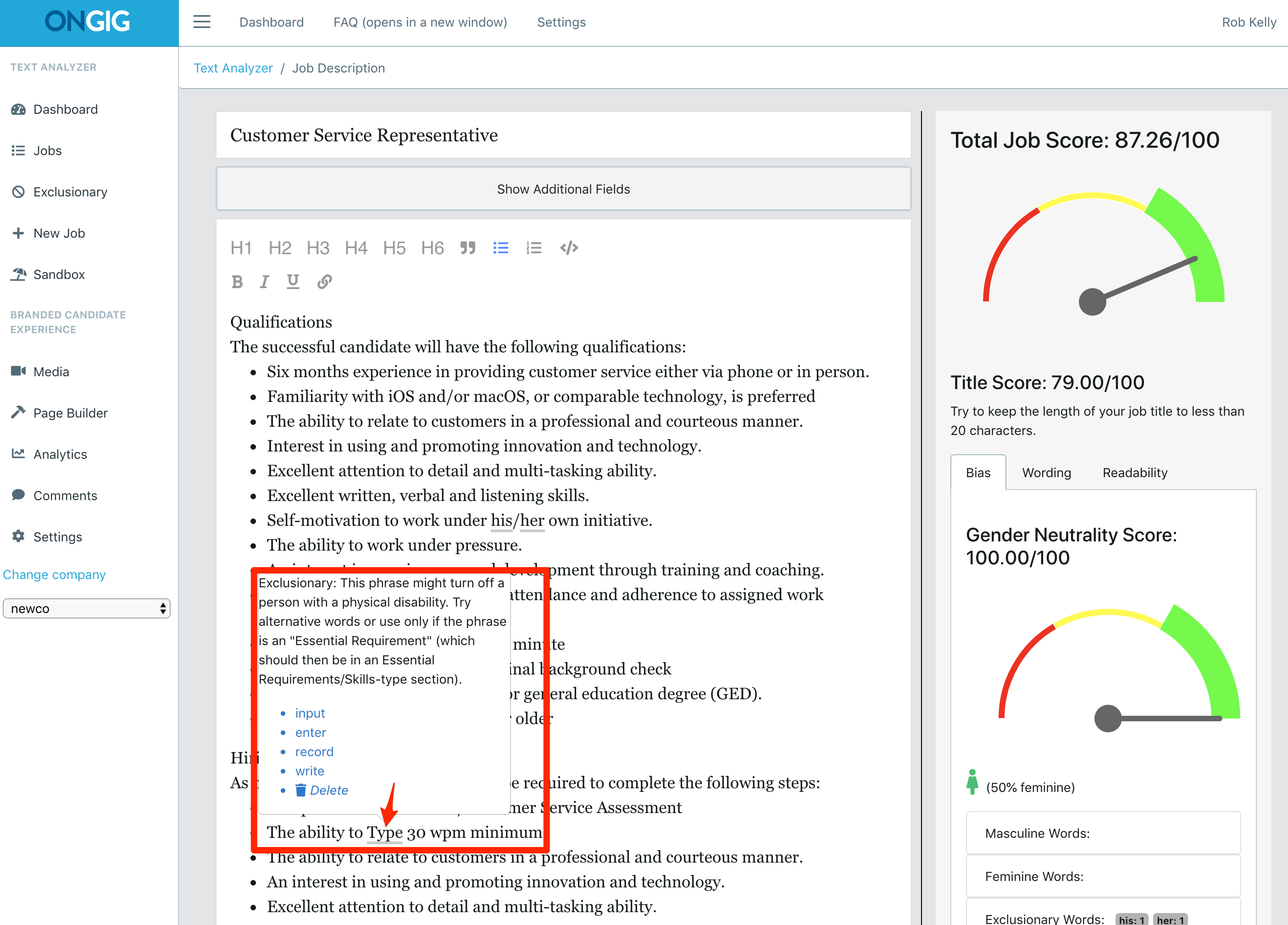 The writer of the above job description uses a common requirement about the candidate needing to “type” at least 30 words per minute.

This bias against people with disabilities is also called ableism.

If you want to be inclusive to candidates (and their loved ones) who might have a disability, check out  10 Tips for Recruiting People with Disabilities in Job Descriptions.

A single word or phrase could not only turn off older candidates but also get you bad HR or even sued. Google had been sued 227 times for age discrimination.

Below are a few examples:

Words like “young” are problematic. So is “digital native” as it suggests you only want to hire someone who’s grown up in the computer/Internet age.
Tip: Instead, try spelling out the skills you need (“familiarity with video games” is better than “digital native”).

2. “Recent College Grad” or “Young” Could be Age Bias

If your job ad mentions wanting a “recent college grad” or needing someone “young and energetic”, you could get slapped with an age discrimination suit.

Dale E. Kleber, a 59 year-old with 25 years of experience, sued CareFusion in 2014 because their Senior Counsel job description stated:

Kleber was not granted an interview and sued CareFusion under the Age Discrimination Employment Act (ADEA), 29 U.S.C. §§ 621-634.

4. What You Leave Out of a Job Description Might Get You Sued

If, for example, you fire an older worker for not being savvy at social media, you’d be better protected if your job description had mentioned: “social media expertise required.”

Whether any of this language is lllegal or not is not the only issue. Even if you the employer wins the case, it can end up being horrible PR for you and legally expensive (Google paid $11 million for their recent set of age bias lawsuits).

For more tips on unconscious bias of age, chek out 6 Ways to Avoid Age Bias in Your Job Descriptions.

What is Elitism or Affinity Bias. As we reported in Elitism in Hiring: Who Needs Harvard?, it’s the belief that people with high education, high intellect, etc. are more likely to succeed than others.

Some people also call this “Likeability Bias” (i.e. I am attracted to others who are “like” me).

However, there’s evidence that elite schools do NOT produce the most productive workers:

See Who Needs Harvard? about the research data from Alan Krueger and Stacy Berg Dale or Indeed’s top school grads don’t outperform their peers in the workplace.

So, you might think twice about writing this type of requirement (see below) in your job ad: 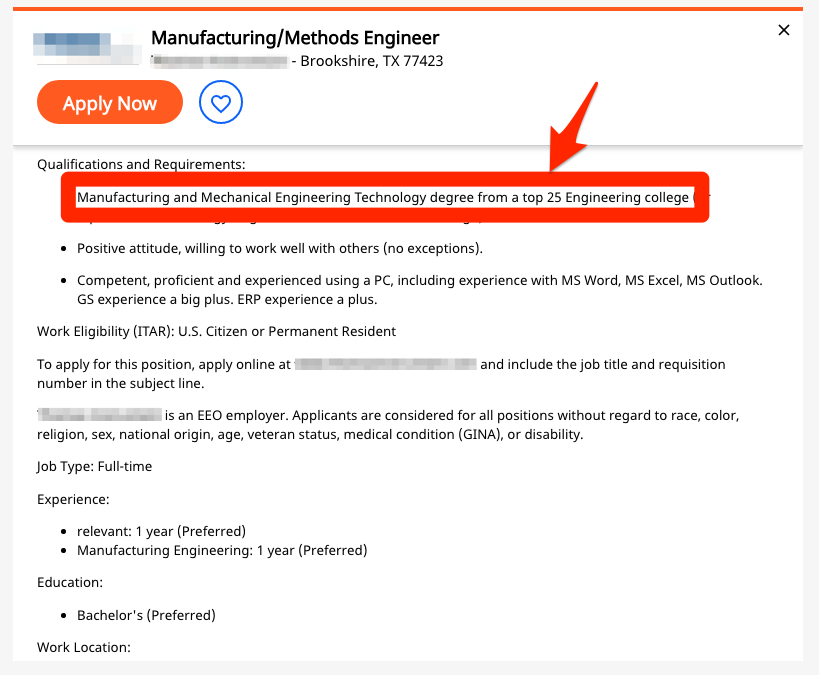 Ongig’s Text Analyzer software helps eliminate unconscious bias from your job descriptions. It finds offensive/exclusionary words and gives you recommendations to replace them. I’d be happy to analyze your jobs to show you examples of unconscious bias. Wouldn’t you prefer to find any bias before your candidates do!?

November 23, 2018 by Rob Kelly in Diversity and Inclusion