Is elitism hurting your hiring? If you’re focused on hiring candidates from top schools or programs, it just may.

What is Elitism? It’s the belief that people with high education, high intellect, wealth, etc. are more likely to be successful than others without such qualities.

However, there’s evidence that elite schools do NOT produce the most productive workers:

Gregg Easterbrook wrote in Who Needs Harvard? about the research data from Alan Krueger and Stacy Berg Dale that shows that:

“The student, not the school, was responsible for the success [of the student’s professional career]”

…or Indeed Research showing that top school grads don’t outperform their peers in the workplace.

Or check out Forget Harvard and Stanford. It really doesn’t matter where you go to college from the Washington Post. Author Jeffrey J. Selingo points out

this nugget from “The Top 25 Recruiter Picks” of graduates top-rated by recruiters:

“…the top five were Penn State, Texas A&M, the University of Illinois, Purdue, and Arizona State. They are all brand-name schools, but they’re also public universities and hardly elite.”

Or the fact that 8 of the top 10 CEOs in the U.S. graduated from public colleges (as opposed to elite private schools).

Fast Company adds this: Despite Other Evidence, Hiring Managers Are Biased Toward Graduates From Top Colleges.

How does elitism affect your hiring?

Elitism in job postings is the example I’m most familiar with. Check out this current job posting below that I found on Indeed (employer name shadowed out). It asks for a “MBA from a top 10 graduate business school.” 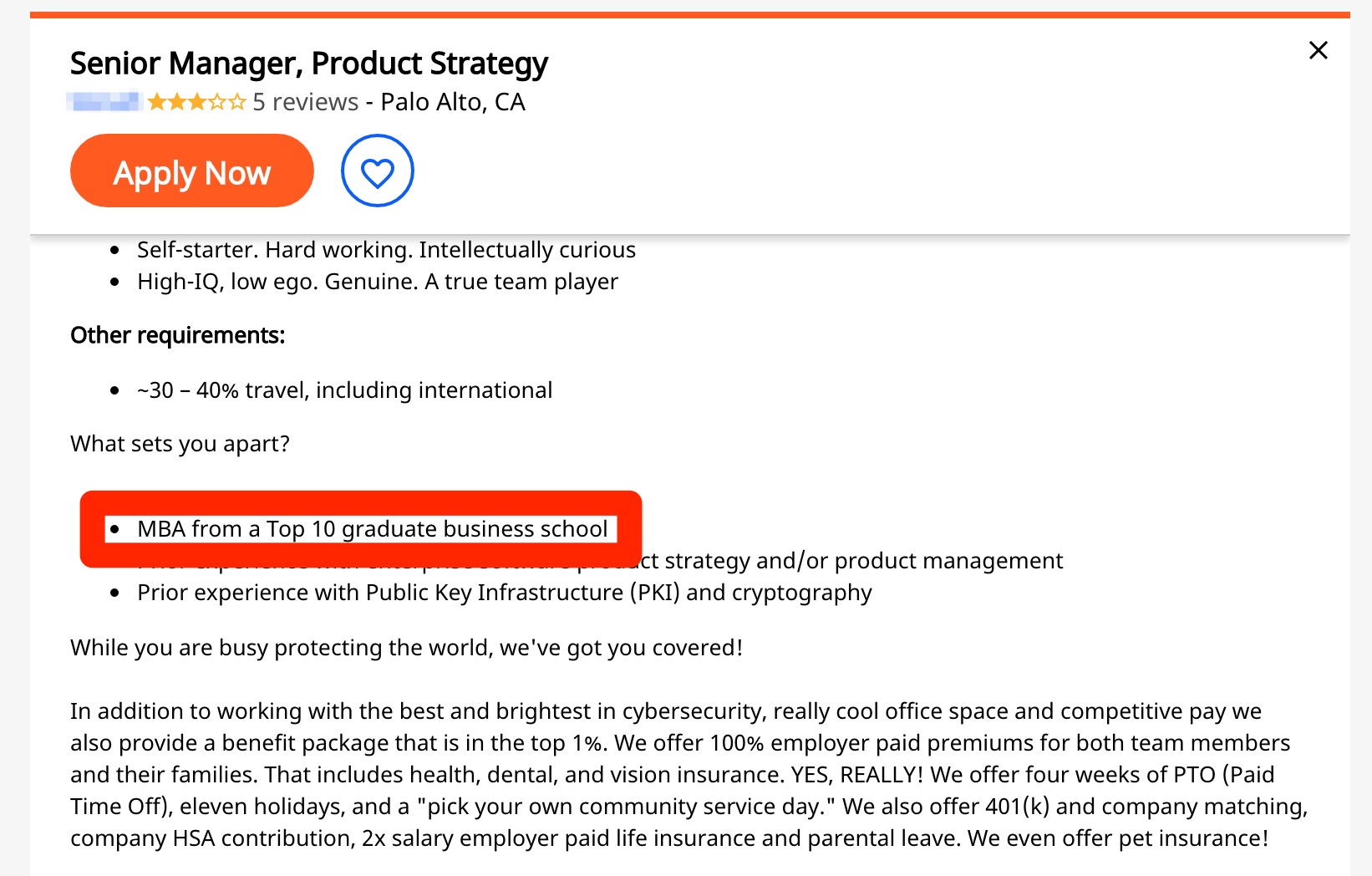 ..what great product candidates is the above employer missing out on?

Here’s another example of elitism on a job ad: 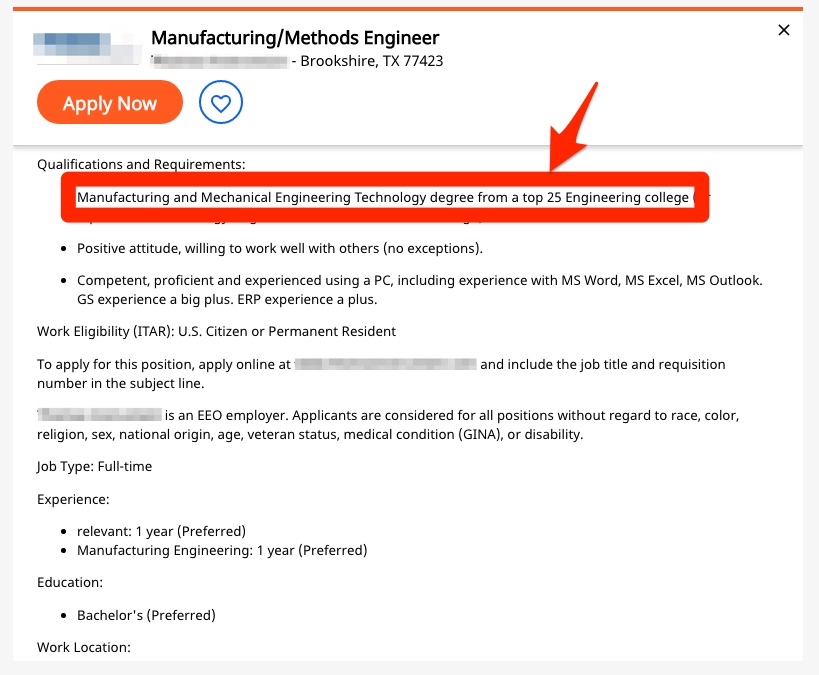 …is a Top 25 Engineering College REALLY a requirement? What if a candidate with better experience went to another school?

And here’s another job posting that says you must have attended an elite school: 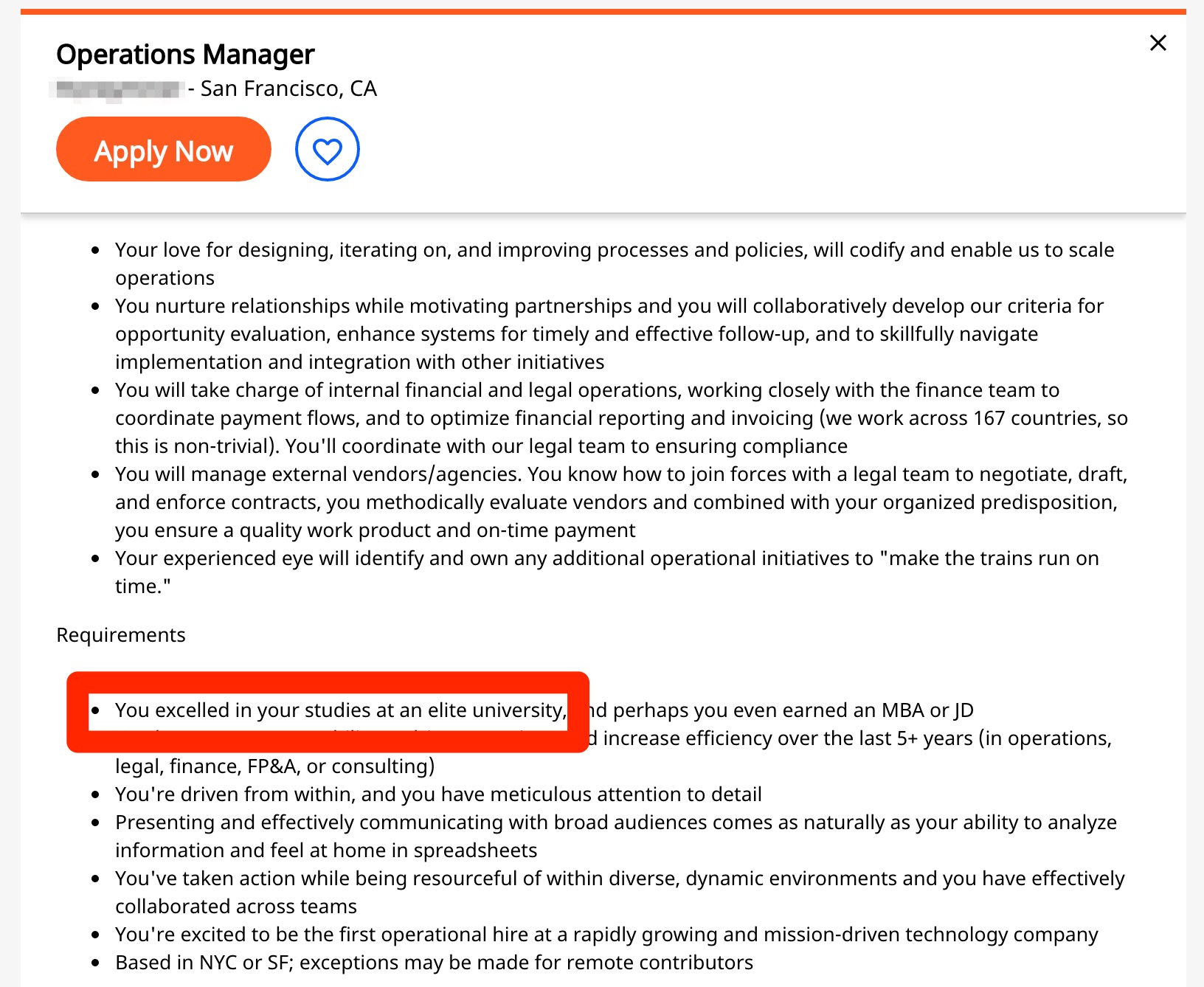 Elitism (or elite bias) is talked about less than other biases.

Amazon Senior Manager Neha Goswami recently shared this in 5 of the Best Diversity and Inclusion Videos:

“Diversity is a very broad term. It doesn’t just include diversity in gender, race or ethnicity. It includes diversity in experience, education and skills. Having diverse teams allow us to think  creatively to solve problems.”

Sometimes the elitism is coming from your hiring manager, as Fast Company’s Lydia Dishman reports:

“The bias appears to come from managers who were students at elite colleges themselves. Thirty-seven percent of managers who reported their alma mater as a top school prefer to hire candidates from top institutions only, versus just 6% of managers who did not. Dovetailing with those findings are the 41% of managers who didn’t graduate from a top-ranked college who said they weigh experience more heavily than a degree.”

One tip to eliminate elitism is to focus on the skills themselves. Taren Stinebrickner-Kauffman points this out in How Your Job Descriptions are Holding Your Organization Back:

“Culturally, we are trained to recognize and highly value qualifications like Ivy League degrees that are more accessible to people with privilege, and to undervalue the skills that come from other forms of life experience. This is a form of structural and implicit bias. Naming and explicitly valuing these oft-undervalued skills will attract candidates with more diverse backgrounds. Brainstorm a list and include them in the job description as job requirements or big pluses“

Another tip to beat elitism is to drop mention of elite schools altogether. Steer clear of phrases like:

Elitism is related to other biases such as:

Why I Wrote This?

Ongig is on a mission to eliminate bias from your job descriptions. Check out our Text Analyzer software for more.

December 5, 2019 by Rob Kelly in Diversity and Inclusion