Do the words in your job descriptions contain LGBTQ bias?

If you’re hiring 100+ people per year, it’s more likely than not that your job descriptions contain LGBTQ bias, according to Ongig’s Text Analyzer job description software.

I’ll give you some tips to remove LGBTQ bias below.

First off, what is LGBTQ? The acronym stands for:

Why should you care about LGBTQ bias?

20% of Millennials Identify as LGBTQ

According to a GLAAD/Harris poll of 2,037 adults, here’s the breakdown of people who identify as LGBTQ by age group:

“People are complex, diverse and can’t just be looped into two groups” (male and female)

34% of GenZ is Not Straight

Another report by IPSOS (2017) in the UK shows that the % of the newer generations who identify as straight is falling:

Gen Z are significantly more sexually liberal than preceding generations; fewer Gen Z report that they are only attracted to people of the same-sex (66%) than Millennials (71%), Gen X (85%), and Baby Boomers (88%).

The 5 examples of LGBTQ bias below are often cases of unconscious/implicit bias (i.e. not deliberate)  — but the end-result is the same: you’re losing candidates and your employer brand suffers.

5 Tips to Remove LGBTQ Bias from Your Job Descriptions

I took Ongig’s Text Analyzer software and ran some Indeed job postings through it.

Here are 5 LGBTQ bias problems I found and how to help avoid them.

One of the most common examples of unconscious LGBT bias is personal pronouns. 114,604 jobs on Indeed use the phrase “his/her” like the job below.

Job description writers mean well when they use “his/her” or “he/she” type language, but they are excluding any candidates who don’t identify with male/female.

Check out the job posting below — it uses “his/her” when “their” is the more inclusive choice. 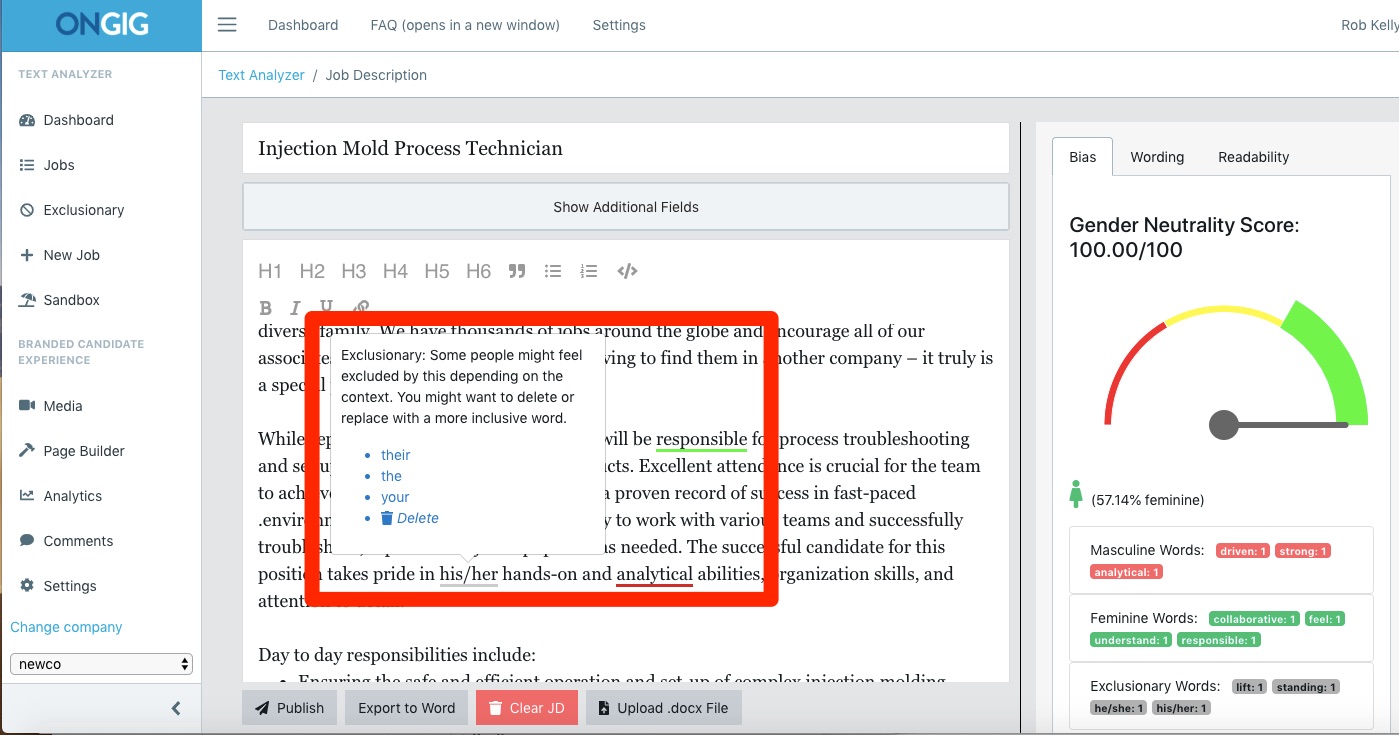 20,526 jobs on Indeed share a common mistake: they include the words “men and women” like “seeking men and women” in the ad below.

That’s exclusionary to the Transgender and Questioning members of LGBTQ. 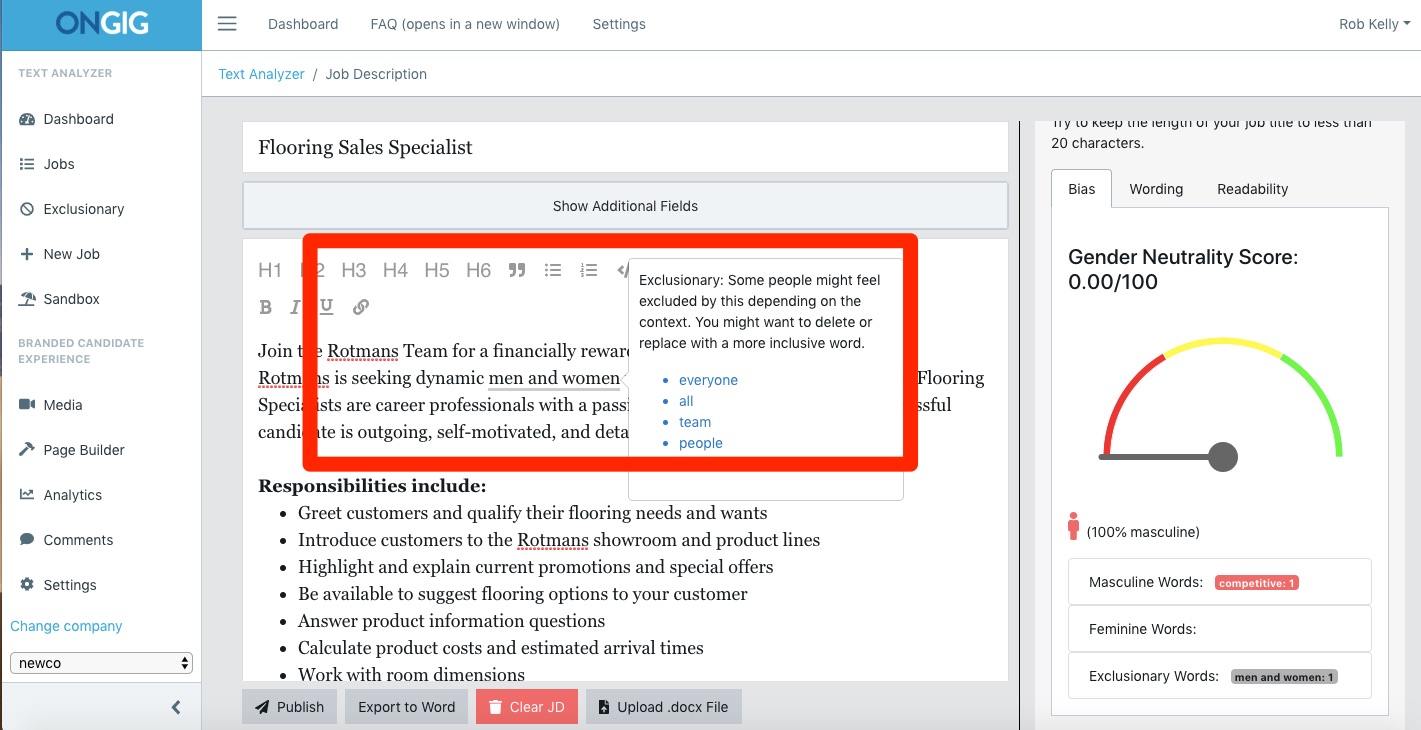 Another common LGBT bias is to use phrases having to do with maternity. 21,050 jobs on Indeed mention “maternity”.

The problem with “maternity”, like in the job posting below, is that it’s associated with women so you’re excluding at least 2 scenarios: 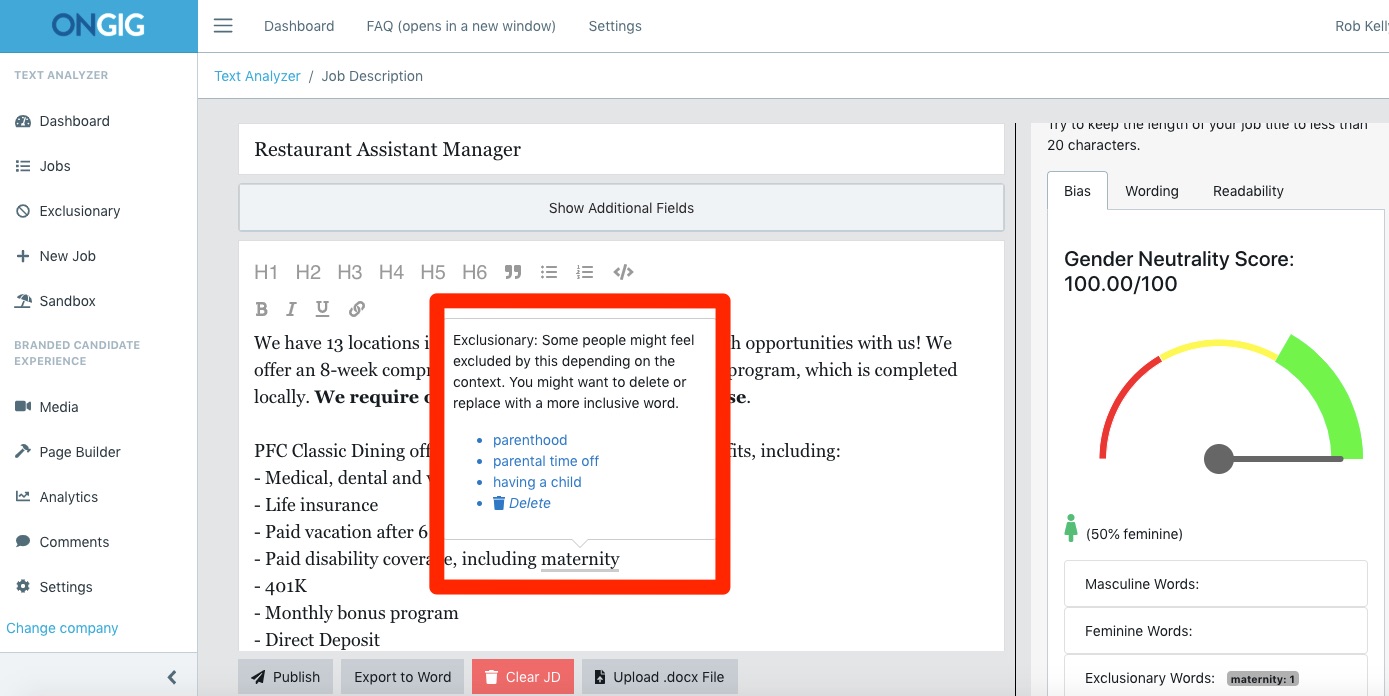 You might also be alienating men if you don’t mention paternity, Ongig’s Text Analyzer recommends taking the all-inclusive route and use a phrase like “parental time off” or “having a child”.

Tens of thousands of job ads I found on Indeed, like the one below, mention “mom and dad” or “mother and father”.

Again, many within LGBTQ don’t identify with being male (a father) or female (a mother). And other parenting scenarios include 2 mothers or 2 fathers.

The inclusive alternative phrase is “parent”.

I found 500+ job postings on Indeed, like the one below, that mention phrases like “mother rooms” and “mother stations”.

You’re better off describing the room by its function than by a gender-oriented audience.

For example, for the job ad above, they’d be better off using “nursing rooms” or “lactation rooms/lounges”.

My team and I at Ongig are on a mission to transform your job descriptions. As part of that, our Text Analyzer software analyzes all of your job posting text and gives recommendations on how to remove any bias.

Text Analyzer is especially helpful when you have hundreds or thousands of job postings to sift through. Just one poor word or phrase can lose you candidates or worse (bad PR that goes viral or even gets you sued). Please click the demo request button if you’d like to learn more about Text Analyzer.

August 27, 2019 by Rob Kelly in Diversity and Inclusion