There has been a lack of diversity in engineering for years, and many companies are focusing on how to tackle this issue. We found 5 tips to help guide your recruiting diversity in tech efforts.

But first, here are some stats on the most affected underrepresented groups:

According to Wired, people of color in tech (Black, Latine, and Indigenous professionals) make up less than 5% of the workforce at major tech companies. In September, Computer World also published stats that said “just 6.8% of computing and math-related jobs are held by Black and Latine people today.”

Percentage of women in tech

Women and women of color in tech are also underrepresented in the tech industry. The TrustRadius 2020 Women in Tech Report shows that:

“Women of color are less confident in their opportunities for growth in the field than white women. They may face discrimination not just because they’re in a gender minority, but also a racial minority. 2 out of 5 women of color doubt their opportunities for growth in the industry, whereas only 1 in 3 white women has this concern.”

Another glaring statistic on the percentage of women in tech is shown below: 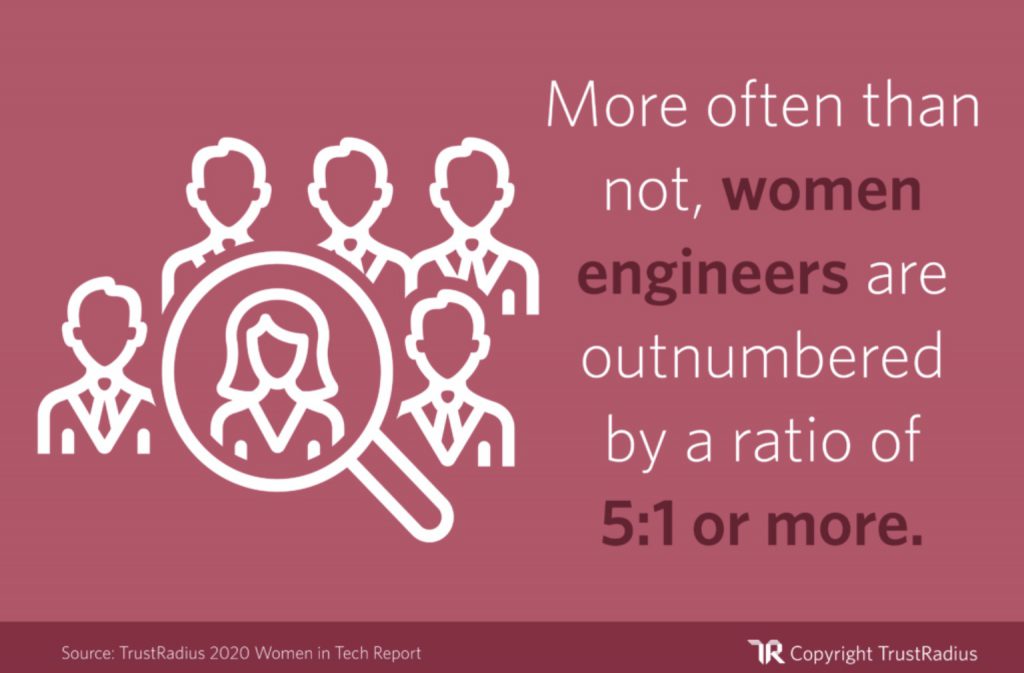 Now, here are the 5 tips for hiring for diversity and inclusion in tech:

Inclusive language plays a critical role in fostering an environment where everyone belongs. At Twitter, the language we have been using in our code does not reflect our values as a company or represent the people we serve. We want to change that. #WordsMatter https://t.co/JVO8968B7K

The screenshot below shows a Data Scientist job description using the word “blacklisting” which is considered exclusionary to people of color in tech. Using more inclusive synonyms like the ones listed in the pop-up box removes bias that might make some people feel excluded. 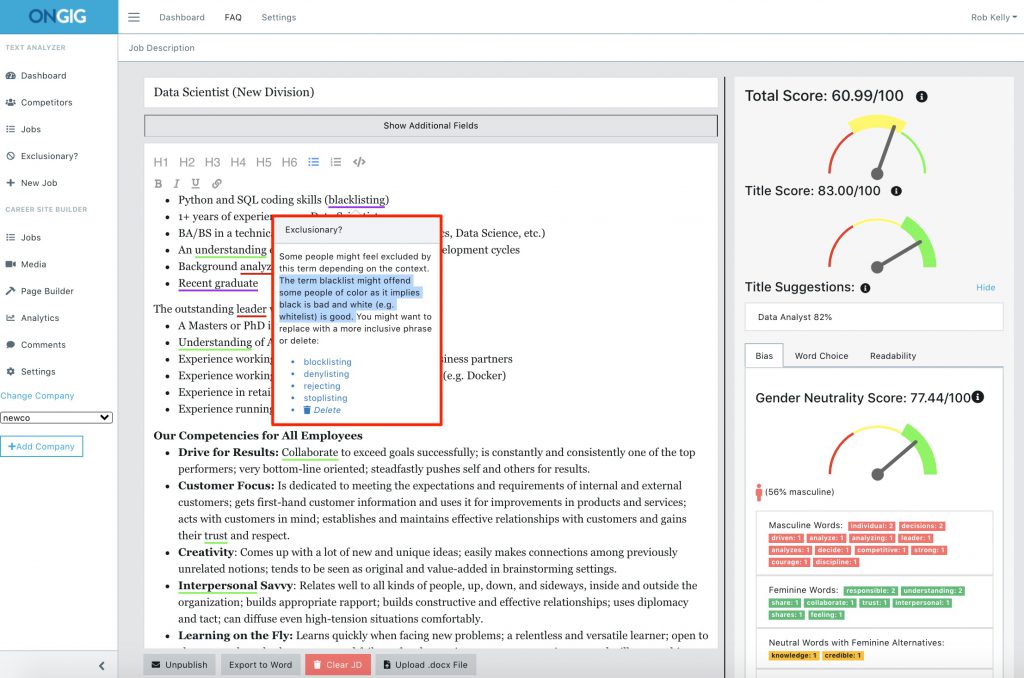 The Chief of Staff job description below shows masculine bias. Words like “competitive” can be replaced with words that do not contain gender bias towards women or women of color in tech. 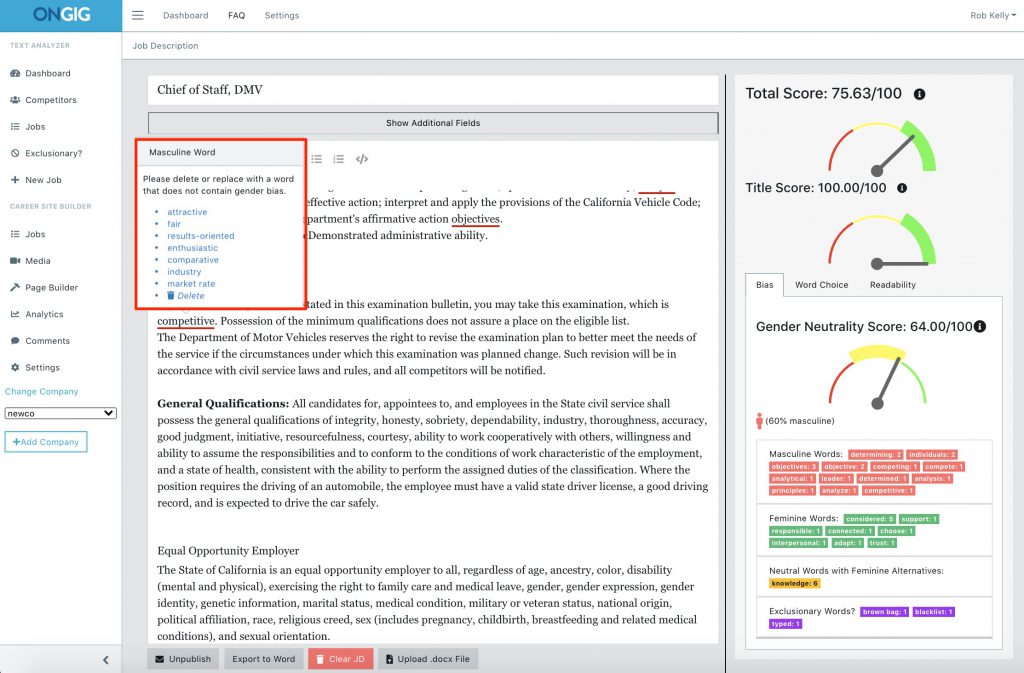 An article by Forbes on Achieving Workplace Diversity Through Recruitment In Tech says:

“It is also crucial to avoid gender-coded words like “guru,” “rockstar,” “aggressive” or “independent,” and look for collaborative team players instead with words like “dedicated,” “sociable” and “conscientious.” There is evidence that women are less attracted to terms that focus on competition as opposed to terms that depict commitment and support. The goal is to remove gender-biased terms in the hopes of increasing the applicant pool.”

Companies regularly modify their job descriptions to include language that supports inclusive hiring. According to Hacker Earth:

“Buffer uses its blog as a medium to explore issues in tech which affect underrepresented groups. The company also regularly modifies its job descriptions to include language and images that support inclusive hiring. They also sponsor awesome initiatives such as POCIT‘s Beer and Boardgames event and #wocintech‘s awesome photos.”

Another idea is to set company-wide goals for hiring diversity in engineering. The companies below have invested dollars and set goals to hire more underrepresented groups in tech roles:

(Editor’s note: For more company goals beyond diversity and inclusion in tech, check out 25+ Examples of Awesome Diversity Goals.)

In 2011 Etsy only had 3 women engineers out of 47. So they invested in the goal of training junior women engineers through their Hacker School, in partnership with 37Signals and Yammer.

By 2013, Etsy’s engineering diversity increased by 500%, with an engineering team of 20 women and 90 men, according to FastCompany.

3. Use blind hiring tools for diversity hiring in tech

You can also increase diversity in engineering by using blind hiring tools. Companies that use tools that remove the potential for bias throughout the hiring process have a better chance of finding more diverse employees. 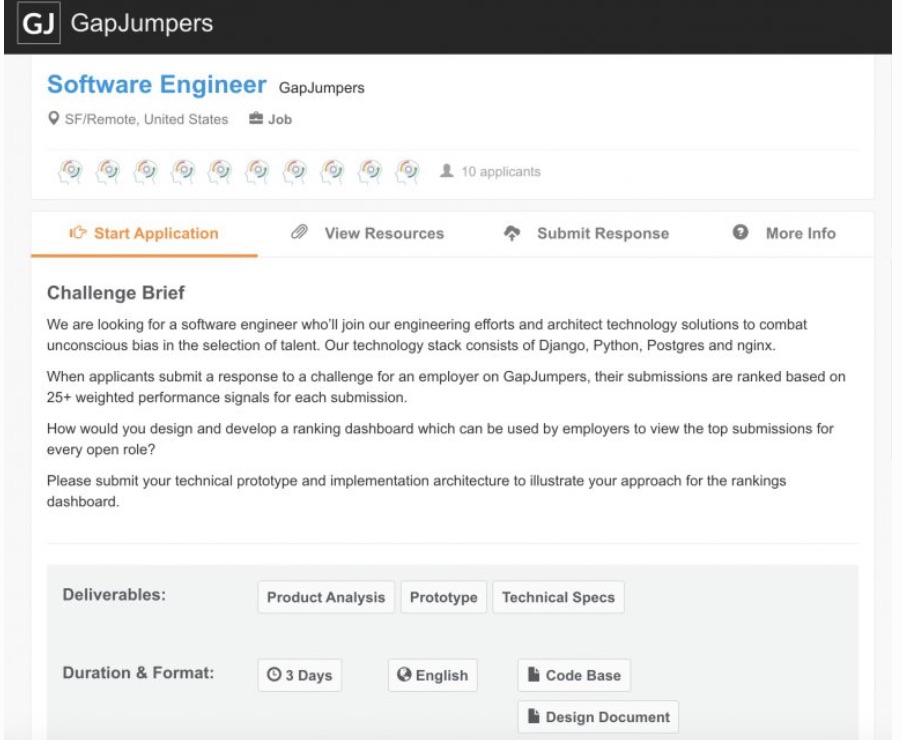 Tech talent is often on the spectrum or assumed to be, and many of the best engineers have ADHD. One of the world’s most famous autistic people, Temple Grandin, once said in an interview:

“Because autistic people think in pictures, they may be particularly good at technology.”

Giving neurodiverse candidates the opportunity to showcase their skills anonymously is often more valuable than an in-person interview. A recent virtual conference on Eliminating Bias from Hiring focused success with increasing neurodiversity in engineering roles by using skills-based hiring. Someone with autism or ADHD may not perform well in interviews but excel in a project designed around “real life” tasks for a job.

Here are a few famous tech leaders who are rumored to be neurodivergent:

Other blind hiring tools like Pinpoint Recruitment, Blendoor, and Entelo remove details from a resume that could cause bias towards diverse engineers. Pinpoint Recruitment’s Blind Resume tool makes candidate resumes anonymous. The Pinpoint tool reads applicant data, then presents a redacted resume to the hiring manager. The screenshot below shows “Pink Peas” as an applicant and their personal data is hidden for the candidate screening process. 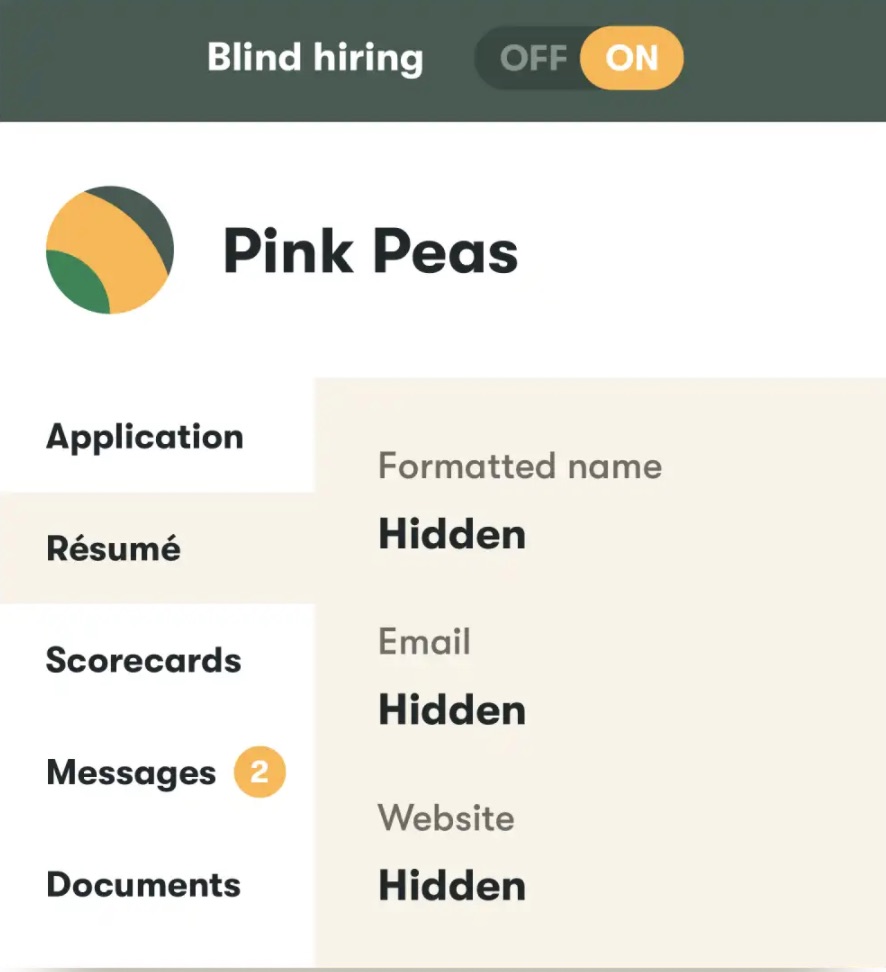 A recent post from Codility on How Tech Companies are Paving the Way for Diversity in Engineering quoted Brian Reaves, Dell’s Chief Diversity and Inclusion Officer. Reaves said:

“We see tremendous opportunity to use technology to eliminate personal bias from how we recruit, to how we hire and promote.”

Recruiting from coding camps or programs focused on diversity recruiting in tech is another idea. One example of a company that has success with this is Slack. According to Hacker Earth:

“Since 2015, the company has proactively sought out candidates from outside traditional developer pipelines such as Stanford and MIT. It has also focused on recruiting tech talent from all women’s coding camps such as Hackbright and programs that focus on training black and Latino programmers such as Code2040.”

AngelList lists 41 Companies That Hire Coding Bootcamp Graduates on their website. A few companies on the list are:

Outside of coding camps and programs for engineering diversity. There are quite a few diversity recruitment websites that cater to diversity recruiting in tech. Arshiya Malik’s post on Medium lists some companies who are connecting employers to diverse pools of talent. Here are a few directly from Arshiya’s blog:

If you want to know how to find highly qualified diverse candidates in engineering, another idea is to highlight diversity in engineering on your career page.

Elastic’s dynamic career page, pictured below, showcases employee stories in a special section called “Someone Like Me”. One feature is a story from Liza Dayoub on women in open source. 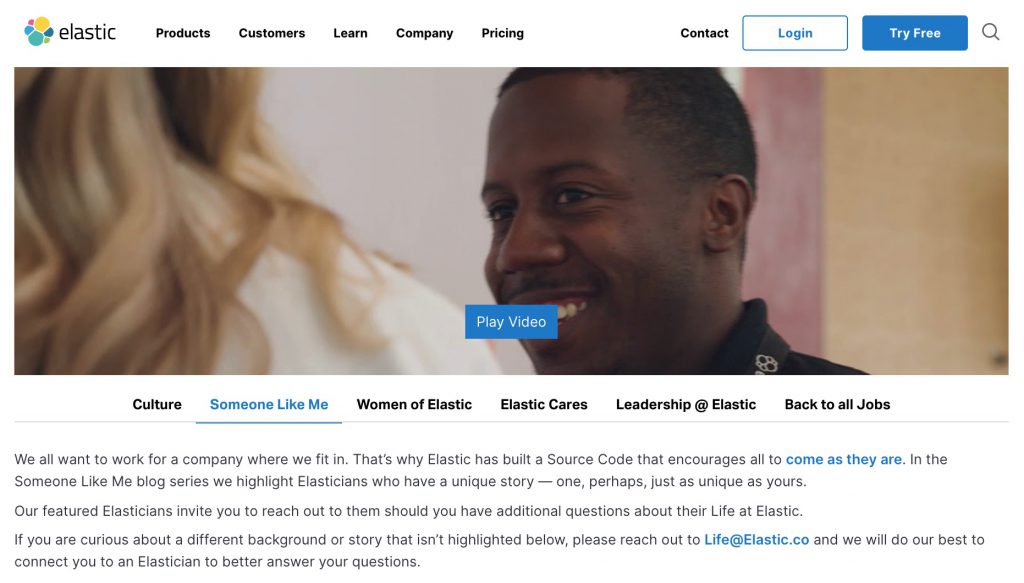 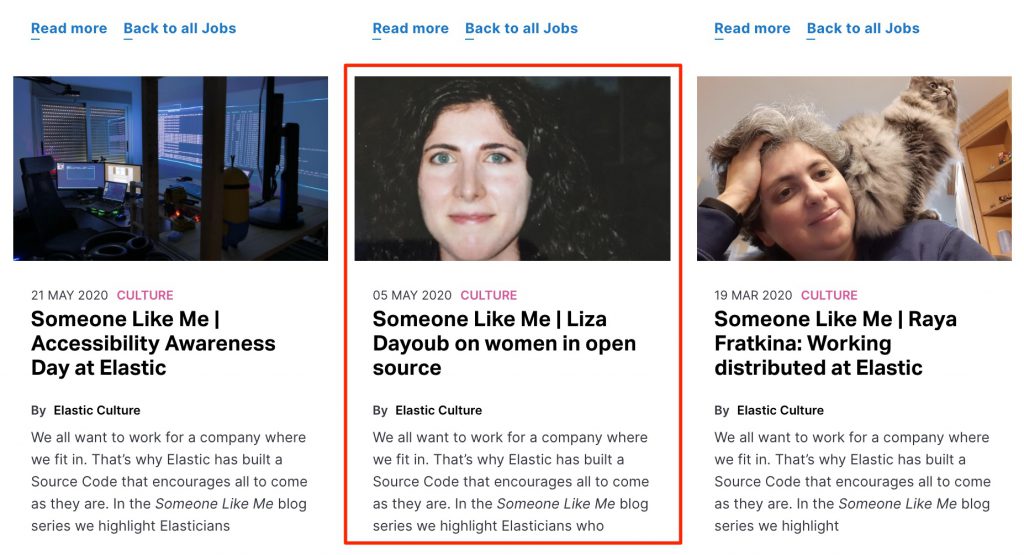 Tools like Ongig’s Career Site Builder make it easy for you to create custom microsites for diversity in the tech industry on your career page.

December 7, 2020 by Heather Barbour in Diversity and Inclusion