On October 14th I attended the Neurodiversity Rising — Eliminating Bias in Hiring virtual conference hosted by Neurodiversity in the Workplace (NITW). This was the event line up: 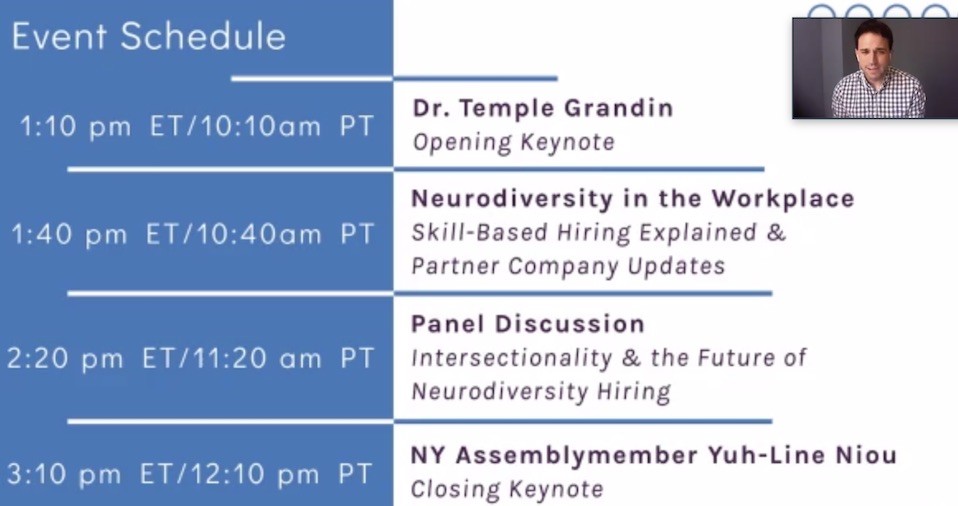 The virtual conference was informative and the speakers had a powerful message.  Here are some informational nuggets that you might find useful for neurodiversity hiring.

The main topic of the virtual conference was around inclusive employment, especially related to neurodiversity. The presenters helped define neurodiversity as:

“natural variances in the brain that result in different ways of thinking, learning, and socializing”

[Note: For more neurodiversity definitions and details, check out our blog Neurodiversity: The Definitive Guide.]

Another topic covered in the virtual conference was intersectionality. According to the presenters, this term was coined by Kimberlé Crenshaw and is defined as:

“the complex, cumulative way in which the effects of multiple forms of discrimination (such as racism, sexism and classism) combine, overlap, or intersect especially in the experiences of marginalized individuals or groups” 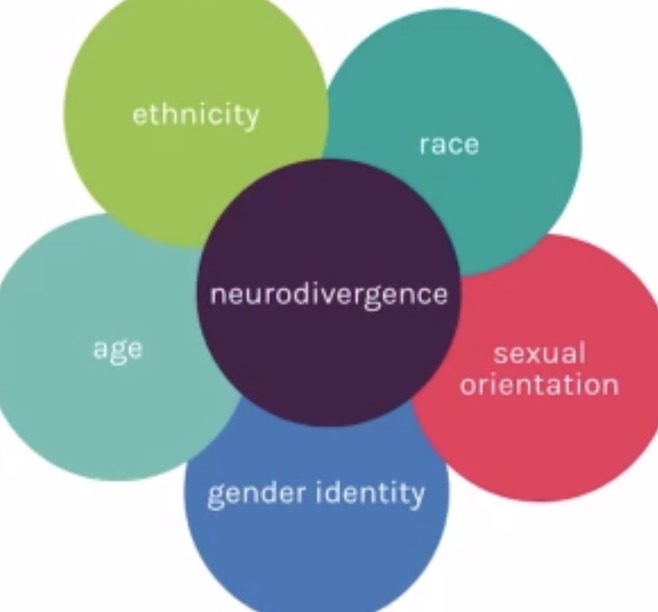 Eliminating bias through skills based hiring

The speakers focused on using skills based hiring to remove:

“a talent acquisition method that cuts through bias by focusing solely on candidates’ competencies in role-related skills.”

By using this method in your neurodiversity hiring strategy, you can:

Many of the over 1,500 attendees asked questions about how neurodivergents should prepare for interviews. The main consensus was that companies having success with hiring neurodiverse employees have moved away from traditional interviews in favor of using skills based projects to match a candidate’s skillset to a role. For example, someone with autism may not perform well in interviews but excel in a project designed around “real life” tasks for a job.

Dr. Temple Grandin recommended that job seekers who are neurodiverse should “find their skill” and use their neurodiversity as a competitive advantage. Dr. Grandin, who has asperger’s syndrome, has had success doing what she was good at. She said both candidates and employers should focus on that for more positive results during the hiring process.

Some of the speakers mentioned being faced with discrimination based on being neurodiverse (among other things) when looking for jobs in the past. The goal of NITW’s efforts is to address how that bias affects employment. Some top companies are taking action by implementing programs around hiring people with autism, dyslexia, dyscalculia, ADHD, and Tourettes.

Here are a few having some major success:

Adam Brown is VMWare’s Neurodiversity Program Ambassador and also has an autistic son. During the virtual event, Brown spoke about his passion for the Neurodiversity Inclusion Program and its focus on hiring people with autism. The image below is from VMware’s neurodiversity page.

“While race, gender, sexual orientation and religion are common diversity and inclusion focus areas, employees across the spectrum of cognitive functioning — including those with autism, ADHD, Asperger’s syndrome and dyslexia, for example — are too often overlooked. More than 80% of those on the spectrum are unemployed or under-employed in the United States, according to pre-pandemic estimates from Stanford University.

JPMorgan Chase employs 200 people on the spectrum in eight countries and over 40 different job roles. During the virtual conference, Lee said it’s really about finding the right managers and that disability does not equal inability.

Sarah Loucks, Autism at Work Global lead at SAP, talked about their success with the Autism at Work program since its inception in 2013. SAP has an Autistic Advisory Board and over 180 autistic employees across 16 countries. The video below shows more about the program and SAP’s focus on neurodiversity in the workplace:

Quotes from the experts on neurodiversity

Each speaker had the opportunity in either a keynote or during the panel, to give advice or thoughts on neurodiversity in the workplace. Here are some of their statements:

“Let’s short circuit the interviews… I would just show off my portfolio of drawings… That’s how I got jobs, selling the work. With different kinds of minds, you can work on teams that complement each other.”

“There is this idea that birds of a feather flock together [in hiring]. This, as we know, really leads to exclusionary processes for people… from disadvantaged backgrounds. There is this phenomenon of the strength of weak ties. The person who is most likely to get your next job… is likely to be the person you met in line at the grocery store.”

“It’s important for folks to remember that you are you… And that’s beautiful, and it’s awesome… You’re always going to be ‘too something’ for someone. But you’re going to be a great fit for someone else.”

“I consider it my special way or special power. I see things differently and others don’t. I often think that autism is a strength in its way.”

Shout out to Bridget McElroy and Joe Riddle for hosting such an excellent event!

Ongig is on a mission to eliminate boring and biased job descriptions. As part of this, we try to share best practices on all aspects of diversity. For example, Ongig’s Text Analyzer helps you avoid words that are exclusionary to neurodiverse people. For even more info on neurodiversity, visit our blog Neurodiversity: The Definitive Guide.

October 19, 2020 by Heather Barbour in Diversity and Inclusion