We found 650+ famous people with disabilities during our recent research on neurodiversity. What is an example of a disability? According to Disabled World:

“A disability is often used to refer to individual functioning, including physical impairment, sensory impairment, cognitive impairment, intellectual impairment, mental illness, and various types of chronic diseases. A disability can be present from birth, or occur during a person’s lifetime.”

This long list of famous people with disabilities includes:

“The 16-year-old singer took to Instagram to set the record straight after compilation videos of her tics began to surface online. Tourette Syndrome is a neurological disorder that causes a person to have involuntary physical or verbal tics. In Eilish’s case, she exhibits physical tics, not verbal.” 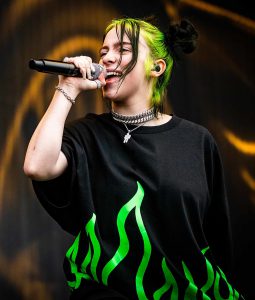 Disclaimer: This is a list of successful people with disabilities who have been diagnosed and those who have been reported or rumored to have disabilities. I do my best to list resources at the end of this article and welcome feedback, additions, and edits! I am not an expert on famous disabled persons.

Actors with Disabilities [& other Entertainment Professionals]

There are hundreds of successful entertainment pros and celebrities with disabilities. Do you know any blind actors? Rolling Stone reported in 2017 that Johnny Depp is blind in his left eye.

What type of dwarfism does Peter Dinklage have? He was born with achondroplasia, a common form of dwarfism. (image source: Gage Skidmore)

If you have ever watched the television series Breaking Bad, you may have asked, Is Walter Junior disabled in real life? The answer is yes, RJ Mitte has Cerebral Palsy just like the character he plays on the show.

According to Wikipedia, Mitte’s manager “sought acting opportunities where his disability would serve to educate viewers, which led him to audition for the role in Breaking Bad.”

Chris Rock is one of the famous people with learning disabilities. (image source: Wikipedia)

In a recent post by Self Magazine, Chris Rock Reveals He’s in Therapy to Help Manage a Nonverbal Learning Disorder. This means Chris Rocks joins famous people with learning disabilities who have gone public.

“After a friend suggested Rock might have Asperger’s syndrome, an autism spectrum disorder, he went in for nine hours of cognitive testing, he said in the interview. After that Rock was diagnosed with a nonverbal learning disorder (NVLD), which affects his ability to read nonverbal social cues.”

These disabled artists were successful in their creation of masterpieces despite having a disability.

How did the famous Mexican painter Frida Kahlo manage her disability? Respectability.org said:

We found 90+ famous athletes with disabilities, this list includes famous people in wheelchairs and amputee athletes. Aaron Wheelz Fotheringham made the list. Known for his extreme wheelchair stunts, Fotheringham was born with Spina Bifida. This video from Nitro Circus shows him doing the first wheelchair frontflip in the world:

One of the UK’s most popular famous disabled female athletes is Paralympic swimming medalist Ellie Simmonds. The Daily Record reported:

“Born with achondroplasia, a genetic mutation which causes dwarfism, she refused to let her disability define her. She battled back from painful surgery to straighten her legs and became Britain’s youngest ever individual medallist.”

These famous paralympians have more than 10 gold medals (and many other silver or bronze!):

Famous Paralympians to watch at the Tokyo Olympics

Famous Scientists with Disabilities [and Inventors]

Many of these scientists are rumored to have a disability. Among famous people with learning disabilities is Temple Grandin, who is very open about being on the autism spectrum.

What disability did Stephen Hawking have? The famous Physicist was diagnosed with ALS in 1963.

Mathematician John Nash is one of the most famous people with intellectual disabilities. The 2001 film A Beautiful Mind was based on the story of his life managing his disabilities.

This list of famous successful people with disabilities includes politicians, company creators, and activists. Does Erin Brockovich have Dyslexia? The famous environmental activist struggled with her learning disability in school but has still been very successful. She said:

“Life is full of challenges whether you are learning disabled or not. It’s how you handle those challenges.”

Tim Ferriss is the author of the popular book 4-hour Work Week. In an interview with Lifehack.org, Ferriss opened up about his struggles with Dyslexia and Dysgraphia in school:

“Writing this book required me to conquer serious inner demons. I was mildly dyslexic at a young age and still have a lot of trouble with dysgraphia: miswriting and mixing up letters. Finishing my senior thesis in college almost killed me, and this book was more than twice the length.”

Are there are famous disabled people of color? Yes, absolutely! Known for her work as a Civil Rights Activist, Barbara Jordan was diagnosed with multiple sclerosis later in 1973, according to Wikipedia.

Authors with Disabilities [and Poets]

There are loads of famous disabled authors and poets. Agatha Christie is a well-known author who has been diagnosed with Dyslexia and Dysgraphia. A blog about Agatha Christie said:

“In no way did dyslexia stop Agatha from learning to write well and establishing herself in a creative profession so dominated by men.”

Victor Villaseñor books gained popularity in the United States despite the popular author dropping out of school in 11th grade. According to Dyslexic Help:

“Unknown to both himself and others until well into his adult life, Victor Villasenor was dyslexic – a disability he later called his gift which allowed him to “see patterns that other people couldn’t see”.”

Ray Charles known as the pioneer of soul music is one of the most famous musicians with disabilities. An article on Ray Charles says:

“Ray Charles did not lose his sight until he was about seven years old. Years later, doctors suggested that juvenile glaucoma had caused his blindness. But Charles always maintained that his visual impairment never hindered his career in any way.”

What disability does the kid from Stranger Things have?

Two of the cast members of Stranger Things have been successful in their acting careers. Millie Bobby Brown is hearing impaired according to Glamour Magazine.

And CBS News reported that actor :

“has cleidocranial dysplasia, a condition which affects the development of the teeth and bones. His character on the Netflix series, Dustin, also has the condition.”

Ongig is on a mission to eliminate boring and biased job descriptions. As part of this, we try to share best practices on all aspects of diversity. For example, Ongig’s Text Analyzer helps you avoid words that are exclusionary to famous (or non-famous) people with disabilities. Please visit Ongig if you’d like to learn more.

July 26, 2020 by Heather Barbour in Diversity and Inclusion