The hiring world is being radically shaped.

Not to be dramatic, but we think that this will affect each of you reading this.

Towards that end, this article is dedicated to the 7 major reasons/trends that will contribute to this new hiring/jobs world.

1) A Hire Is A One Million Dollar Transaction

A hire is the most important transaction an individual or employer can make.

In fact, we put a number on it: $1 Million…as in, each hire in a business is worth one million dollars (you may have noticed that Facebook’s own Director of Corporate Development Vaughan Smith recently told the NY Times “Engineers are worth half a million to one million.”)

Let us use some data to explain:

Kayak.com CTO Paul English adds that a worker could be even more valuable:

Despite the fact that a hire is worth around $1 million, the majority of job postings used to attract these candidates really stink.

2) Candidates Want to Know Who They’ll Be Reporting To

One of the most important job factors is who the candidate will be working for and reporting to (i.e. manager, director, VP).

Yet many job descriptions don’t give this information.

For example, we looked at numerous job descriptions and only found a couple that tell you the name of the person you would work for.

It doesn’t have to be long description, just a sentence or 2 and a name for candidates to check/reference. Here’s one we found: 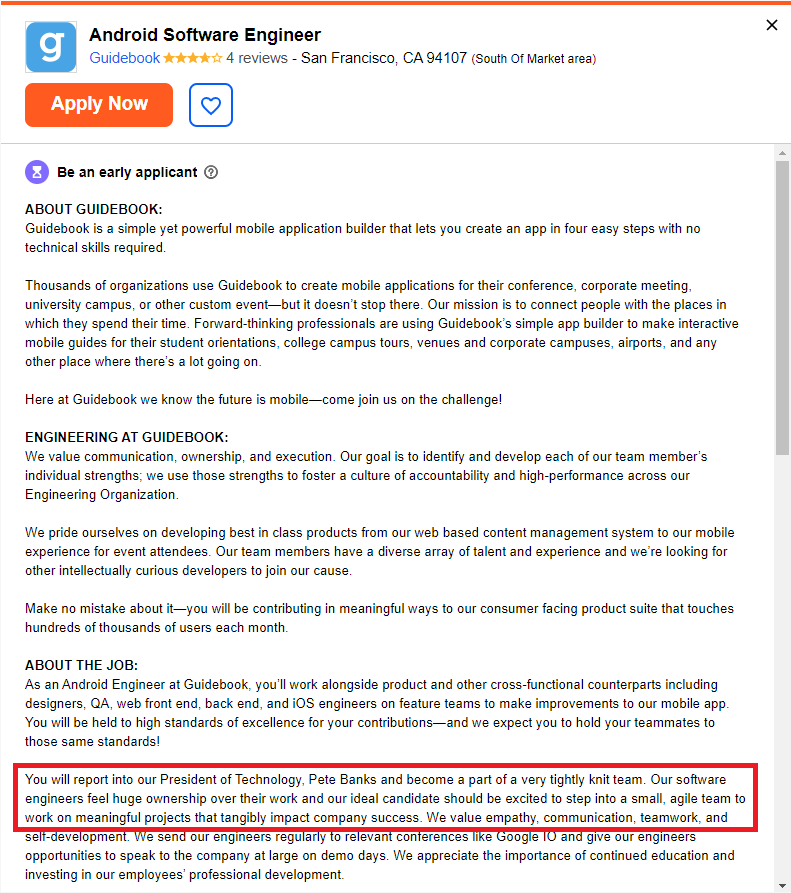 Transparency is becoming the name of the game.

When you want a $10 lunch, you can rely on Yelp to give you options,show you photos of the restaurant (and dishes!), and give you reviews of what others think.

Your job information should be the same.

Employers need to be more transparent about items such as:

Some call this power shift “pull”: as in, we are now pulling more information to us than relying on others to push it to us.

We now pull (stream) our shows and movies from Netflix, Hulu and Amazon; whereas 15 years ago we relied on big networks (CBS, NBC, ABC et all) and movie studios to push the programming to us.

In the world of information retrieval Quora is a great example of pull – you ask a question and get alerted (in your email) when there are answers.

Most job information is still pushed out through Craigslist, Monster, CareerBuilder and corporate jobs/career web pages.

The winning job information providers let candidates pull the relevant information to them based on data they have already shared (such as their job history or location or tags).

We see pictures and videos just about every time we evaluate a transaction online: whether it be when we’re at Amazon, Netflix, Apple.com, Yelp and especially when looking at a larger transaction (hotels, cars, homes, etc.).

We watch trailers/previews on Netflix before we watch.

Shouldn’t job opportunities be the same?

Shouldn’t you be able to see, hear and feel that job opportunity.

Especially when each job is a $1 Million transaction!

We think so. Here’s an example of a job description featuring video from an employee: 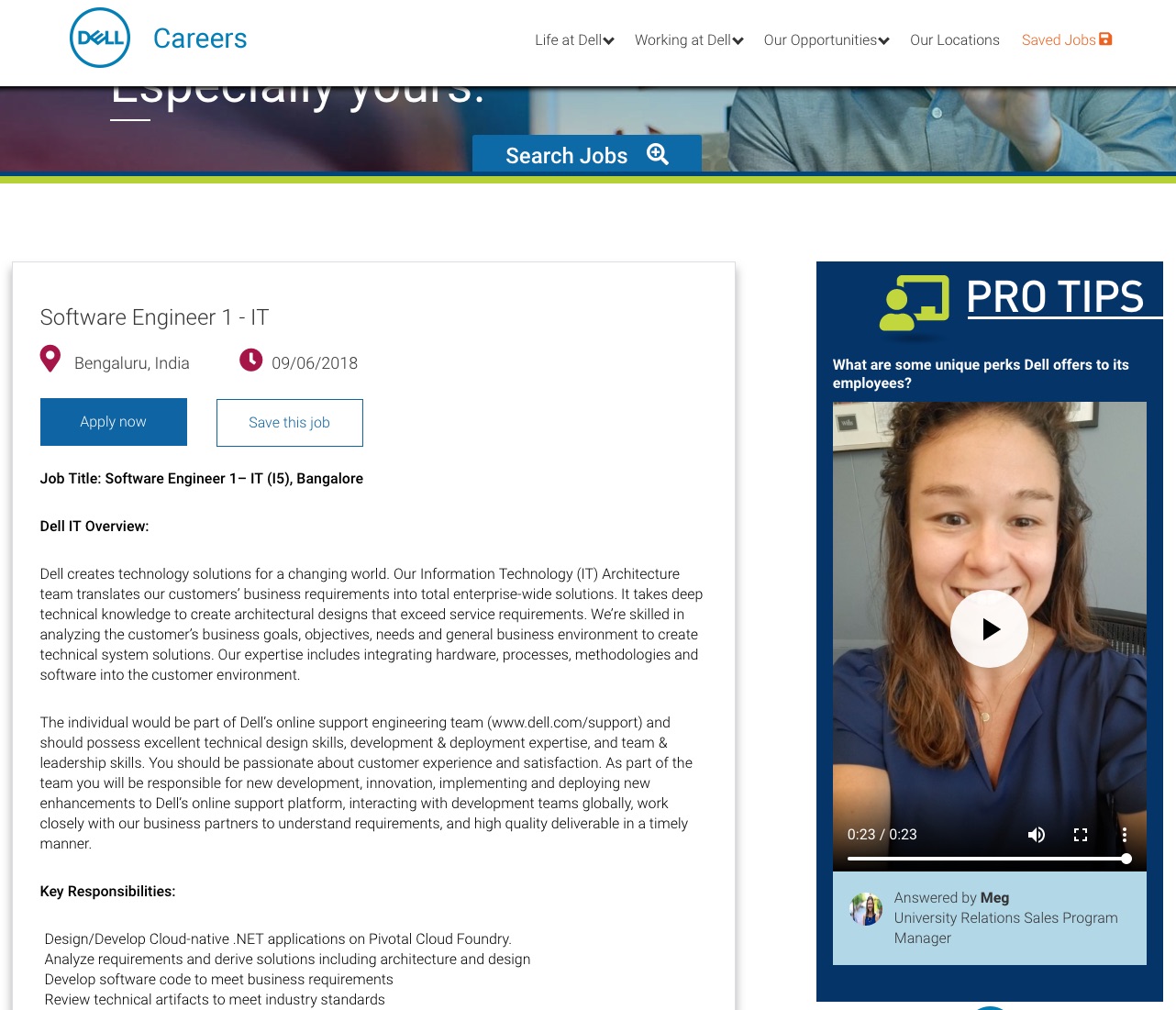 5) Give Life to Job Opportunities

According to Workable’s Recruiting KPIs article: The average technology job (IT, Engineering) in the US takes about  30 to 60 days to fill on average.

During those 30 to 60 days, much about the job changes.

For one thing, interested candidates start inquiring about the job (either by applying or perhaps asking questions).

Despite the fact that job opportunities are living/breathing things, most job postings are static – there is nothing that changes from day 1 of the job to day 60 when it gets filled.

Ways you can make your job postings more alive:

Referrals continue to be the most effective way for people to find jobs.

And when you cross a Facebook/Twitter/LinkedIn-type social network with job opportunities, you get “referrals on steroids.”

People trust their friends and colleagues over anyone – so where do you think they’ll go first for finding a job?

Will it be Facebook/Twitter/LinkedIn or some face-less list of job postings?

Our money is on the social media platforms.

7) Third-Party Recruiters Will Go The Way Of Other Middlemen

This brings us to third-party recruiters/staffing agencies, who often make 15-25% of a job candidate’s first year’s salary (paid by the employer) for recruiting candidates to a job.

The above changes to the world we mentioned — social graph, transparency, the shift from “push” to “pull” and other factors – will cause third-party recruiters to go the way of other middlemen such as travel agents and stock brokers.

Afterall, when is the last time you called your travel agent for a flight or your stock broker to invest in stock?

Don’t get us wrong, recruiters (especially the numerous excellent ones) aren’t going extinct any time soon.

But if you look at many of the jobs that recruiters advertise on like Monster and LinkedIn, you will see they often lack the following:

Will a quality job candidate be willing to jump through the hoops of talking by phone or via email with a recruiter when they have so little visibility/transparency into the job…especially when the employer could be a few clicks away?

And how about the employer?

Will Salesforce want to pay $20,000 to an outside recruiter for a $100,000 per year engineer when Salesforce can click a few buttons and get their army of employees and customers to market the job for them (for a few thousand bucks at most)?

We believe third-party recruiters will see their businesses rattled by the democratization of referral fees and recruiter commission fees.

So, who survives in the third-party recruiter world?

The many excellent, trusted third-party recruiters will continue to propser based on their reputation alone.

Third-party recruiters who specialize in high touch-point recruiting  (e.g. large business C-level hires) or team/project-hiring (e.g. if an entire IT security team needs to be hired to deal with a major security breach) will also still do well.

And those recruiters who can effectively navigate the social graph and other technologies will prosper.

And, of course, the Internet-based systems that automate referral/commission fees for hiring transactions will also thrive.

However, we believe a large number of third-party recruiters — the ones who aren’t the very, very best or niche specializers — are doomed for failure.

7 Responses to “The Top 7 Reasons Hiring Is Being Reinvented”