Racial bias in job descriptions can be unconscious, but it happens quite often.

“… a computer blacklist details known malicious or suspicious entities that shouldn’t be allowed access or running (execution) rights, in a system or network.”

Companies like Amazon and Twitter are replacing blacklist with words like “reject list” or “block list” to avoid racial bias, specifically against people of color. Another popular phrase is “brown bag session” or “brown bag lunch” which companies use to describe learning sessions in their job descriptions. But, the “Brown Paper Bag Test” has a history related to racism and colorism. 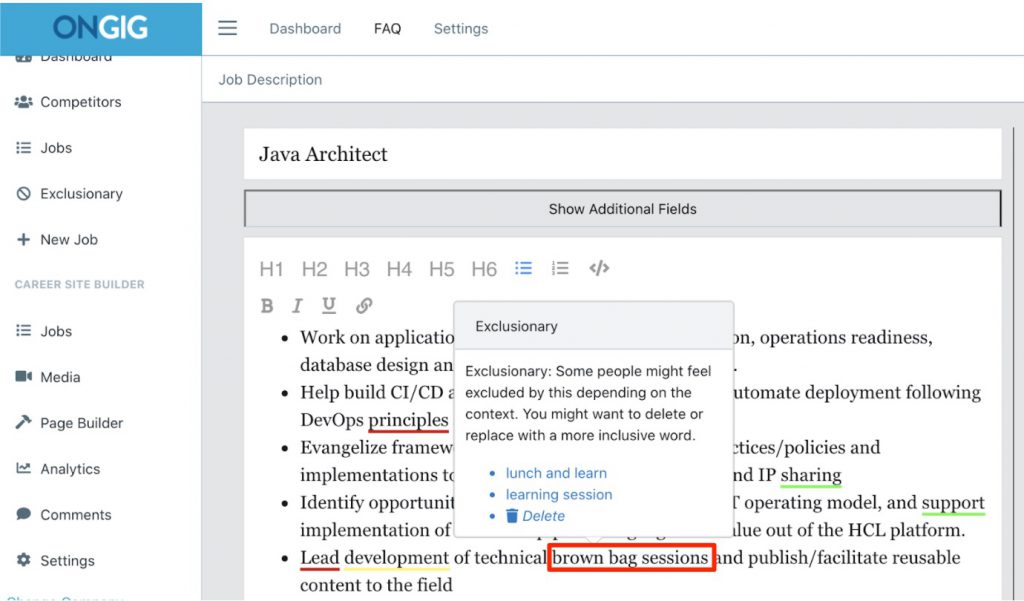 Similarly, “Cakewalk” is a racially-biased phrase that has been found in job descriptions. If something is referred to as a “cakewalk”, it is considered to be an easy task. This phrase contains hidden bias and according to NPR the cakewalk was:

2. Bias Against the Latin Community

As you can see in the image below, using the word “Latino” or “Latina” in a job description may make certain individuals feel excluded depending on the context.

The word Latino implies masculinity and the word “Latina” implies femininity. This is a form of hidden bias. 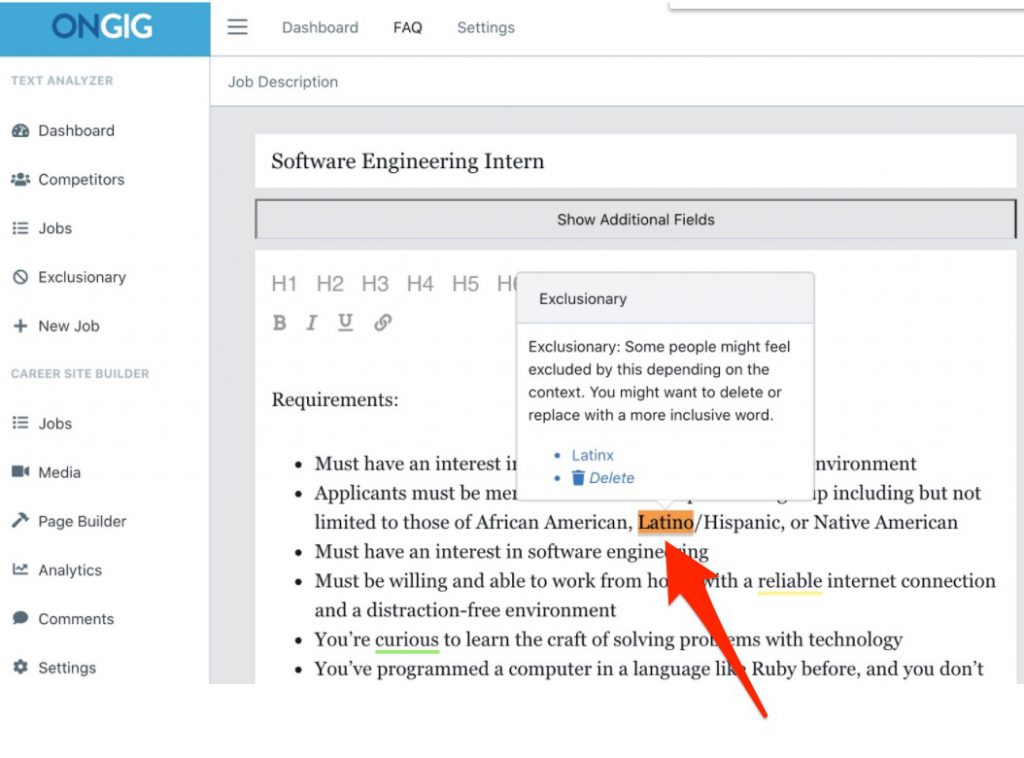 Other phrases to avoid that are biased towards the Latinx community are “spic” (short for Hispanic) or “wetback” (a racial slur against people from Mexico).

As we wrote about in this article about racist brands, Proctor & Gamble is retiring the name of its “Spic and Span” cleaning product due to the brand’s origins rooted in racial hatred of the Latin community.

Bias against Asian candidates in job descriptions is likely unconscious (or hidden bias), but using words like “Oriental” or “Orientals” is discouraged due to racial undertones.

Engineers at Amazon even added this phrase to their recently created internal Wiki which is geared towards removing various racist terms.

Another racist phrase that is biased against Asian candidates is “Long time no see”. This phrase dates back to an old Chinese phrase, and could be offensive to people of Asian descent and should be replaced by “it has been a while.”

All of these biased phrases are flagged as “exclusionary” and have alternative phrase suggestions in Ongig’s Text Analyzer tool.

4. Bias Against English as a Second Language Candidates

Being fluent in a language does not mean you have to be “native” to that country. Job descriptions that use “English Fluency Level: Native”, “Native English Speaker”, or “English Native Speaker” exclude a person who speaks English as a second language. A more inclusive option is “Fluent in English” or “Proficient in English” if you want to remove potential hidden bias. 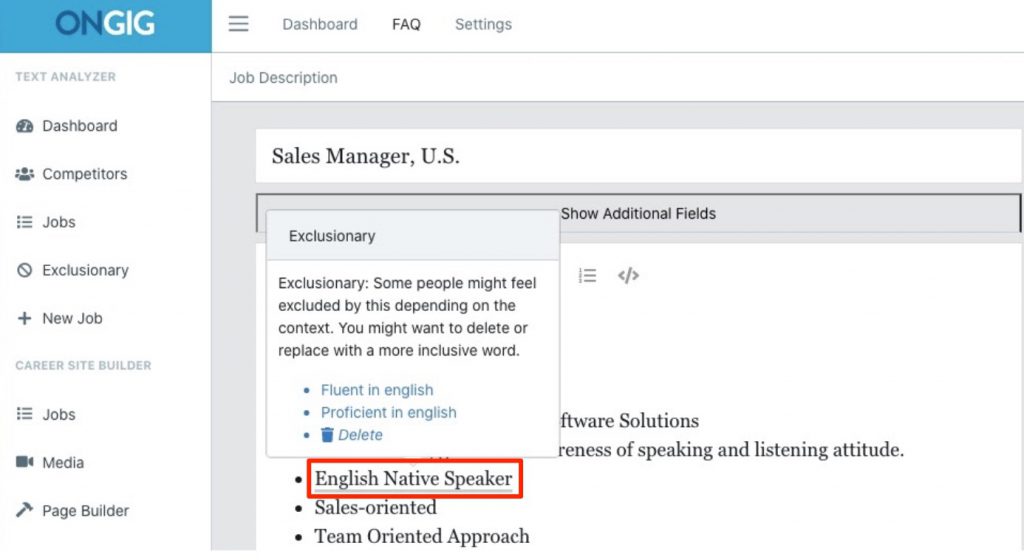 This also applies to languages other than English. For example, someone who is not born in Germany may still qualify as “Fluent in German”.

You will see in the job description below for an experienced painter, a job requirement is “No Illegals”, which is biased against immigrants. A more acceptable phrase would be “no undocumented immigrants”. 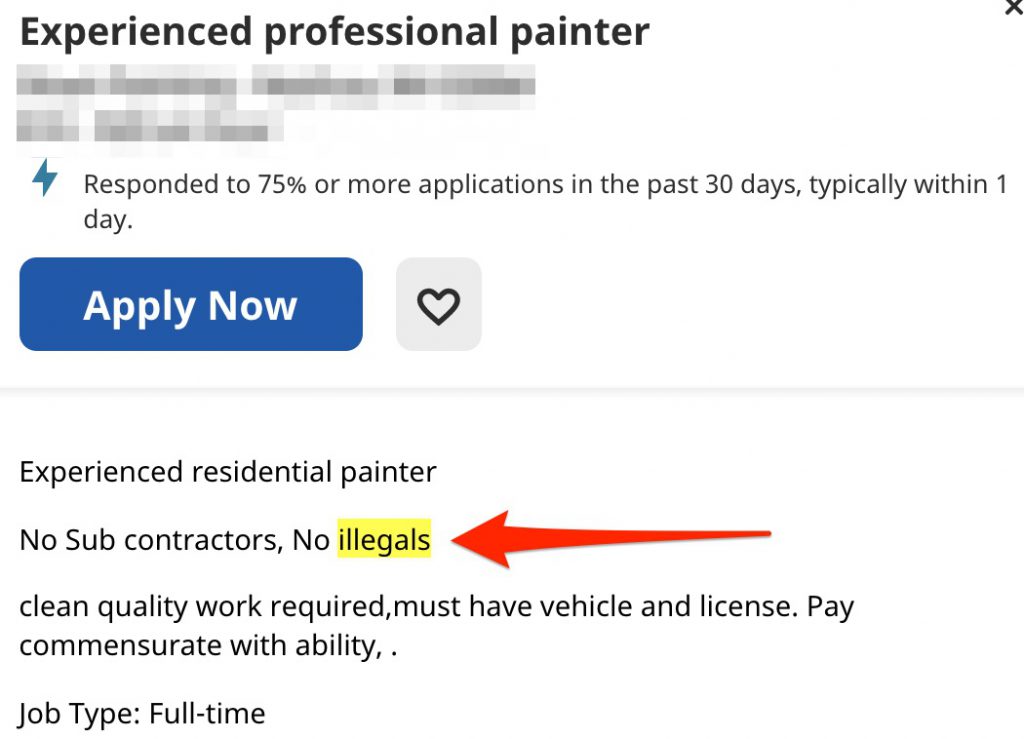 There are quite a few racially-biased phrases related to immigrants in job descriptions. Some examples:

To remove bias these phrases should be replaced with:

We also found racially biased phrases related to groups of people of Indigenous descent. The phrase in the job description below mentions having the “ability to sell ice to an Eskimo”, the word “Eskimo” has racial undertones and hidden bias so this phrase could be frowned upon by Indigenous groups. Removing this phrase or using “Inuit” when referring to “Eskimo people” is less offensive, and much more inclusive.

Another word with racial undertones is “Indian”. The more proper (and inclusive) phrase to use in the United States is “American Indian”. Other acceptable phrases are “American Indians” and “Native Americans”.

Affinity bias is when we have the tendency to gravitate towards someone who reminds us of ourselves. A commonly seen instance of affinity bias in job descriptions is the “Top School” requirement.

Companies are posting job descriptions that require candidates to have a degree from an “Ivy League University” or a “top engineering school” as seen in the job posting below from Indeed.

A career consultant from North Carolina, Latesha Byrd, was recently interviewed by the Charlotte Business Journal about the fight against systemic racism. Byrd said:

“We tend to warm up to people who look like us, who talk like us, who have a similar background to us, and that creates its own challenges…We are less likely to extend an offer to someone we don’t have a lot in common with…In a professional setting, this can create disparities from the get go, especially in deciding who gets hired or promoted. Removing bias in a process that automatically puts African Americans at a disadvantage if most managers and recruiters are white is crucial.”

Affinity bias is also commonly called “elite bias” and causes exclusion during the hiring process. Instead of asking candidates to have a degree from an elite university, requiring a degree in a specific field is much more inclusive. [See our article Elitism in Hiring: Who Needs Harvard? for more about elitism in hiring]

If you enjoyed this article, check out 5 Examples of Racial Bias in Hiring. It includes removing bias in candidate screening, interviews, background checks and job offers.

Ongig’s Text Analyzer software helps eliminate unconscious bias. It finds offensive/exclusionary words and gives you recommendations to replace them. We’d be happy to analyze your jobs to show you examples of unconscious bias. Wouldn’t you prefer to find bias before your candidates do!?

Thanks to these pros on racial bias:

Thanks to these useful resources for help in researching this article:

August 5, 2020 by Heather Barbour in Diversity and Inclusion