Job descriptions are full of bias toward POC (people of color). We found 10 terms that show up frequently despite being biased.

Before we look at the list, here is a people of color definition from Ongig’s Diversity & Inclusion Glossary:

“People of Color — People of Color, or Person of Color, is a phrase used in the United States to describe people who are not white and is meant to be inclusive of members of underrepresented groups, with emphasis on common experiences of racism.”

A more recently accepted people of color synonym is BIPOC, which stands for Black, Indigenous, People of Color. The terms we list below that have bias toward POC, also apply to BIPOC.

Note: Ongig’s Text Analyzer flags these and many more biased terms (with suggestions).

Now, here is the list of 10 terms and statements that are offensive to people of color (with real examples). I’ve included some background as to why:

The term “blacklists” might offend some people of color as it implies black is bad and white (e.g. “whitelists”) is good. In July, Twitter Engineering tweeted a company statement about moving away from using words like blacklisting in their coding language:

“inclusive language plays a critical role in fostering an environment where everyone belongs. At Twitter, the language we have been using in our code does not reflect our values as a company or represent the people we serve. We want to change that. #WordsMatter”

Below is an example of a live Director of Lifecycle Marketing on Indeed.com that still includes “blacklists”: 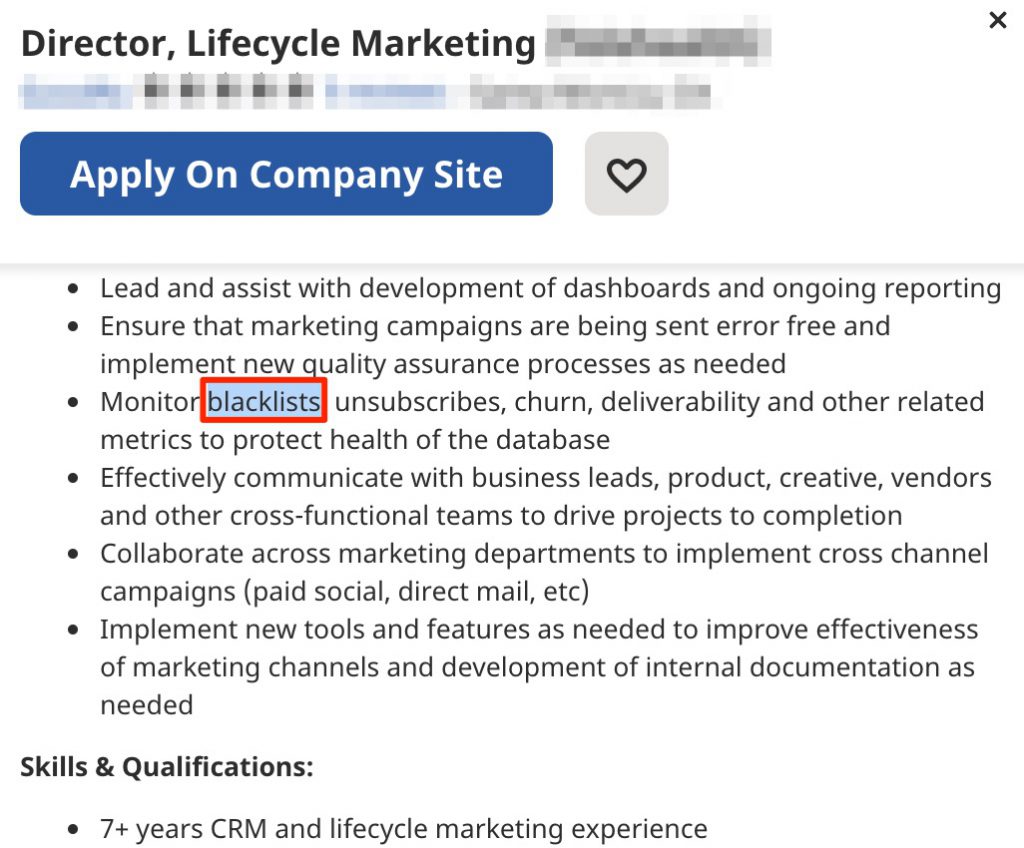 In July, we wrote a blog about the history of the brown paper bag test and how it is related to racial bias. You can see in the screenshot below from Ongig’s Text Analyzer that there are alternatives to using “brown bag sessions” in your job descriptions. Replacing “brown bag” with “lunch and learn” can remove potential bias toward POC.

Along with replacement words or synonyms, the Text Analyzer also gives background as to why the term might offend people of color or make them feel excluded. 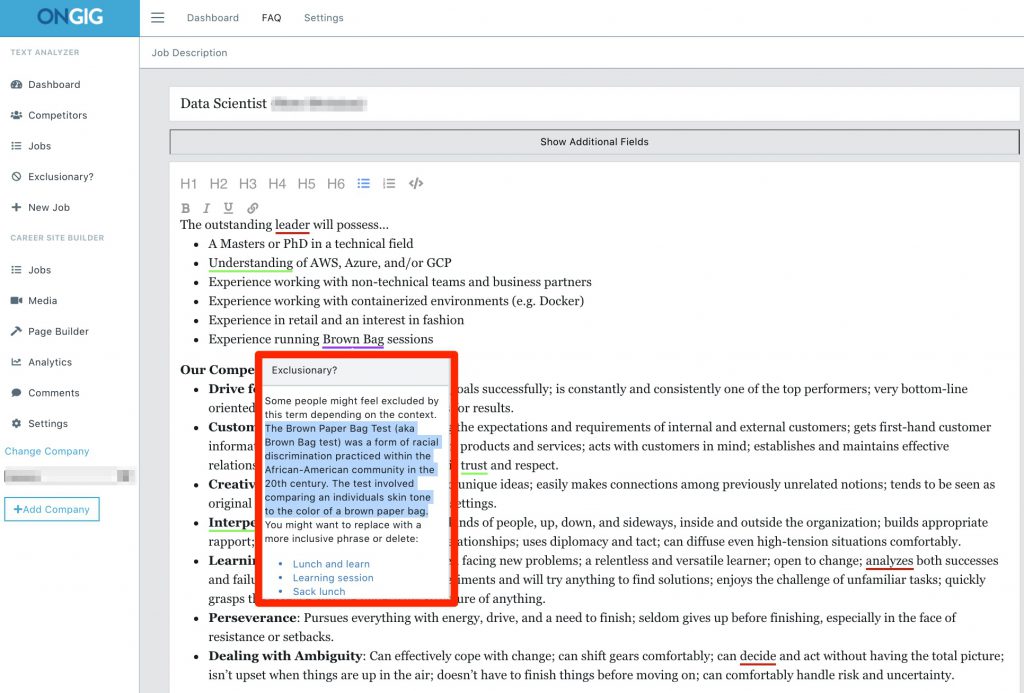 Another example of statements that are offensive to people of color is using the phrase something is a “cakewalk” in job descriptions. In July 2020, the Today Show published a list of 11 everyday words and phrases have racist and offensive backgrounds, and cakewalk is on the list.

Here is more background about the term cakewalk from NPR:

“The phrase “cakewalk” originated from a pre-U.S. Civil War dance performed by slaves for slave owners on plantation grounds. The dance was first known as the “prize walk”; the prize was an elaborately decorated cake. Hence, “prize walk” is the original source for the phrases “cakewalk” and “takes the cake”.”

The DevOps Engineer job description is from Linkedin.com and uses the term “cakewalk” when referring to the difficulty of lab automation. A more acceptable phrase would be “lab automation is no easy task though”. 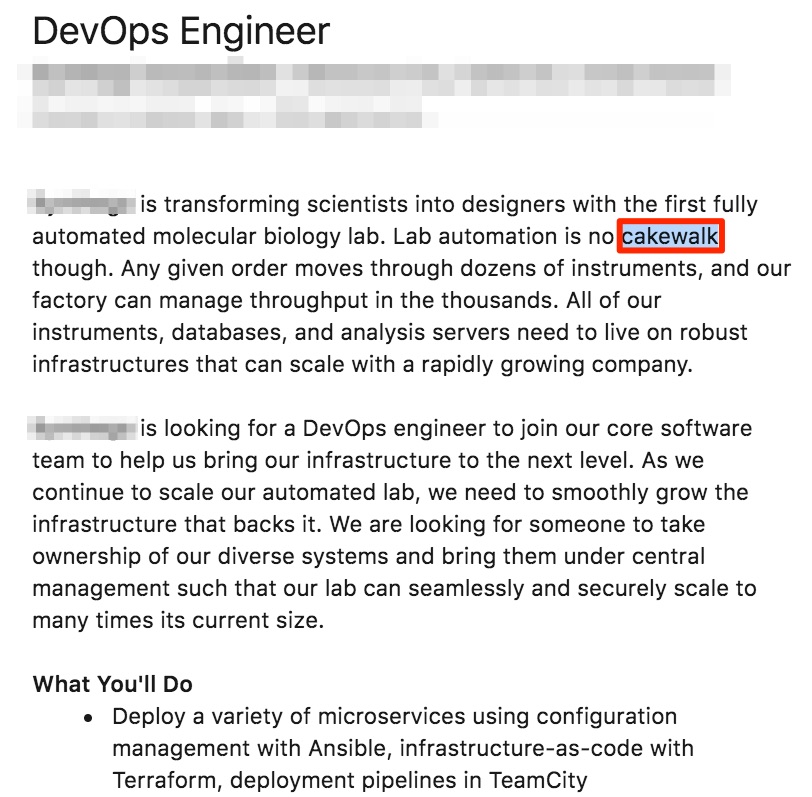 Many companies are moving away from using “culture fit” in job descriptions because of its bias toward POC. A blog on Medium says some companies:

“cling adamantly to the idea that candidates must somehow “fit the culture” of our team and company, and based on a lack of culture fit, many candidates are refused a job.”

You can see in the screenshot below from Text Analyzer, “culture add” is a more acceptable term that does not contain bias toward POC. Each team member is adding to the culture of an organization, instead of fitting into a certain mold. 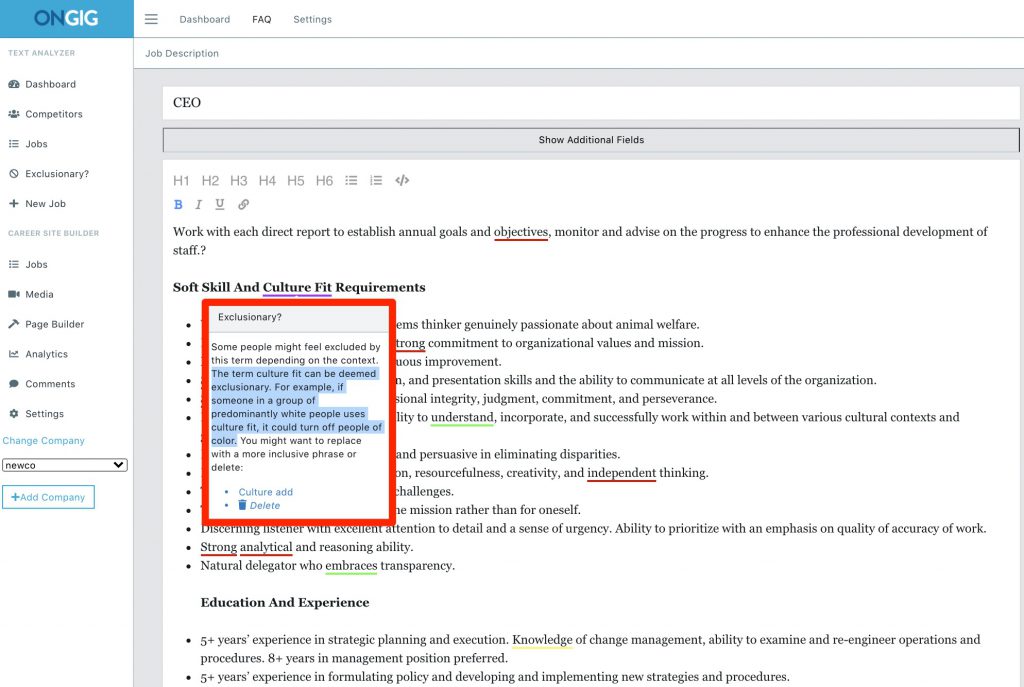 English native speaker is also on the list of statements that are offensive to people of color or people who speak English as a second language. Being fluent in a language does not mean you have to be “native” to that country. Using a phrase like “fluent in English” shown in the screenshot below can remove bias towards POC. 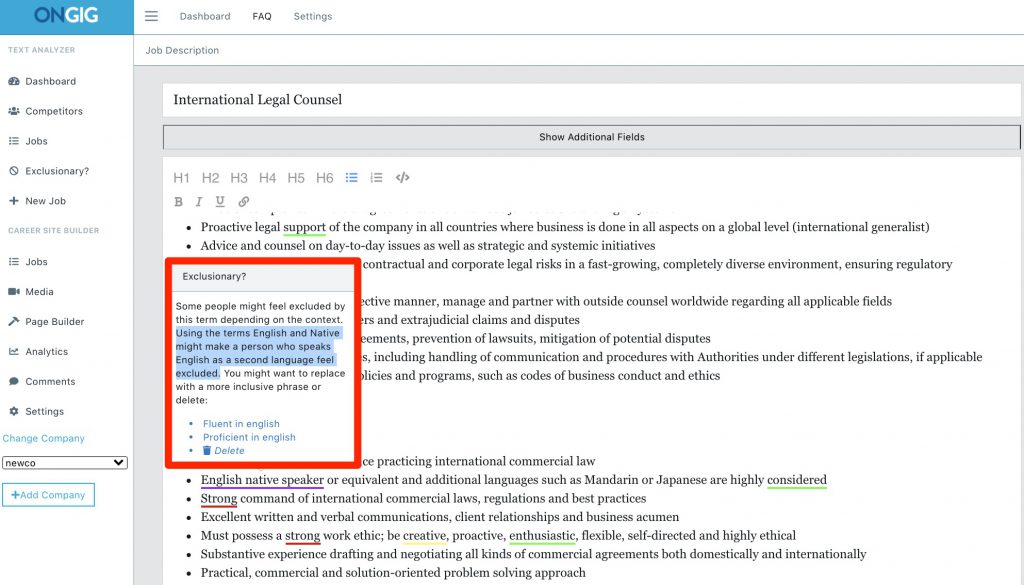 Terms such as “Grandfather Clause” or “grandfathered” are also discouraged for their racial undertones and bias toward POC. Encyclopedia Britannica says:

“Grandfather clause — statutory or constitutional device enacted by seven Southern states between 1895 and 1910 to deny suffrage to African Americans. It provided that those who had enjoyed the right to vote prior to 1866 or 1867, and their lineal descendants, would be exempt from recently enacted educational, property, or tax requirements for voting. Because the former slaves had not been granted the franchise until the adoption of the Fifteenth Amendment in 1870, those clauses worked effectively to exclude Black people from the vote but assured the franchise to many impoverished and illiterate whites.”

The job description pictured below from Linkedin.com shows a “grandfathered degree requirement” in the education requirements. A more acceptable term would be “exempt” or “exemption”. 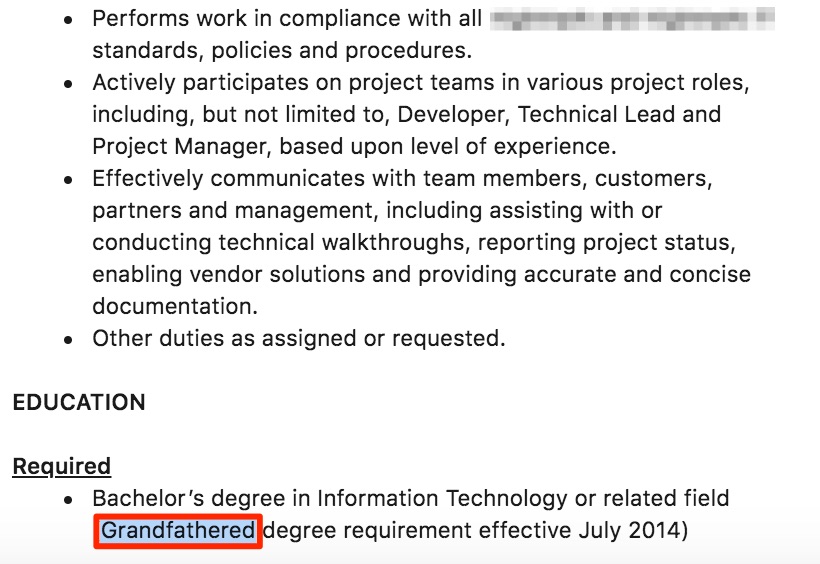 According to an article by Business Insider, Amazon engineers built an internal wiki page that suggests alternatives to unconsciously racist terms like ‘brown bags,’ ‘cake walk,’ and ‘master/slave’. The article says:

“Amazon engineers are collaborating on an internal Wiki page that shows how to replace unconsciously racist and gender-biased terms with more inclusive language.”

The phrase “illegal immigrants” also contains bias toward POC because of the negative undertones related to the word “illegal”. Synonyms to remove people of color or racial bias are shown below in Ongig’s Text Analyzer in a job description for an ICE Analyst: 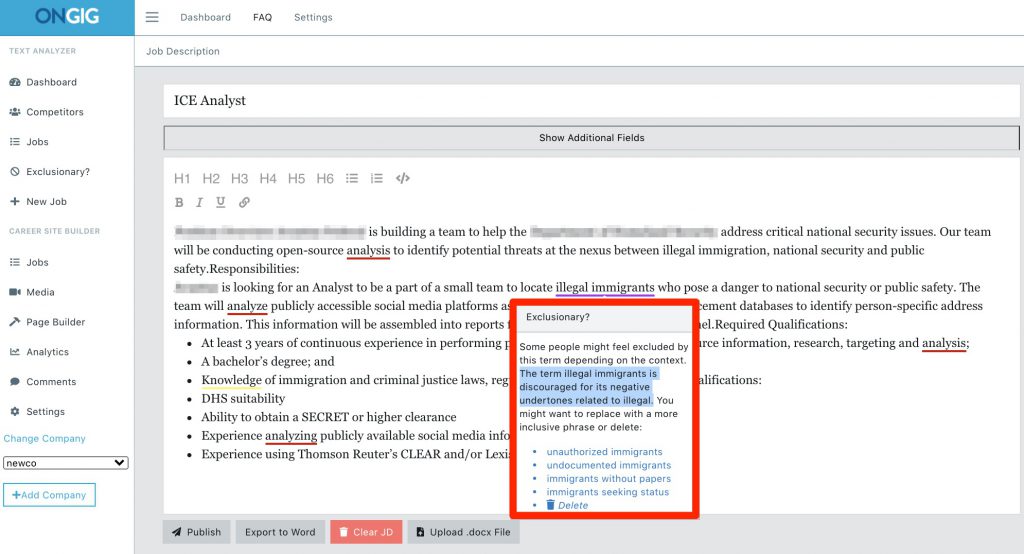 This journalist stylebook reference guide from Drop the I-Word provides more background and tips for using language about immigrants without offensive language or bias. 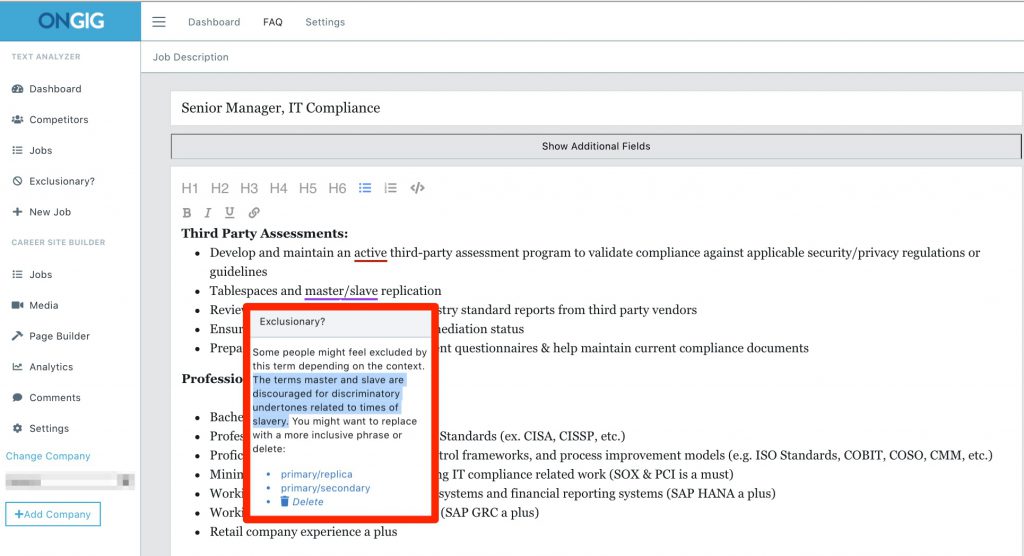 Using the term “non-white” might offend some people of color as it suggests an “us and them” world where there are white people and then everyone else. It should be removed from job descriptions like the one below: 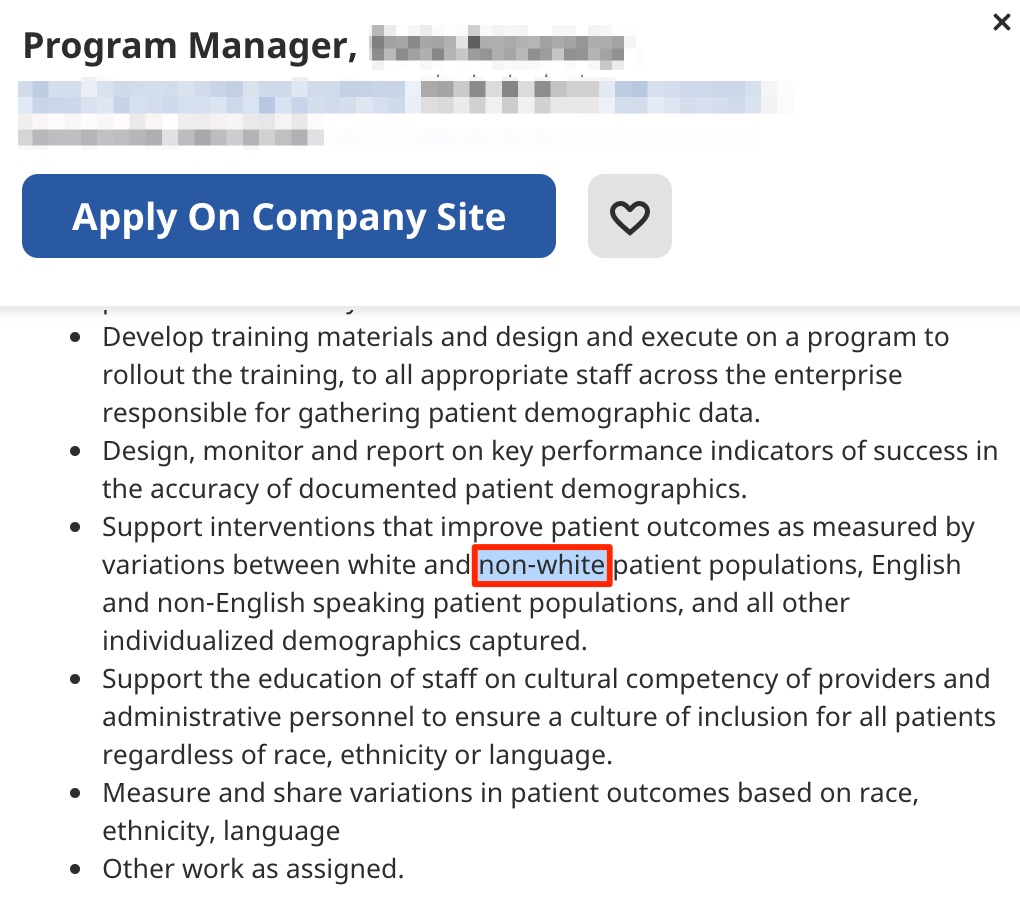 A guide to bias-free communications from the University of Wisconsin Madison says to:

“Avoid the term “non-white,” which sets up white culture as the standard by which all other cultures should be judged.”

More acceptable phrases are “members of underrepresented groups” or “members of minority groups”.

The job description below from Indeed.com shows an opening for a Preschool Teach Assistant at “Peanut Gallery”. The phrase “peanut gallery” is another example of statements that are offensive to people of color. 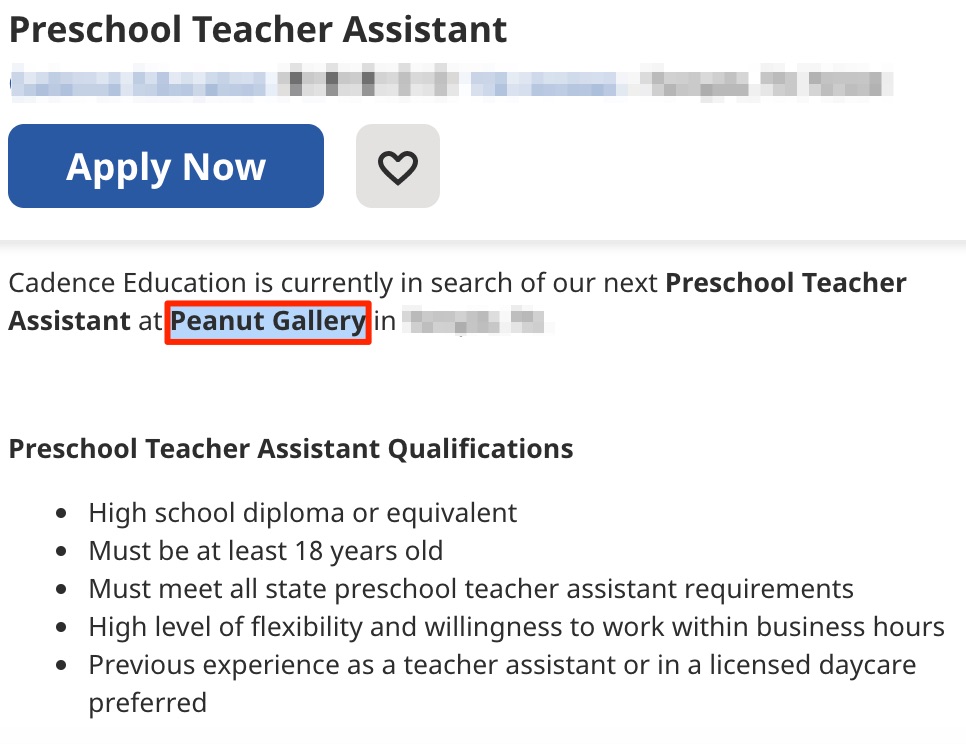 Business Insider’s article, 12 racist and offensive phrases that people still use all the time, says:

“the popular phrase “peanut gallery,” typically used to reference hecklers, originated as a term to refer to those — usually Black people — who sat in the “cheapest” section of the Vaudeville theaters.”

Should you use BAME, BME and people of colour in the UK?

Biased language varies from country to country. The “Writing about ethnicity” style guide, used by the UK government says the acronyms BAME (Black, Asian, and minority ethnic) and BME (black minority ethnic) should not be used. because:

“People of Colour” is also off-limits because it excludes “White minorities”.

Why I wrote this:

Ongig’s Text Analyzer software helps spot and eliminate racial bias in job descriptions. It finds offensive/exclusionary words and gives you recommendations to replace them. We’d be happy to analyze your jobs to see if you have examples of unconscious bias in your job descriptions. Wouldn’t you prefer to find bias before your candidates do!?

November 24, 2020 by Heather Barbour in Diversity and Inclusion