Google recently released a new ATS and when Google releases anything new, it’s worth a close look. Afterall, they arguably have the most software engineering horsepower of any company on the planet — and the cash reserves to keep at it.

Before we dive into why you should care about this new Google ATS, you might get a kick out of its name(s).

It’s still so early on for the new Google ATS that Google seems to be calling it by a few different names. I’ve seen:

None of those names has stuck with me, so I’m calling it “Google Hire” — it rolls off the tongue more smoothly and it’s what my favorite hr/recruiting nerd buddies call it.

Name clunkiness aside, Google Hire is a very serious new solution in the HR/recruiting world.

Initially, Google Hire is being targeted at the customers of Google’s own G-Suite solution for businesses. If you don’t know what G-Suite is, it’s the collection of Google products (Gmail, Google Calendar, Google Docs, Google Sheets, G-Drive, etc.) wrapped together for business. G-Suite is Google’s answer to Microsoft Office/Outlook.

What that means is that Google Hire will NOT yet be targeted at enterprises running Microsoft Outlook/Microsoft Office.

Ok, let’s talk about the 7 reasons I think you should care about Google Hire:

Google Hire has the potential to be a top 3 ATS within 5 years if they really go for it. Afterall, Greenhouse Software got to #5 in market share in just 5 years (see Ongig’s Top ATS Report for a ranking of all major ATS’s by market share).

How might Google Hire do it? For starters, they have what is one of the best list of leads around: the 3 million businesses using G-Suite (a list that grew by one million in just the last 2 years!). These G-Suite customers are mostly small and medium-sized businesses but they also include numerous large employers such as Whirlpool, HP and pwc.

These are the “Glengarry” leads.

If just .5% of G-Suite customers buy Google Hire, you’re talking about 15,000 Google Hire customers. That would make Google Hire the largest ATS provider by total paid customer accounts that I know of. Google Hire would be a $180 million a year business if you look at midrange cost of Google Hire ($12,000 per year).

Note: Check out our ATS Pricing article for more details on Google Hire’s pricing including that a ballpark estimate of its cost is $48 per user per year.

And Google could get even more aggressive. What if they did a wild promotion of Google Hire?

They’ve done it before.

Remember April 1, 2004, when they launched Gmail? They offered 1 gigabyte of storage — 100 times the storage capacity of Microsoft’s Hotmail or any other email.

What if Google offered Google Hire free to any of the 3 million G-Suite customers?

I expect G-Suite’s customer base to reach 5 million by 2022 so their Glengarry leads will keep growing.

Google Hire still has a long way to go — it was only the #41 ATS based on Ongig’s Top ATS Report.

But Google Hire, if aggressive, could vault to a Top 5 ATS quite quickly and higher up over time.

2. Tighter Integration = Easier to Use?

What stands out about Google Hire is that it has something that no other ATS company in the world has: millions of people already using the cornerstones of its software.

I’ll bet that Google Hire will be easier for recruiters to use than many other ATS’s because it’s tying together software applications (Gmail, Google Calendar et al) that many of them already use.

Sure, other ATS’s integrate with Gmail, Google Calendar et al but Google will always have an edge over other ATS’s in terms of pulling them all together.

One neat benefit of Google Hire is that your job postings will automatically be marked up in proper Schema.org HTML code that optimizes their visibility on Google.com. This will help you with SEO Recruitment.

Why should you care? It’s free traffic and most ATS’s suck at SEO. Email is the killer app for most of us — did you see that we spend an average of 4.1 hours a day checking work email?

For those recruiters who live in their Gmail, Google Hire has a massive advantage. It has something similar to a Chrome/Gmail extension in which the right-hand panel of your Gmail now has Google Hire integration in it (see screenshot below) .

This is significant because recruiters don’t have to leave Gmail to leverage Google Hire. Other ATS’s have integrations with email but since Google owns the candy shop (Gmail and G-Suite), you can expect that their integration to be among the most seamless.

For example, if you search Software Developer JavaScript Bay Area within Google Hire, you will find matches that contain terms similar to JavaScript such as “node.js” and “jQuery”.

Google Hire also leverages Google.com’s search index by adding resume-type information (see below) to a candidate profile such as:

6. Calendar & Scheduling is a Bit Simpler

Google Hire also integrates with Google Calendar so that recruiters and hiring managers can easily schedule interviews. Again, if you are a G-Suite customer then it’s likely that nearly 100% of your employees are on Google Calendar.

That means that it’s easy for the recruiting team to interact with hiring managers or any team member that needs to take part in the interview meetings. We all know that it’s often hard to get hiring managers and other non-recruiting employees to use an ATS or recruiting software.

Google Hire should be easier for non-recruiters to adopt. 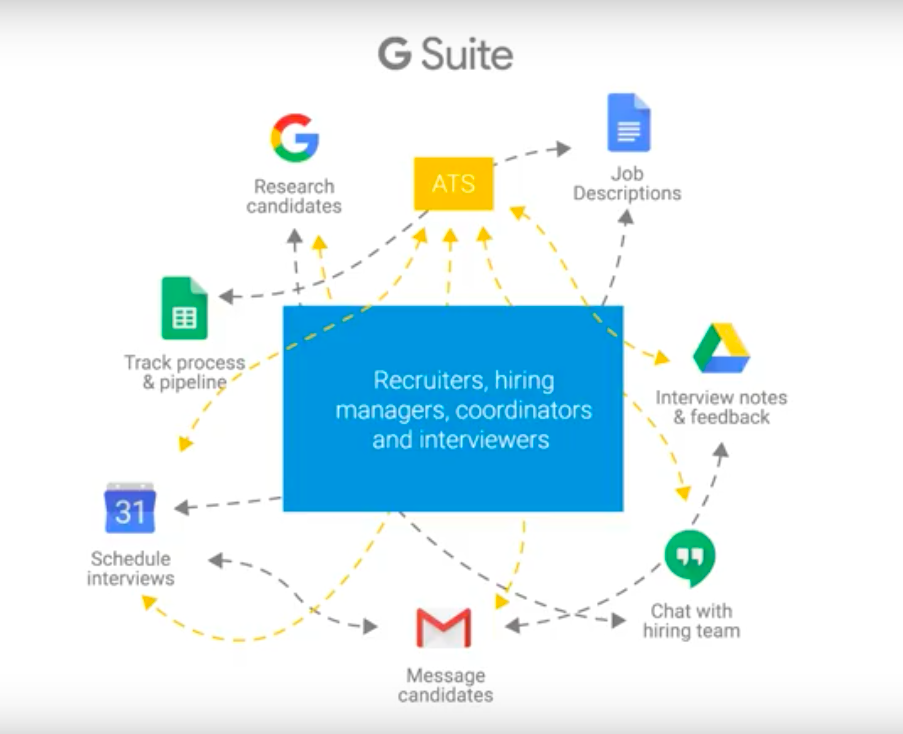 If Google really goes for it with Google Hire, there’s a ton of additional impact they can have on ATS features such as:

They could integrate their Google Hangout as a video interviewing option (they already have “Video interview” in their drop down of Google Hire’s Calendar/Scheduling section (see below) — why not just make it Hangout). They could use G-Chat to allow live chatting between recruiters/hiring managers and candidates.

So, there you have it.

I am by no means predicting that Google Hire will become a dominant ATS. But if Google leverages its Glengarry leads and pours resources into it, it will likely become a major contender in a short amount of time. And they have the resources to stick with this for a VERY long time.

Why I wrote this article: I study applicant tracking systems closely because Ongig partners with all the major ATS’s as part of our mission to transform job pages to boost quality candidate applications including diversity! In short, I get paid to know this stuff. 😉