Many companies are focusing on minority groups as a part of their diversity initiatives. In this article, we created a list of minority groups and included their % of the U.S. population [if we could find it] using census data. This article will use the term “underrepresented” and “minority” interchangeably. However, there is a trend away from the phrase “minority” because some people take offense to the “minor” part of “minority”. For this article we are using it more in the statistical sense.

What is a minority?

How do you define minority group? Minority groups describe racially, ethnically, or culturally distinct groups that are not in a larger majority group. Wikipedia says:

“In the United States, for example, non-Hispanic Whites constitute the majority (63.4%) and all other racial and ethnic groups (Mexican, African Americans, Asian Americans, American Indian, and Native Hawaiians) are classified as “minorities”.”

What is an underrepresented group? 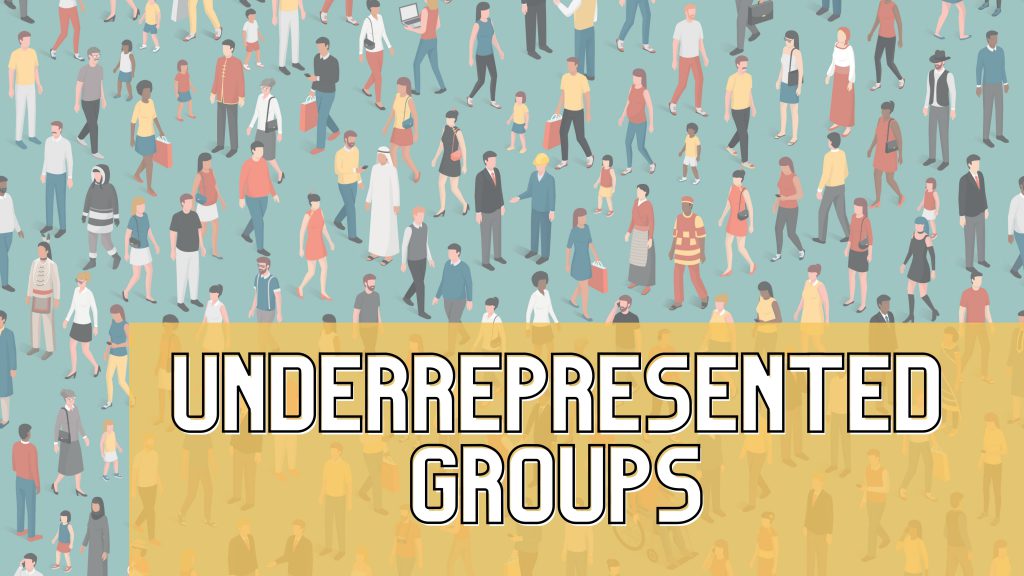 Now let’s have a look at the examples of minority groups. If you want deeper definitions of some of these minority group terms, they are listed in The Diversity & Inclusion Glossary [a List of 200+ Terms].

The NY Times reported in 2019, that this underrepresented ethnic group:

Traditionally, the Hispanic and Latino community is also one of the most underrepresented groups in business, especially in the science and engineering field.

According to Minority Rights Group International, the Hispanic/Latino population is on the rise. But so is the name of this underrepresented group.

“Each of these communities favours nationally specific names over any general term, but ‘Latino’ has emerged as the most popular alternative to ‘Hispanics’, which has long been favoured by government agencies and is used interchangeably with ‘Latinos’.”

Latinx is another term that has gained popularity. What is Latinx? Latinx is a gender-neutral term used to replace Latino or Latina when referring to a person of Latin-American descent.

This group represents 13.5% of the U.S. population. A positive for this underrepresented group is that foreign-born persons with higher-level degrees are starting to make up a larger percentage of the U.S. workforce, according to the National Science Foundation. The image below shows the distribution of foreign-born individuals in various career fields. 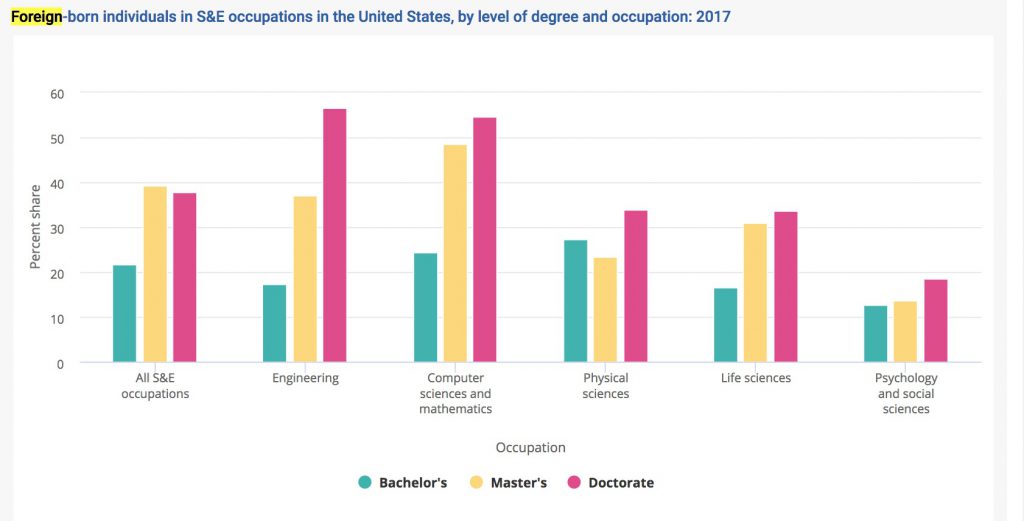 Black means to be related to people who have ethnic origins in Africa, or not of white European descent. Black is often used interchangeably with African American in the United States.

Another, more recent term being used to describe the Black/African American minority ethnic groups is BIPOC. What does BIPOC mean? The BIPOC acronym stands for Black, Indigenous, People of Color.

The Black Lives Matter movement has shined a spotlight on this underrepresented community causing many companies to change their diversity goals and recruiting strategies.

Asians make up 5.9% of the U.S. population and are often called Asian Americans. Asian-American is a term that means to have origins in Asia or the Indian subcontinent. Asian-American includes people who live in the United States and indicate their race as:

“Asians appear disproportionately underrepresented in leadership positions across different industries in the United States. This phenomenon is known as the “bamboo ceiling,” as bamboo “has always played an important economic and cultural role across Asia,” with the world’s largest bamboo areas in South Asia and East Asia. In US law firms, 11% of associates are Asian, whereas only 3% of partners are Asian. Even in the tech industry, where Asians are the ethnic group most likely to be hired (over 30% of the workforce), they are the least likely to be promoted to senior leadership positions (less than 15% of executives)”

Chinese minority groups make up the largest subsection of the Asian minority group in the U.S. A study from researchers at MIT, the University of Michigan, and Columb is Business School studied the bamboo ceiling mentioned above. Their findings:

Only 2.8% of people who participated in the 2019 census chose “2 or more races” when asked to select their race. Someone with two or more races is considered “mixed race”. Mixed Race means a person who has parents that belong to different types of minority groups, races, or ethnic groups. Biracial is another term for mixed race.

This underrepresented group, much like Foreign-born persons, may include other underrepresented communities that are listed in this blog. For example, someone who identifies with 2 or more races, can also identify as a woman of color, a veteran, a person with a disability, or other minority groups.

The American Indians and Alaska Natives are also underrepresented cultures. The Leadership Conference on Civil Human Rights recently reported that:

“American Indians and Alaska Natives (AIAN or Native peoples) have been undercounted for decades and roughly one quarter (26 percent) of Natives currently live in hard-to-count Census tracts.”

Being “hard to count” has a negative effect on underrepresented groups because they will have:

What is the difference between American Indian and Alaska native?

Alaska Native is a term for the indigenous people of Alaska. Alaska Natives consist of over 200 federally recognized tribes who speak 20 different languages.

Arab and other Middle Eastern American (.5%)

Arab and other Middle Eastern Americans have long been underrepresented communities. These groups share common U.S. cultures, faiths, and languages so they do not always consider themselves as underrepresented. But, they have been targets of bias and discrimination for many years.

Companies like Intel are creating Employee Resource Groups (ERGs) to help tackle the bias against this underrepresented group and others. Intel has 30+ ERGs, including the Arab Intel Community. These groups are organized to “provide an environment where employees from diverse backgrounds are valued, respected, challenged, acknowledged, and rewarded so they can achieve their potential and fulfill their career aspirations.”

Native Hawaiian and other Pacific Islander (.2%)

Similar to American Indians and Alaska Natives, Native Hawaiians and other Pacific Islanders are highly underrepresented communities. The COVID-19 pandemic has shined a brighter light on this issue. These minority groups are not being accurately counted in the U.S. Census, so in turn, they are at risk for not receiving public funding and the resources they need.

Other statistics related to these historically underrepresented groups (from the University of Hawaiʻi at Mānoa) are:

There are a few other types of minority groups (outside the examples of minority ethnic groups above) that are important to note. Employers are often trying to recruit these groups because they are underrepresented at their company.

Veterans are an underrepresented group in the U.S. population and in the workplace. Forbes published an article in April 2020 about Dispelling Myths About Military Veterans In The Civilian Workforce. Just like other minority groups, there are some common misconceptions around hiring veterans. According to Forbes, they are:

“Historically, only a small percentage of veterans have gone on to study at any college or university, much less one of our elite institutions.”

Military.com gives companies strategies for adding Veterans to their diverse workforce in their article Five Things to Help Recruit Veterans to Your Business.

Persons with disabilities are considered to be an underrepresented community because they make up just 8.6% of the U.S. population. Disability is a term used to describe people who have a mental or physical impairment which has a long-term effect on their ability to carry out day-to-day activities.

“Disabilities do not necessarily limit a person’s ability to participate in educational experiences or to be productive in an occupation. Persons with disabilities may or may not require special accommodation to enable them to succeed in school or at work.”

The same study includes the chart below, showing the various disability types and the percentage of the population who indicated they had a disability. 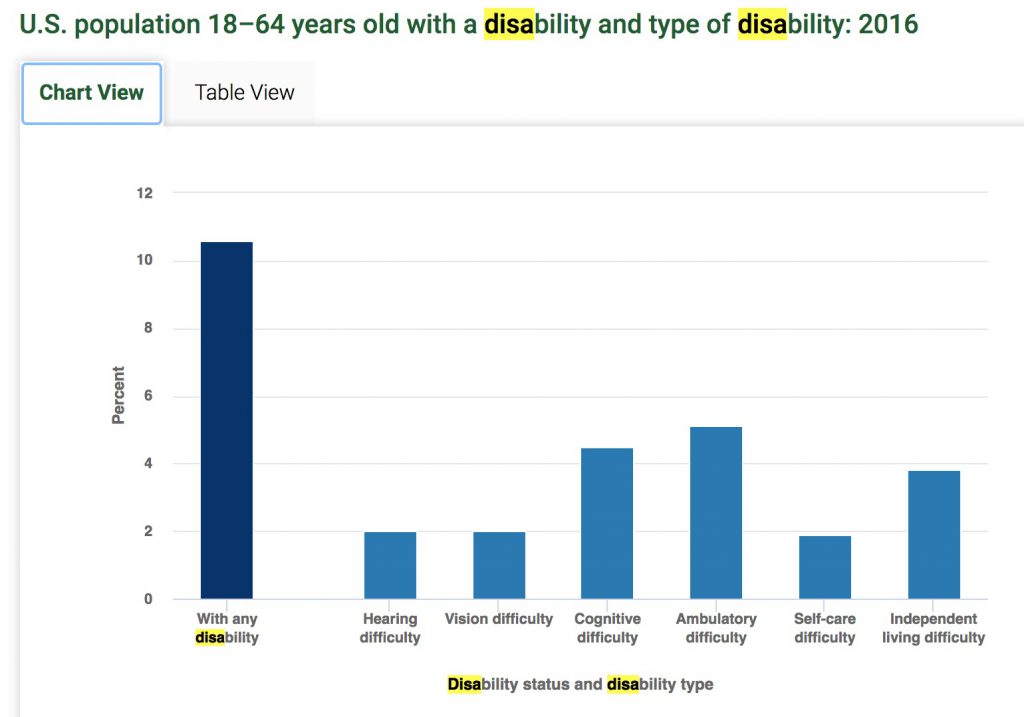 Neurodiversity is considered by some to be a cognitive disability or mental impairment. Neurodiversity is a relatively new term coined in 1998 by autistic, Australian sociologist Judy Singer in 1998. The neurodiversity definition began as a way to describe people on the Autistic spectrum. Neurodiversity has since broadened to include people with:

Women may make up 50.8% of the U.S. population, but still are underrepresented in the workplace.

A study focused on women’s empowerment (called Women in the Workplace 2019) shows signs of improvement, but CNET reports:

This chart from the Women in the Workplace report shows the gap between women and men in entry-level positions up to C-Level (e.g. for every 10 C-Suite roles, there are only 3 women in the same role).

Other jobs that have low female representation (according to Insider.com) are:

In 2018 in the state of California, the “Women on Boards (Senate Bill 826)” was signed into law to advance equitable gender representation on California corporate boards.

“In 2019, women of color represented 18% of entry-level positions. Few advanced to leadership positions: managers (12%), senior managers/directors (9%), VPs (7%), SVPs (5%), and C-suite positions 4%). In 2019, Black and Hispanic women made up a smaller percentage of total women employed in management, business, and financial operations occupations than white or Asian women.”

Also in the report, the percentage of women of color among US employees in 2019:

Hiring women of color and other underrepresented groups is a growing trend in top companies focused on DEI. So ideally these percentages will increase.

Yes. The LGBTQ community is a historically underrepresented group. What is LGBT?

LGBT — Abbreviation for lesbian, gay, bisexual, and transgender (often used to encompass sexual preference and gender identities that do not correspond to heterosexual norms).

LGBT is an acronym with multiple variations such as:

This minority group faces challenges in society and in the workplace. IMD’s article on Thrive as an LGBT+ executive or ally speaks to the experience of the LGBTQ community at work. The article says:

“Hostility in the workplace can be even stronger for minorities within minorities, who often suffer from “double discrimination,” e.g., LGBT+ individuals of color, as well as lesbian and transgender workers.”

There are even some countries where consensual same-sex activity is still criminalized.

Netflix is a leader in diversity, especially when it comes to the LGBTQ community. Their YouTube video “Netflix Employees Celebrating Pride” has a powerful message about diversity and inclusion.

Many companies are using some version of “underrepresented groups” in their diversity goals. The 5 companies below are no exception:

September 11, 2020 by Heather Barbour in Diversity and Inclusion