Some of you need to have affirmative action plans, according to the Executive Order 11246 Title 41 Affirmative Action Requirements.

The 5 samples of AA statements below are culled from a combination of corporate, non-profit and academic organizations.

The Company reaffirms its belief and commitment in equal employment opportunity for all employees and applicants for employment in all terms and conditions of employment.

The Company has developed and maintained a written Affirmative Action Program (AAP). The company’s Chief Executive Officer supports the affirmative action program and urges each employee to commit to carrying out the intent of this policy. The Company maintains an audit and reporting system to determine overall compliance with its equal employment opportunity mandates. The EEO Administrator oversees the affirmative action plan development, modification, implementation, effectiveness, reporting requirements and conducts management updates. The Company invites any employee to review the Company’s written Affirmative Action Plan. This plan is available for inspection upon request during normal business hours at the Human Resources office.

As part of the Company’s commitment to this overall process, it will seek to ensure that all aspects of employment, including recruitment, selection, job assignment, training, compensation, benefits, discipline, promotion, transfer, layoff and termination processes remain free of illegal discrimination based upon race, color, religion, sex and national origin, disability (as defined under Section 503 of the Rehabilitation Act of 1973) or protected veteran status (as defined under Vietnam Era Veterans’ Readjustment Assistance Act of 1974). Company ensures that all employment decisions are based only on valid job requirements. Regular review helps to ensure compliance with this policy.

The Company will ensure that employees and applicants shall not be subjected to harassment due to their status described above, or any harassment, intimidation, threats, coercion or discrimination because they have engaged in or may engage in any of the following activities: (I) filing a complaint with the Company or with federal, state, or local agencies regarding status covered under this AAP, (2) assisting or participating in any investigation, compliance review, hearing, or any other activity related to the administration of any federal, state, or local equal employment opportunity or affirmative action statute pertaining to the status covered under this AAP; (3) opposing any act or practice made unlawful by section 503 and/or VEVRAA, and (4) exercising any other right protected by section 503 and/or VEVRAA or its implementing regulations in this part. 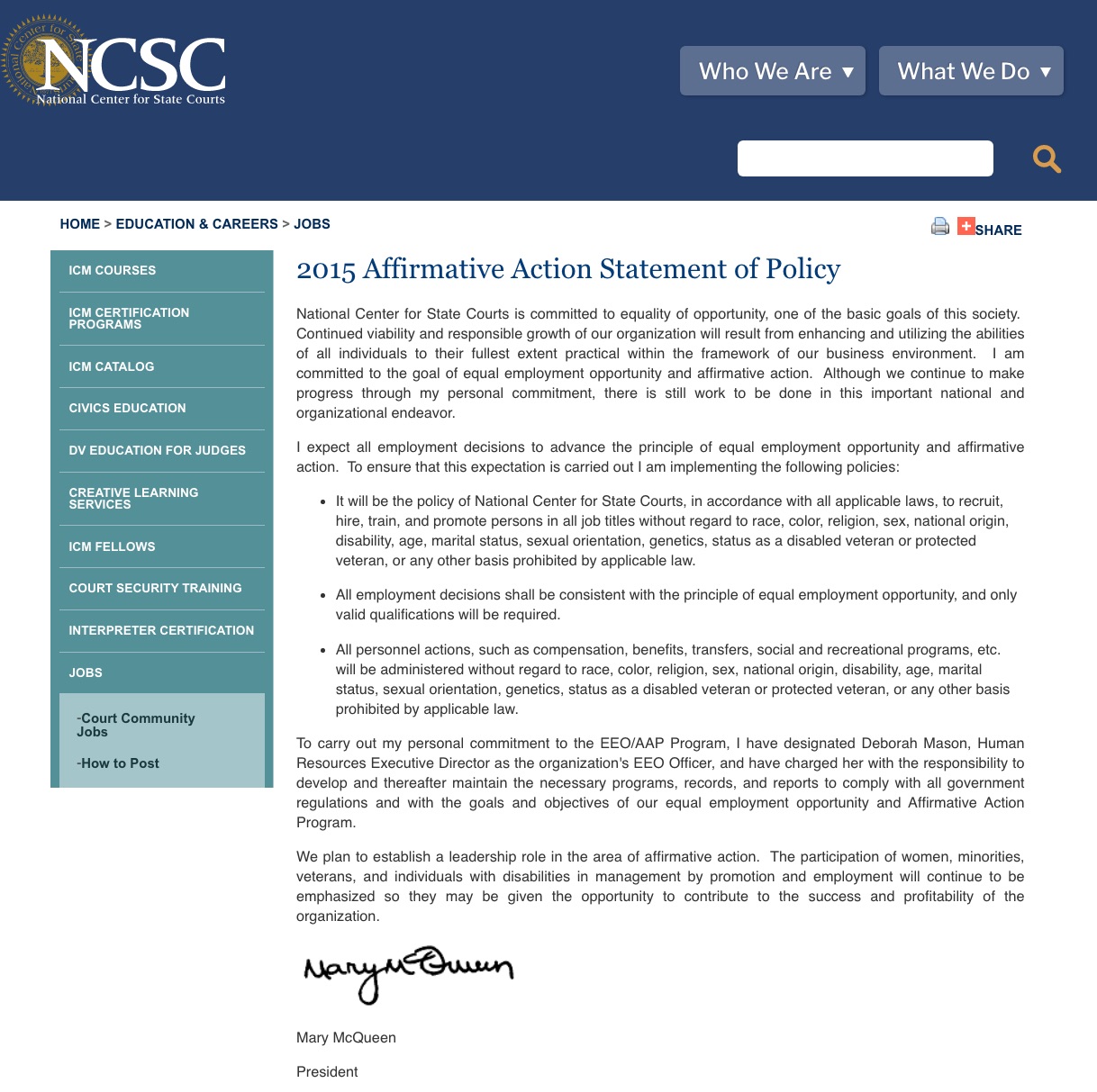 One of City of Hope’s major objectives is to represent good citizenship and to maintain a reputation for high standards of business. Employees are our most important resource and the basis for our success. We seek an environment characterized by respect for the individual where cultural and ethnic diversity are blended by teamwork into a harmonious work force.

The company continues to be committed to equal employment opportunity to ensure the rights of each person in all Human Resources Department actions, including recruitment, selection, training, compensation, promotion, and recreation, all of which shall be based upon individual ability, interests and performance. This policy has my complete support.

Therefore, all persons shall enjoy the benefits of decisions which are free of discrimination or harassment on the grounds of race, religious creed, color, national origin, ancestry, medical condition, marital status, gender, age, protected veteran status, sexual orientation, or status as an individual with a disability.

The overall responsibility for Affirmative Action Programs rests with me. Kety Duron, the Chief Human Resources and Diversity Officer is responsible for coordination of Affirmative Action Programs. While managers and supervisors are responsible for maintaining a discrimination-free work environment, employees share the responsibility for mutual understanding and a spirit of cooperation.

A copy of the company’s Affirmative Action Plan may be reviewed during normal business hours in the Human Resources Department.

The University of Memphis outlines 4 options for affirmative action statements its team can use:

Affirmative Action Statements
It is University policy to accurately portray our diversity in publications, Web sites, etc. Stereotyping individuals either in pictures or words is unacceptable.

The University has four affirmative action statements that are to be used as follows:

The University of Memphis does not discriminate against students, employees or applicants for admission or employment on the basis of race, color, religion, creed, national origin, sex, sexual orientation, gender identity/expression, disability, age, status as a protected veteran, genetic information or any other legally protected class with respect to all employment, programs and activities sponsored by the University of Memphis. The following position has been designated to handle inquiries regarding non-discrimination and anti-harassment policies: Director for Institutional Equity/Title VI Coordinator, oie@memphis.edu, 156 Administration Building, 901.678.2713. The University of Memphis policy on nondiscrimination can be found at https://memphis.policytech.com/dotNet/documents/?docid=430.

B: Must appear on all other publications, newsletters and forms produced for off-campus distribution, as well as on major university Web sites.

The University of Memphis is an Equal Opportunity/Affirmative Action University. It is committed to the education of a non-racially identifiable student body.

C: Must appear on all letterhead stationery, internal forms, electronic forms and memoranda, purchased advertisements in newspapers, journals, etc., and in other instances where space does not allow for Statement B.

D: Must appear in faculty employment opening announcements, flyers and non-purchased advertisements mailed or electronically sent off-campus. The statement should be set in 6- or 7-point type and centered on the back panel or back cover of each publication or at the bottom center of advertisements, flyers, etc.

The University of Memphis is an Equal Opportunity/Affirmative Action employer. We urge all qualified applicants to apply for this position. Appointment will be based on qualifications as they relate to position requirements without regard to race, color, national origin, religion, sex, age, creed, sexual orientation, gender identity/expression, genetic information, disability, veteran status or any other legally protected class.

Lenovo combines an AAP/EEO Statement on its EEO/AA Policy page. 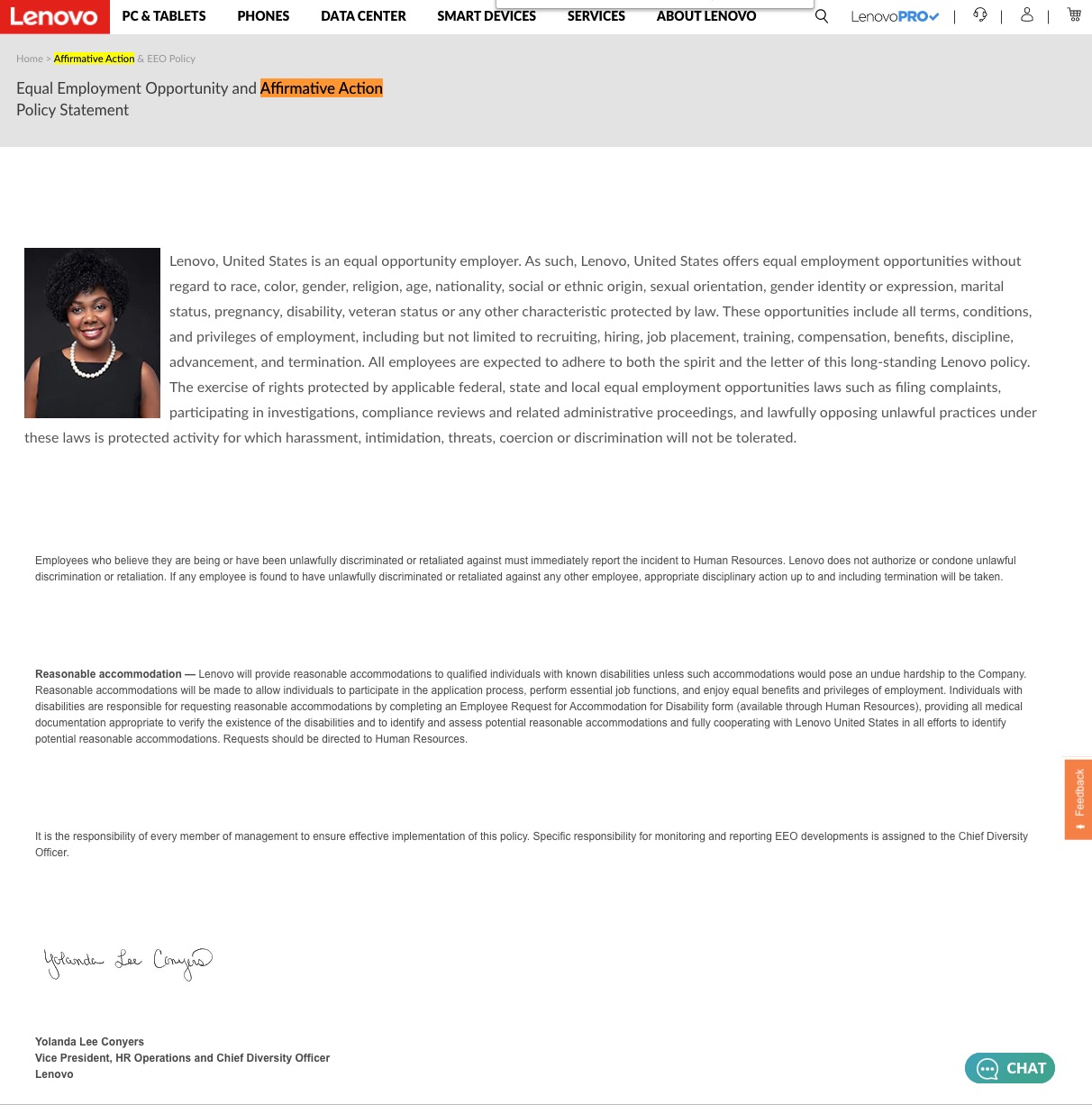 Our team here at Ongig is on a mission to transform your job descriptions to be inclusive and attract top talent. We also help to keep you out of lawsuits and bad press. Please check out our Text Analyzer software and ask for a demo if you’d like to learn more. Our software is pretty magical.

October 8, 2019 by Rob Kelly in Diversity and Inclusion