Believe me? That’s the math for the top hire at an average S&P 500 company (and makes Facebook’s hacquisition value of $500K to $1 million per engineer look downright cheap!).

Let me explain the math behind the $30 million claim: 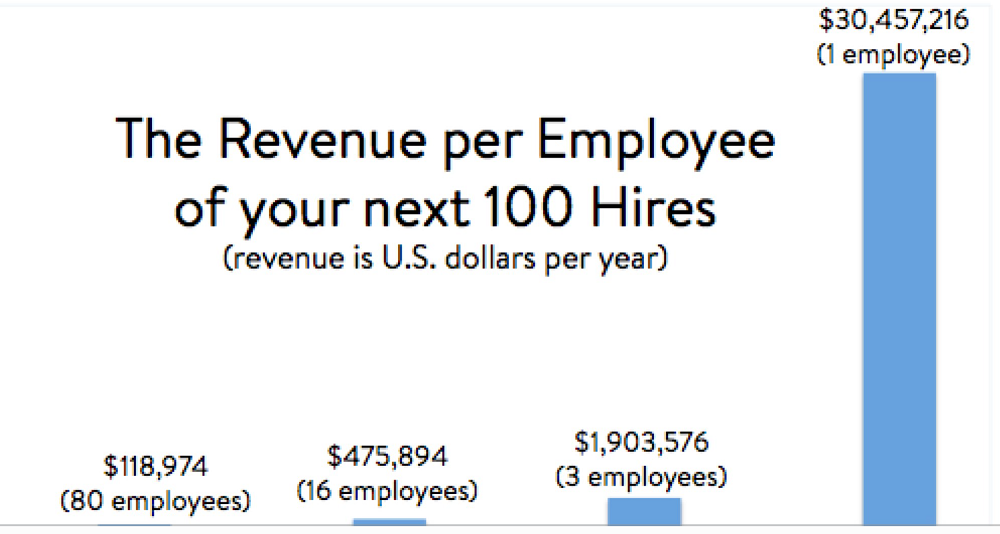 First off, we need a benchline metric to value an employee. Let’s use revenue per employee per year. It’s a simple calculation:

total revenue in a year ÷ average # of employees during the year.

Let’s use the S&P 500 because they have an elite group of publicly traded companies including Apple, Caterpillar, Facebook, Starbucks, Wells Fargo — I think you’d like to shoot for being as productive as those companies, right?

Note: If you’re curious about revenue per employee by industry, I’ve included a list at the bottom of this post.

Ok, so if we go with $475K as what the average employee generates per year, then how do we get to what a superstar employee (aka A-Player, Unicorn, etc.) generates?

Because surely not all employees are identical in producing revenue.

The best mental model we can use here is the Pareto Principle (aka the 80/20 Rule) that states that roughly 80% of the effects come from 20% of the causes. e.g.:

We’re going to take the 80/20 rule hiring to an exponential level.

So, 4 of your best employees will generate a total of $30M per year for you!

If we assumed each of those 4 top employees were identical to each other, then those 4 employees would average a cool $7.5 million in revenue per year for you.

But we’re not finished.

Remember, 80/20 is exponential so you can keep going.

Your Top Superstar is Worth $30.5 Million…Sometimes More

Your very top most productive hire out of the original 100 hires — a superstar or rainmaker if you will — would generate $30.5 million.

The 100 hires breaks down to revenue per employee (in descending order) of these groups:

All of this makes just 3 assumptions:

And, remember, $30.5 million is just the average. The numbers vary by industry.

Superstar Revenue Per Employee by Industry

And if you want to see a list of the top S&P 500 companies ranked by revenue per employee, here it is.

Do you have examples of superstar business folks worth tens of millions of dollars per year to an enterprise?

About the Author — Rob is the Co-founder & CEO of Ongig, the first-ever Employer Branding SaaS that allows employers to attract the best talent in the world faster. Yelp, Autodesk, GoDaddy, Auction.com and BMC Software are among the early customers of the Ongig SaaS.