There’s a ton of interest in neurodiversity terms these days. For example, check out how many times Google users (U.S.-only) asked the following question last month (Jan. 2021):

I started keeping a list of answers to these questions along with words associated with neurodiversity. This helps our clients write more inclusive job descriptions. I decided to put them all in one place in the glossary below.

Ableism — Ableism means the practices or dominant attitudes by a society that devalue or limit the potential for people with disabilities. Ableism is the act of giving inferior value or worth to people who have different types of disabilities (physical, emotional, developmental, or psychiatric). This includes people who are neurodiverse.

#ActuallyAutistic — A hashtag created to highlight the importance of autistic voices and content about autistic people. “It has become both a battle cry and somewhat controversial thing to say, depending on who you are talking to. I use it when I want to identify or reach out to the ND movement.” (source — Holly Loves John)

ADOS (Autism Diagnostic Observation Schedule) — This is a standard used for diagnosing ASD (Autism Spectrum Disorder) in children and is accompanied by information from parent observations.

Alternormative — Types of social and communication norms that exist outside of neurotypical groups.

Aspergers Syndrome — Asperger’s Syndrome is a condition on the autism spectrum that affects how people communicate and interact with others. People with Asperger’s can function highly and may not have learning disabilities associated with other types of autism.

Autism — Autism is a developmental disability that appears during early childhood. Autism can impact a person’s ability to self-regulate, communicate, socialize, and form relationships. There are different types of autism, so some people refer to people as “on the autism spectrum.”

Autist — Autist is used to describe an autistic person in the singular form.

CBT (Cognitive Behavioral Therapy) — CBT is a type of talk therapy that helps with creating solutions for sensory issues with light, touch, and more.

“an alternative to the word “disability” intended to remove the term’s negative connotations of disabilities.” (source — Disabled World)

Dyscalculia — Dyscalculia is when a person has difficulty with calculations and numbers.

Dysgraphia — Dysgraphia is when a person has difficulty spelling or putting thoughts together on paper.

Dyslexia — Dyslexia is when a person has difficulty reading. People with dyslexia may also have difficulty with comprehension, spelling, and writing.

Dyspraxia — Dyspraxia is when a person has difficulty with movement and coordination. Many people with Dyspraxia also have ADHD or other sensory processing issues.

Echolalia —  Echolalia is when a person with autism repeats something they hear back to another person. It’s sometimes called “movie talk” or “scripting”.

Hyperlexia —  Hyperlexia is when a person has the ability to read at a very young age.

“Often misdiagnosed or misunderstood, there is relatively little research on this phenomena and was only first noted in 1967. Hyperlexia is thought of as a “splinter” of the autism spectrum. While this might sound like a pure advantage, it can often result in difficulty with socializing, an impaired ability to understand speech, and a potential “difficulty with, and paucity of, abstract thinking”. Individuals with hyperlexia are shown to be adept and precocious readers and can have incredible abilities of memorization and retention.” (source — Daivergent)

Hypersensitivity/Hyperresponsiveness — When a neurodivergent person has a very high or intense response to a certain stimulus. (e.g., colors, smells, textures, or sounds)

Hyposensitivity/Hyporespinsiveness — When a neurodivergent person has a very low response to a certain stimulus. (e.g., light, sound, pain)

Idiosyncratic Language — A language that often has private meanings. Idiosyncratic language is used by people on the spectrum and only understood by people familiar with phrases and where they came from.

Movie Talk —  When a person with autism repeats something they hear back to another person. It’s sometimes called “scripting” or “echolalia”.

Neurodivergent (ND) — ND means a person who has atypical neurological configurations. (e.g., a person with Asperger’s syndrome or dyslexia).

What does it mean to be on the spectrum? Check out Neurodiversity: The Definitive Guide for more about the meaning of neurodiversity and its examples in the workplace.

Neuroatypical — A person who does not have a neurological difference, like autism.

Neurotypical — Neurotypical is often abbreviated as NT, and it means to have a style of neurocognitive functioning that falls within the dominant societal standards of “normal.” Neurotypical can be used as either an adjective (“They’re neurotypical”) or a noun (“They are a neurotypical”).

Neurominority — Neurominority refers to an underrepresented group of Neurodiverse people who may face challenges or bias from society.

Neurominority Stereotype — A generalization or bias towards people who are neurodiverse.

Neurovariance — Another way to describe neurodiversity or neurodivergent.

On the Spectrum — On the spectrum refers to someone who is on the Autism spectrum or with ASD (Autism Spectrum Disorder).

People-First Language (PFL) — People-first language puts a person before a diagnosis or way of being. It describes what a person “has” rather than saying what a person “is.” (e.g., “a person with Autism” vs. “Autistic”)

Regressive Autism — Regressive autism is a condition in which a child appears to develop typically but suddenly begins to lose speech and social skills. It is also called autism with regression, autistic regression, setback-type autism, and acquired autistic syndrome.

Savant — A person who has special talents, usually in math, art, or music.

Scripting —  When a person with autism repeats something they hear back to another person. It’s sometimes called “movie talk” or “echolalia”.

Self-stimulating/stimming — Behaviors used by people on the autism spectrum to assist with concentration or calming. (e.g., rocking back and forth, making noises, spinning, moving hands, or skipping)

Splinter Skill — A splinter skill is a skill that is stronger than other skills. For example, a person with autism might do certain skills very well but have less ability in other areas.

Stereotyped behaviors/Stereotyped language — When a person with autism excessively repeats an action or a phrase over time.

Transition — A change from one activity to the next, or from one environment to another. People who are on the autism spectrum might struggle with transitions.

Visual Schedule — A tool that helps a person with autism know what to expect next in a series of activities.

This screenshot shows an example of using people-first language instead of the term “the disabled.” Phrases like “people with disabilities” or “a person with autism” is more inclusive. 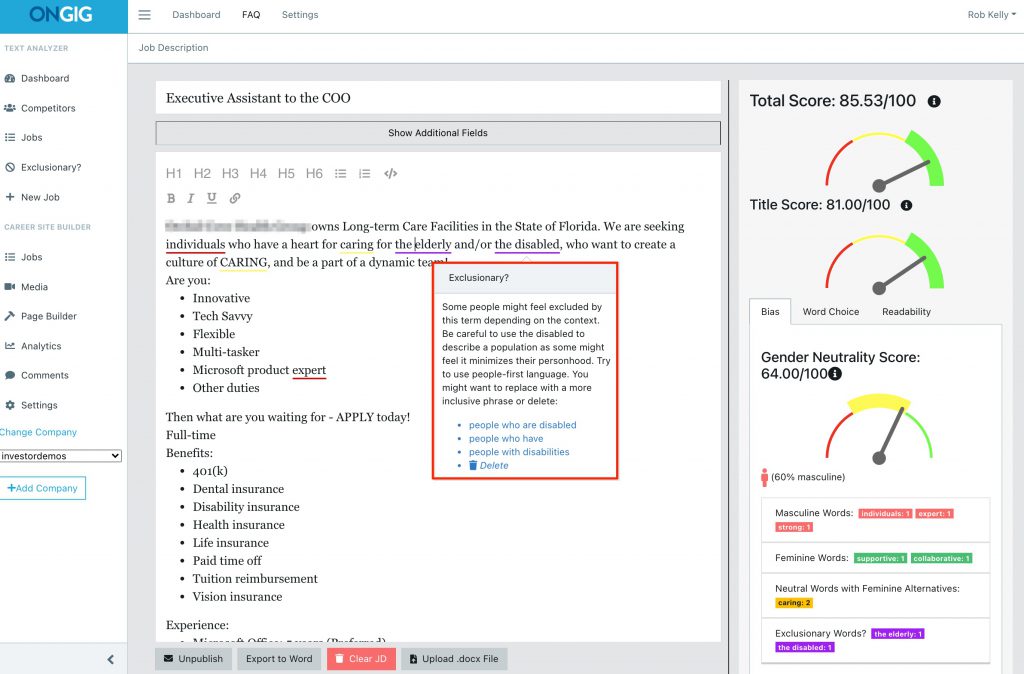 The next image shows “you” as a simpler synonym for the complex phrase “the ideal candidate.” The word “you” not only makes it easier to read for someone with dyslexia, but it also puts the content in the first-person language. Saying “you” speaks directly to candidates and removes extra syllables. Win-win. 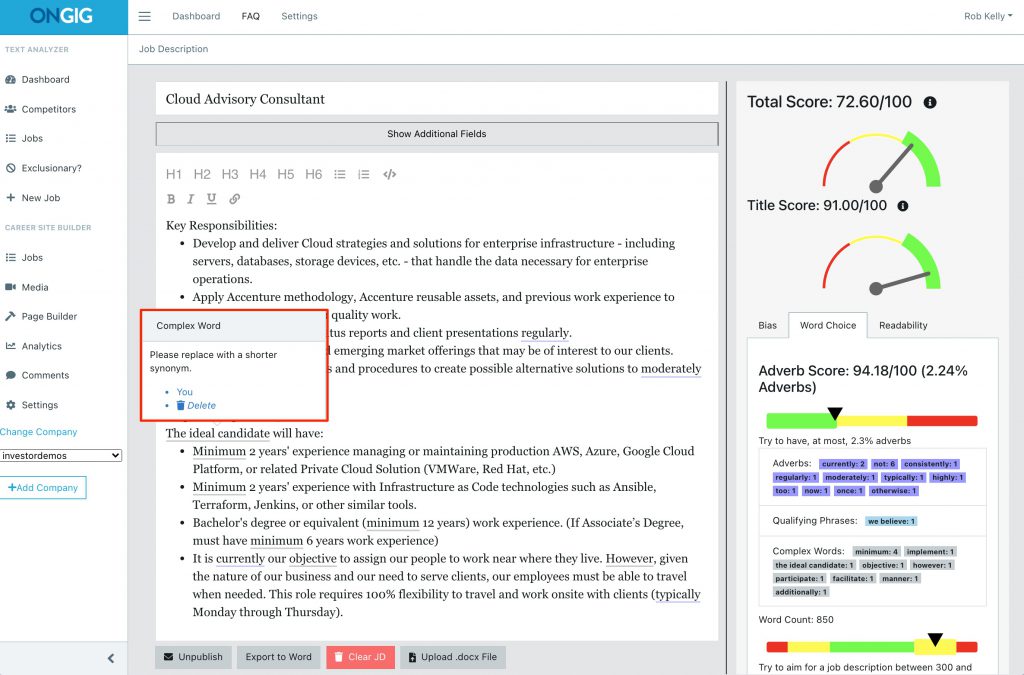 And this screenshot shows a job posting with extra-long sentences (highlighted in red and yellow) and an extra-long list (highlighted in purple) of responsibilities. Some candidates might get bored or have difficulty reading long lists of bullet points, especially if they are neurodiverse. Making sentences shorter and creating simpler lists helps improve your readability scores. 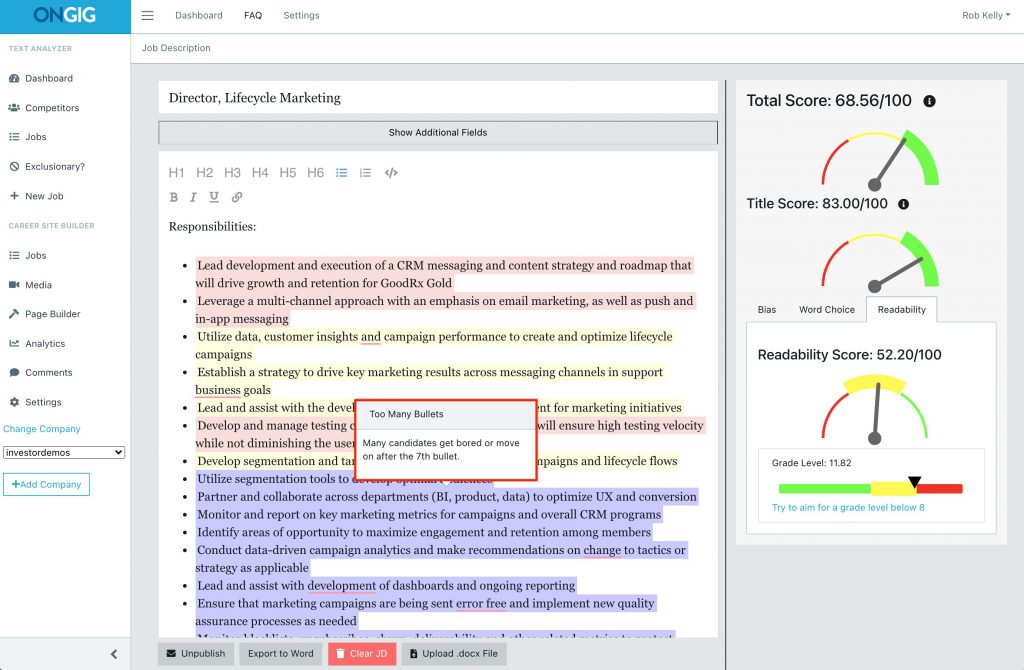 February 23, 2021 by Heather Barbour in Diversity and Inclusion