Nationwide Insurance has one of the most creative ways to reduce employee turnover that I’ve seen in a while. Many call it a “realistic job preview” and they’re leveraging it for the customer service role at their call centers.

What is a realistic job preview? It’s any device (automated or manual) that helps provide candidates a preview of their job opportunity. While Nationwide’s is an automated video/quiz-based process, many other employers (including Walmart) provide low-tech realistic job previews such as an in-person tour of a logistics center.

The Nationwide realistic job preview (below) asks the candidate 10 questions through video, text and images with the applicant selecting from 3 multiple choice answers for each question.

This is quite clever. 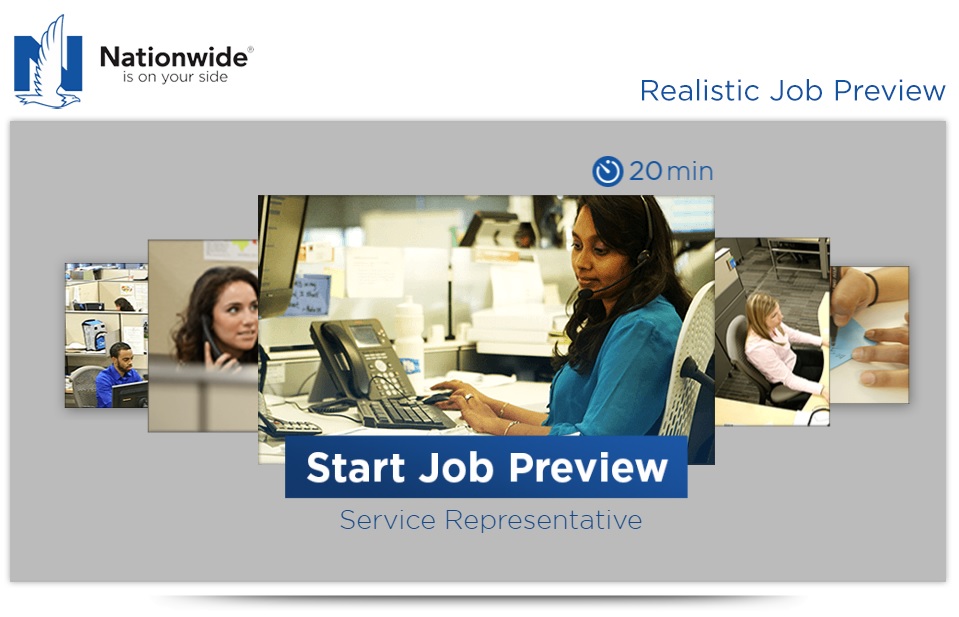 The 5 Part Format of the Nationwide Realistic Job Preview

First, Nationwide gives a little background on a situation the candidate will likely face. For example, that the customer service rep in the call center may get back to back calls. 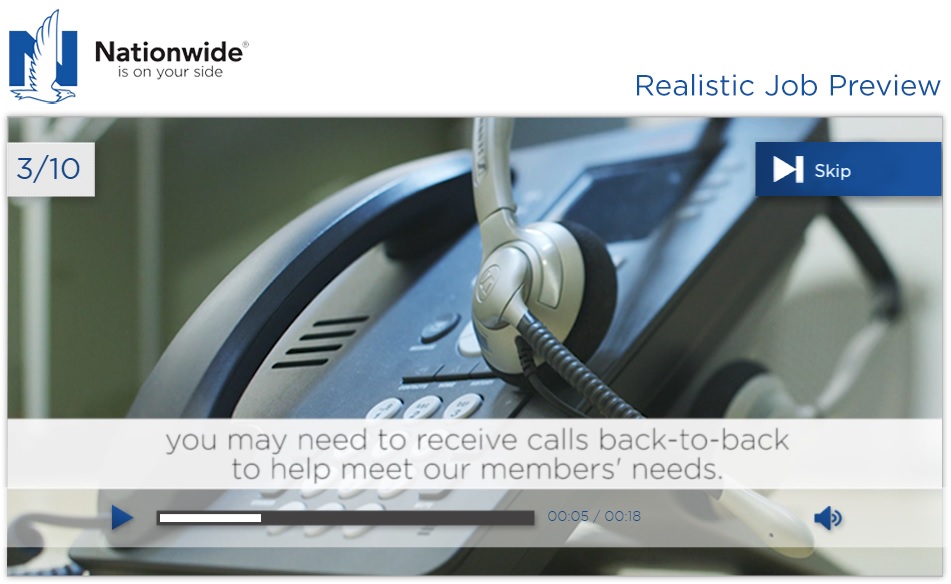 Part 2: Mention the skill that you need for that job scenario

Then, Nationwide reinforces to the candidate that back-to-back calls means that following rules and schedules is very important. 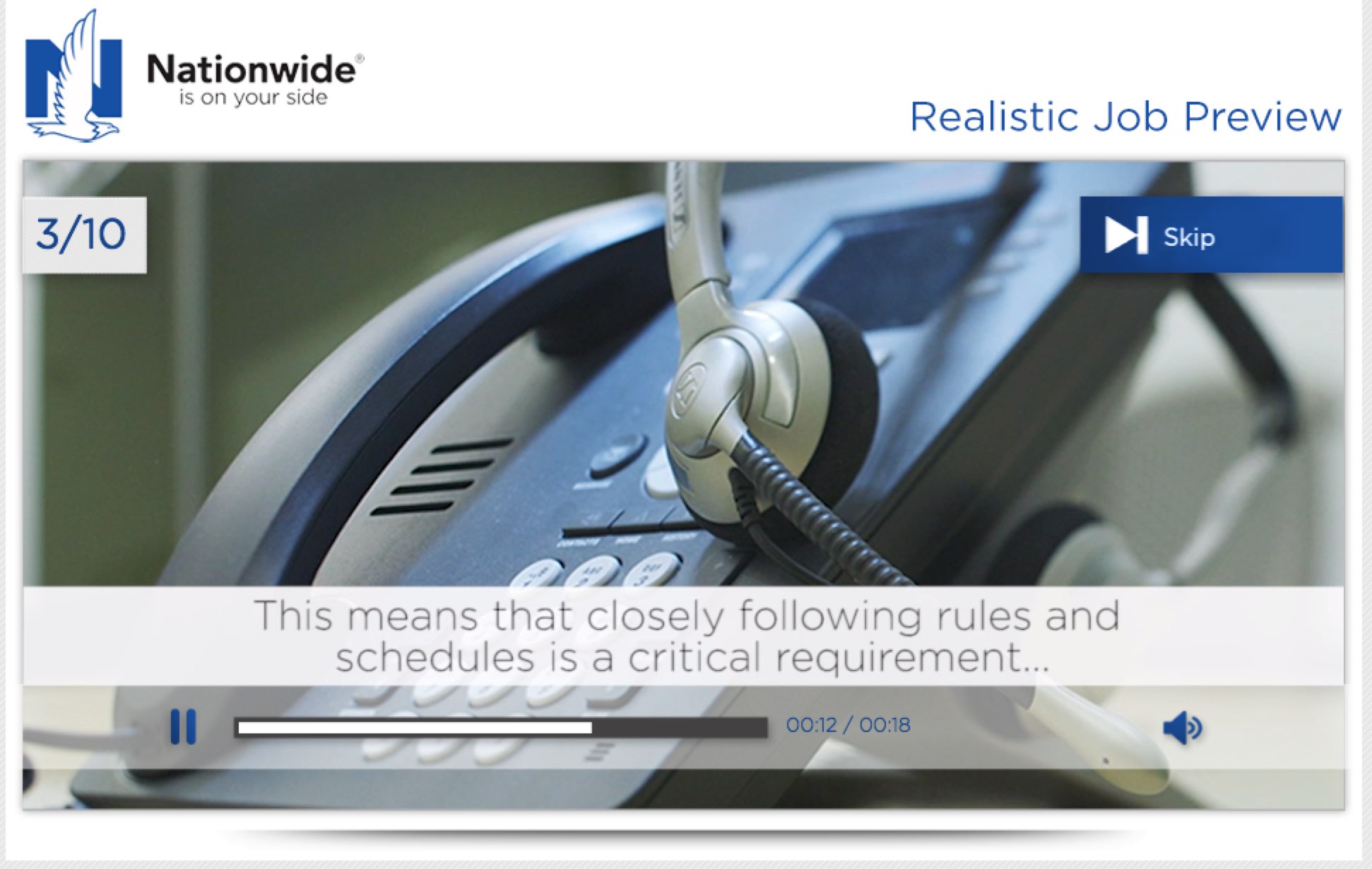 Part 3: Ask a question about that specific job scenario

Nationwide then asks if the candidate would enjoy that type of environment: 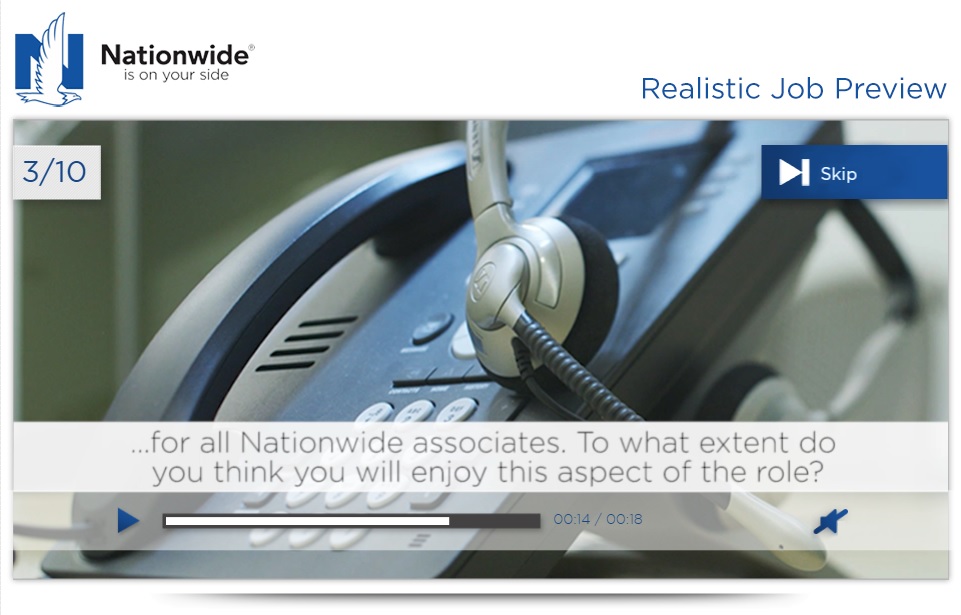 Part 4: Give the candidate multiple choice answers for what they would do/how they feel if they were in that job scenario

The candidate is given 3 multiple choice answers (A, B and C) below.

Tip: If your whole idea is to reduce turnover (i.e. hire better quality candidates), then you need to have just one correct answer (candidates answering correctly are the ones you want more of!) and then a couple of incorrect answers (those are candidates you likely don’t want to ever apply). 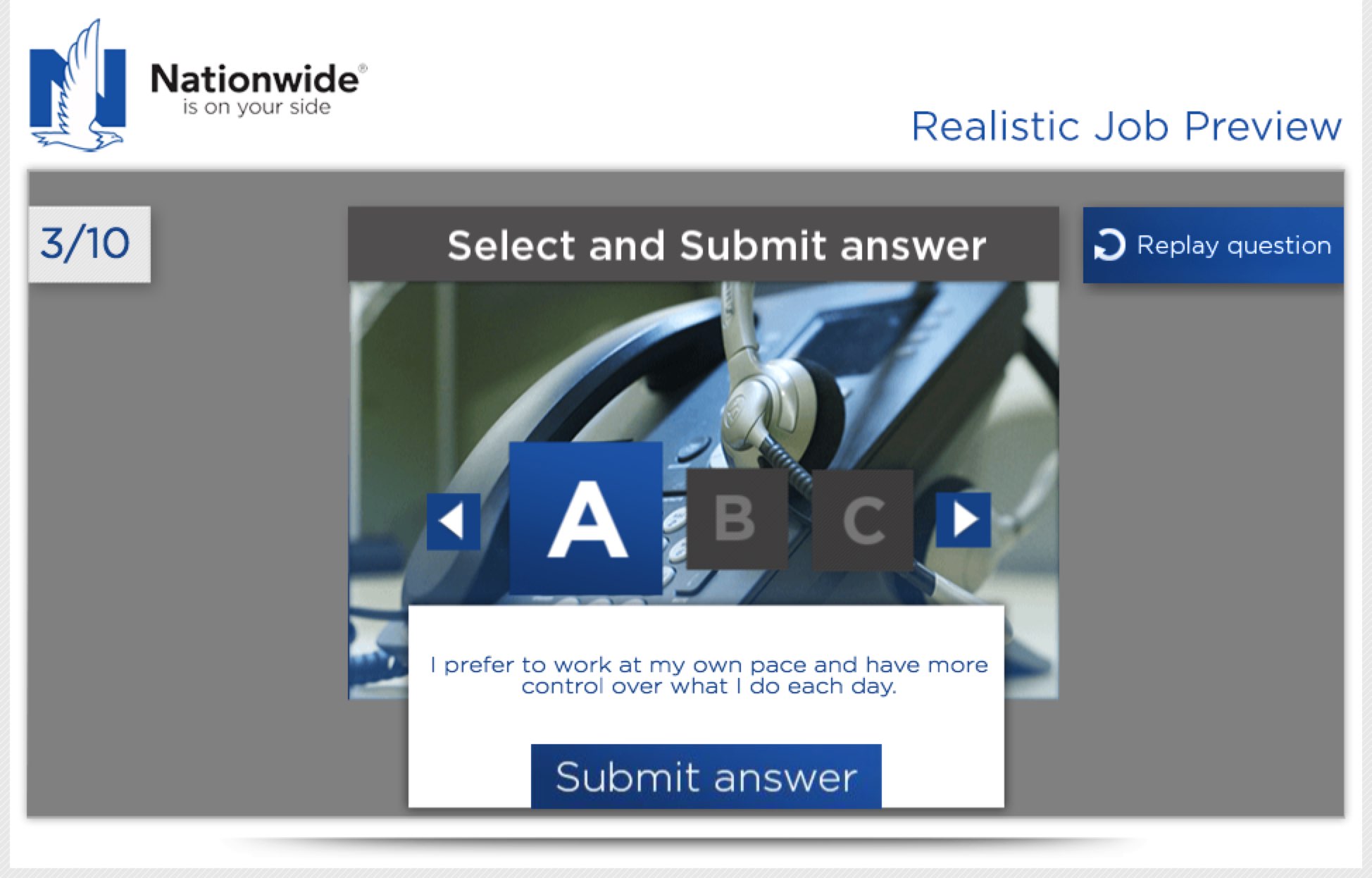 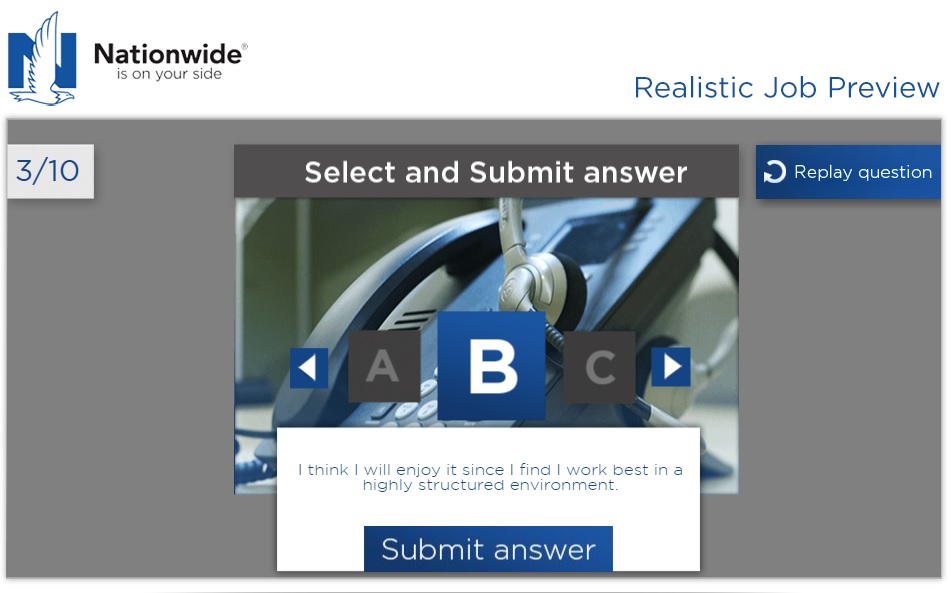 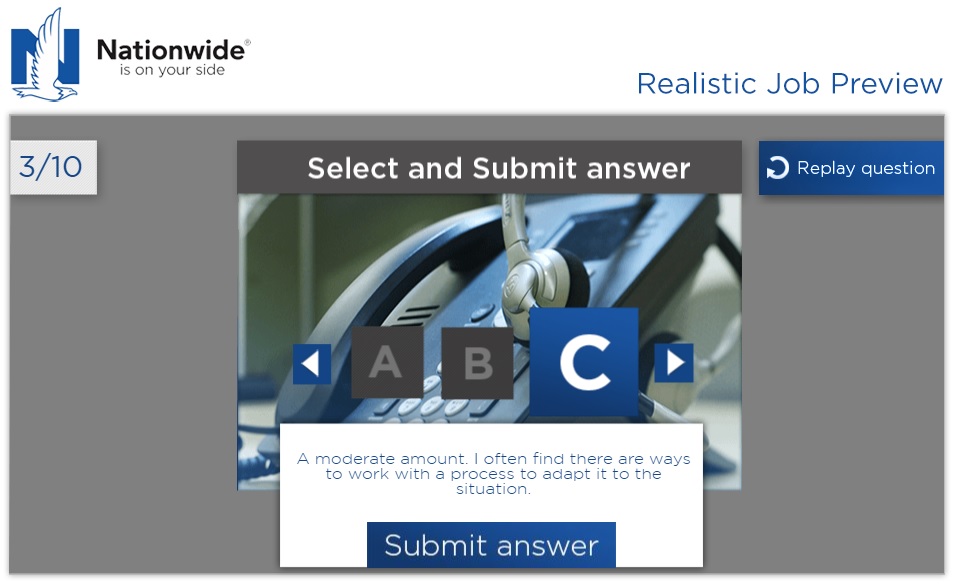 Part 5: Provide feedback on the right type of answer

Nationwide then gives feedback to the candidate based on which answer they chose.

For instance, if they Answer A (in which the candidate wants to control their own schedule) then the candidate would get this feedback discouraging that type of behavior as unacceptable: 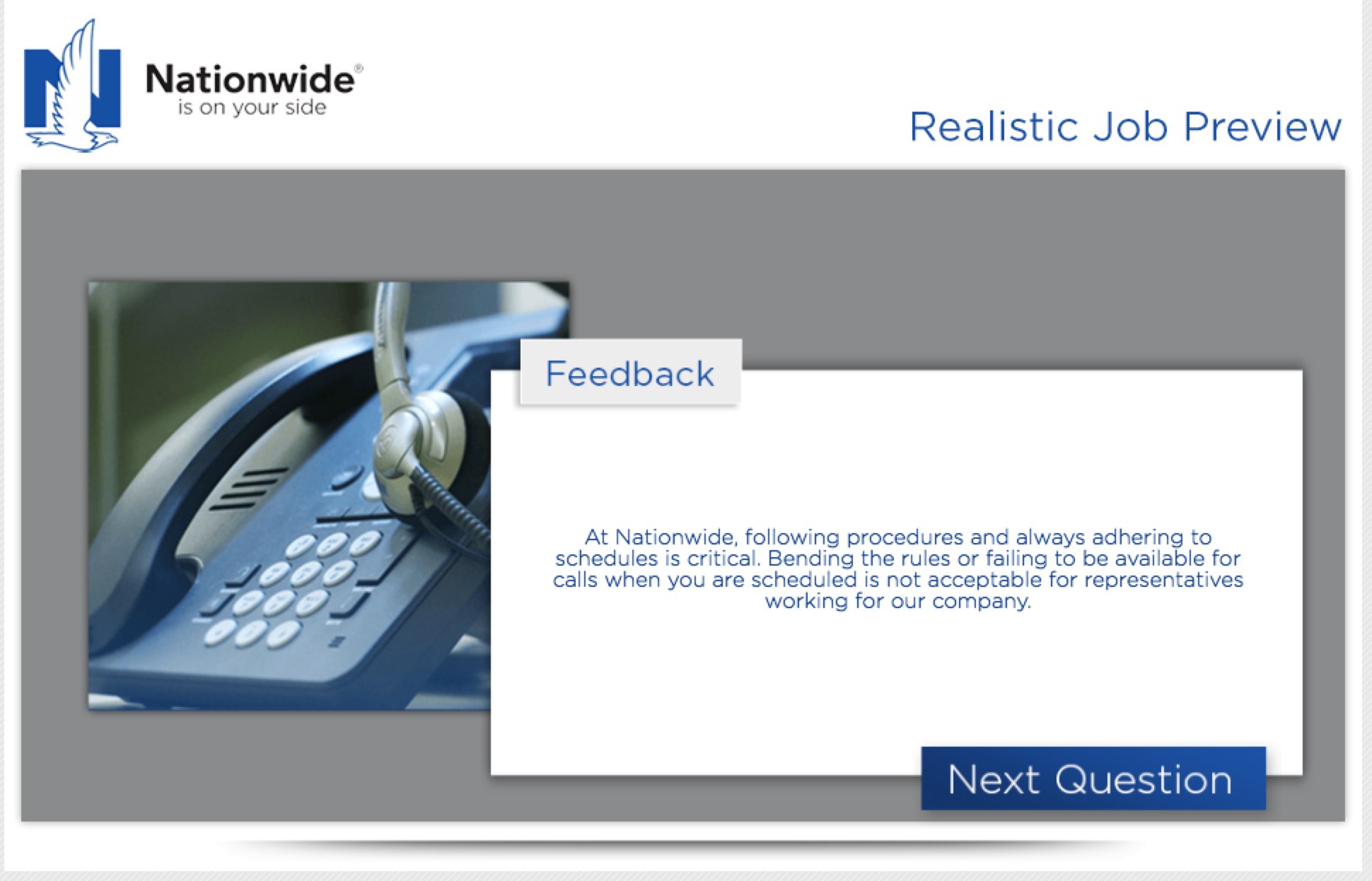 …if they chose Answer C they would get this feedback (also discouraging): 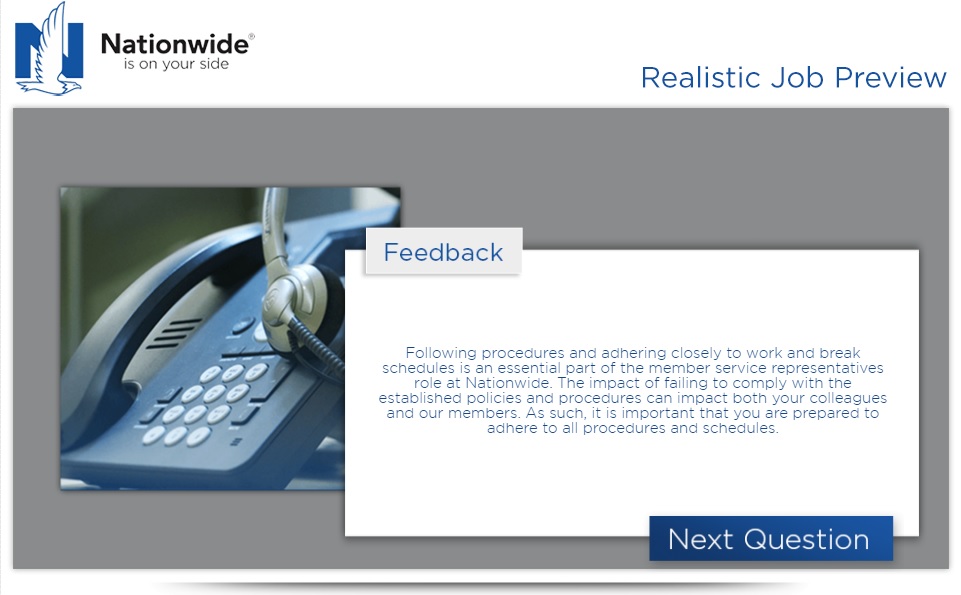 Remember, if you are trying to reduce staff turnover then you want to alienate this non prospect! Let them pursue another job at your company or even elsewhere.

Answer B is the right answer and they would get this feedback if they had answered correctly: 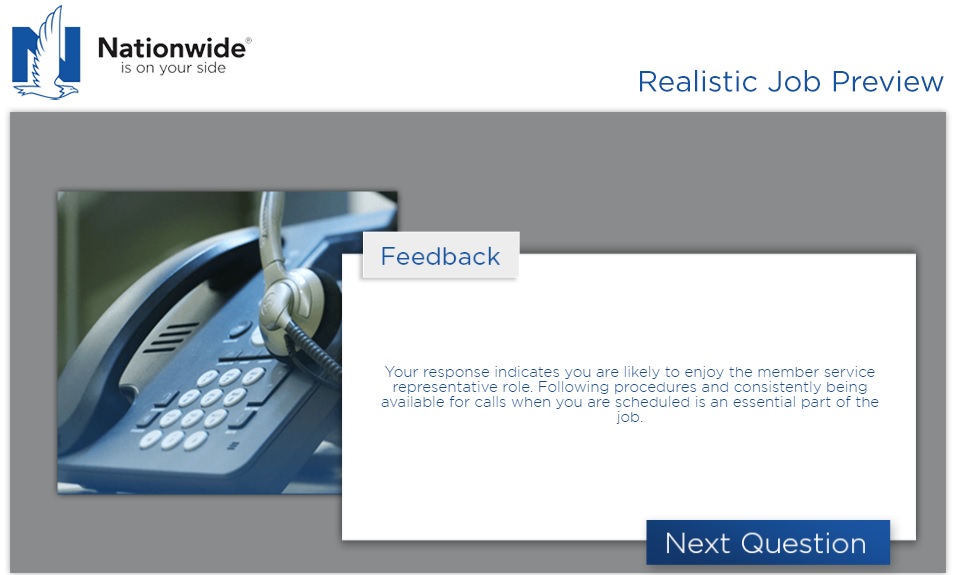 That was all an example of just one job scenario  — there were 10 scenarios/questions in total. 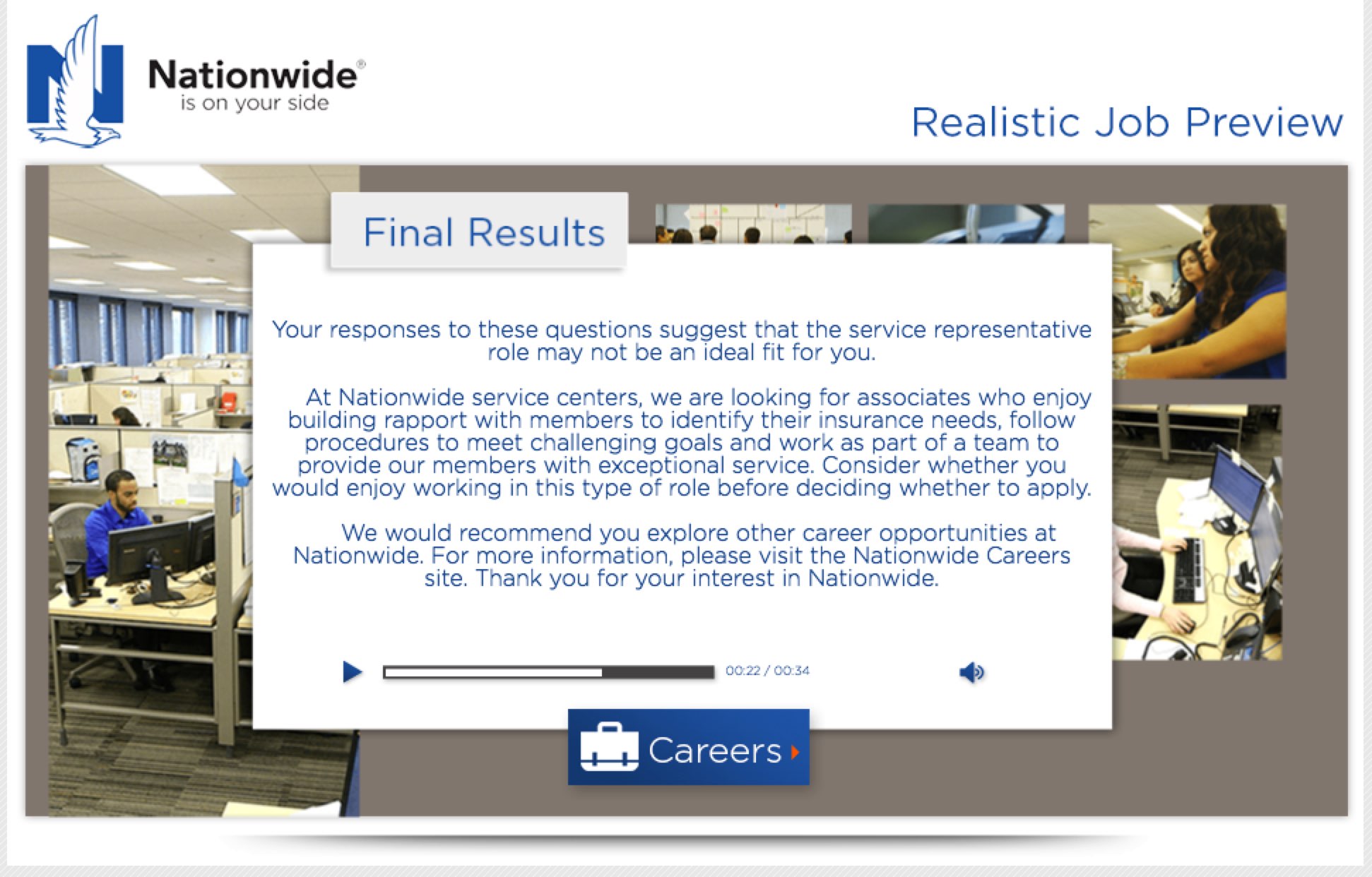 …and if the candidate has enough right answers then they get this type of final result message: 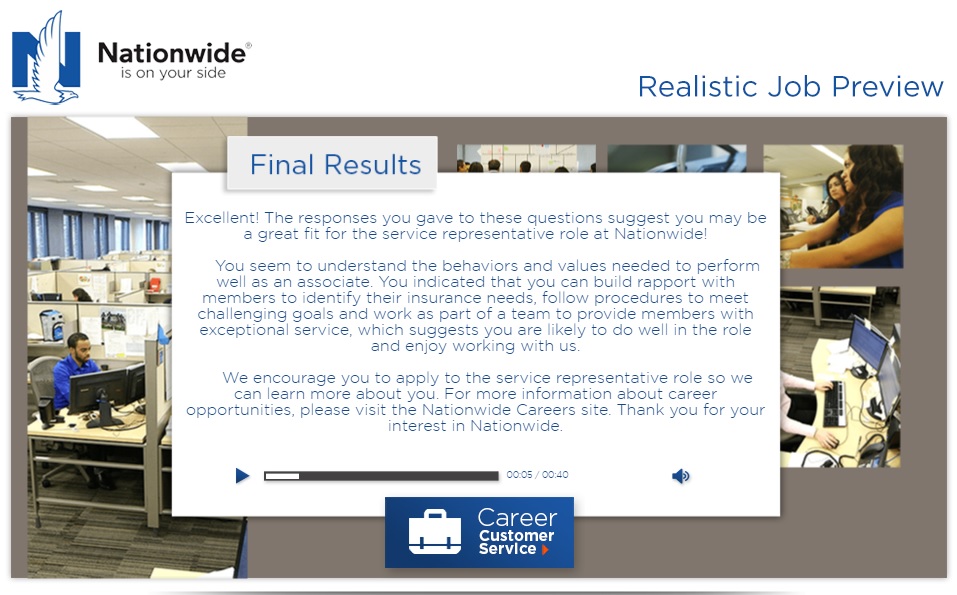 It’s key to note here that Nationwide doesn’t record the answers and candidates can still apply even if they get the discouraging final results.

If you’re looking for ways to reduce employee turnover, a realistic job preview is a great tool to test out. We’ll let you know if Nationwide shares its results.