Job descriptions are in the news lately. A lot of controversy. I’m hoping you’re not in any of them.

That got me digging. I went back a few years to find stories related to controversial job postings. There’s Uber, Abercrombie, Walmart and other lesser-known names as well.

I’m starting a list here as a central place to view them. It’s in reverse chronological order — I’ll add any new ones that come up to the top.

And, perhaps most important, I’m listing the main learning from each. Enjoy.

Note: For tips on writing job descriptions, check out How to Write a Job Description — Best Practices & Examples.

The gist: Former New Jersey Schools Development Authority CEO Lizette Delgado-Polanco hired people with personal connections to her yet had not written job descriptions for them, according to USA TODAY NETWORK NorthJersey.com findings (see Facing pressure, NJ schools authority made up job descriptions for people it already hired).

Delgado-Polanco then instructed her team, according to NorthJersey.com, to cover their tracks by writing job descriptions for those hires after the fact. 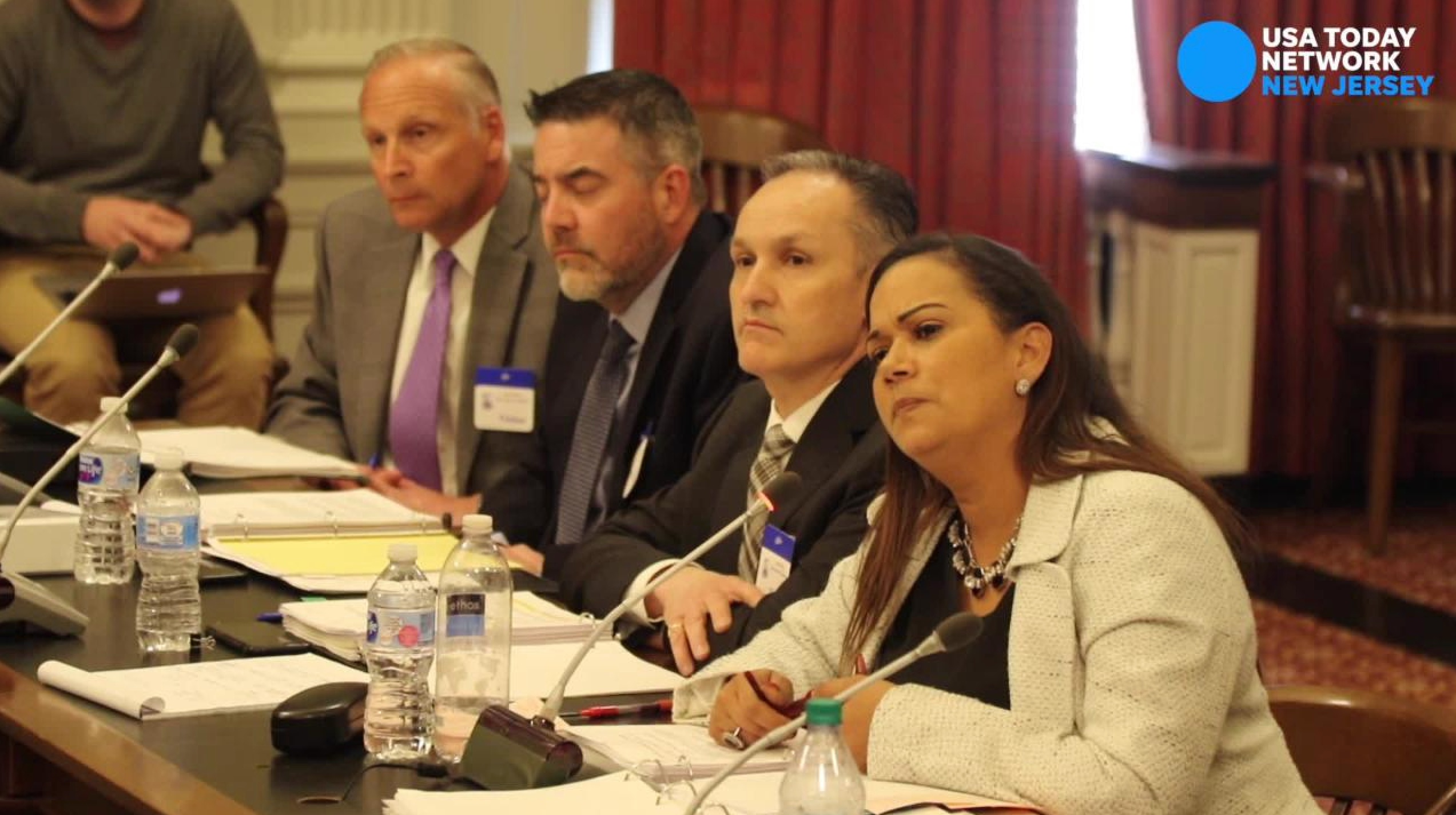 Lesson Learned: Post-dating job descriptions, if that’s what happened, could get you into trouble (or, at a minimum, a lot of bad publicity).

The gist: Cynet Systems, an Inc. 5000 company out of Ashburn Virginia, published an Account Manager (Pharma) job posting on LinkedIn that was screenshot by Helena McCabe on Twitter: 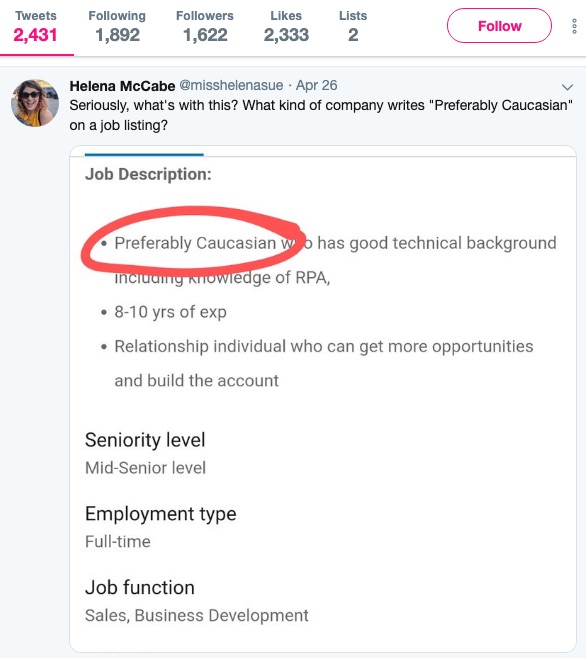 The “preferably caucasian” requirement caused 9,133 comments (almost all negative), 8,486 retweets and 14,401 likes on Twitter (nearly all comments were negative).

Lessons learned: As I wrote in 5 Lessons I Learned from Cynet’s “Preferably Caucasian” Job Posting Debacle, the 5 lessons learned were:

The gist: In 2016, Walmart began a transition to change its front of the store “Greeter” job description to include new responsibilities such as scanning receipts and checking shopping cart contents, assisting with returns and helping keep entrances clean and safe.

In February 2019, NPR (National Public Radio) reported that there were multiple EEOC complaints and a lawsuit by Greeters related to this. Many Greeters with a disability or who were elderly felt targeted because they could no longer perform the new job. 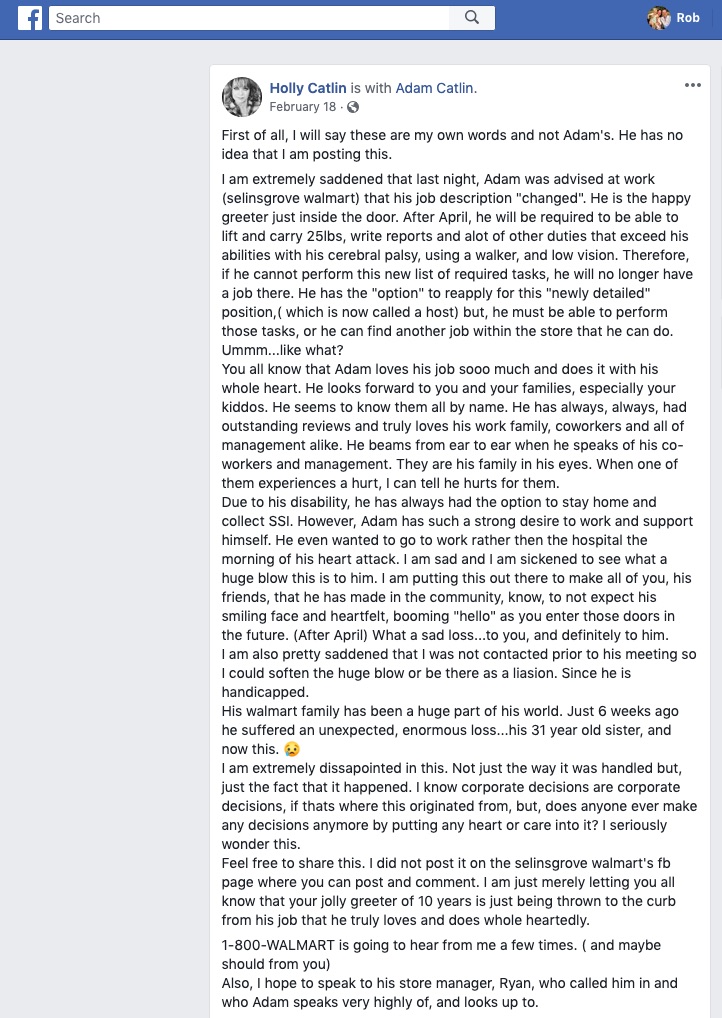 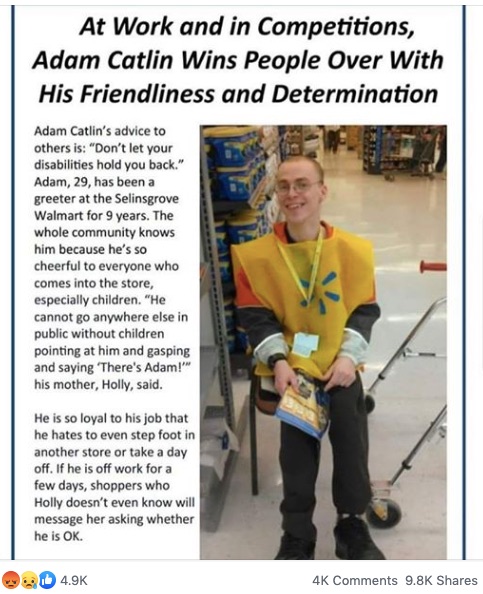 Lesson learned: Walmart may have had good intentions with their new Greeter position (they were trying to do more for the customer). But they underestimated the impact on people with disabilities and the elderly.  Wharton marketing professor Americus Reed gave Walmart grades like a “D-” and an “F” for the crisis management part of handling the fallout.

The gist: The “Hamilton” play had this open casting announcement which mentioned: 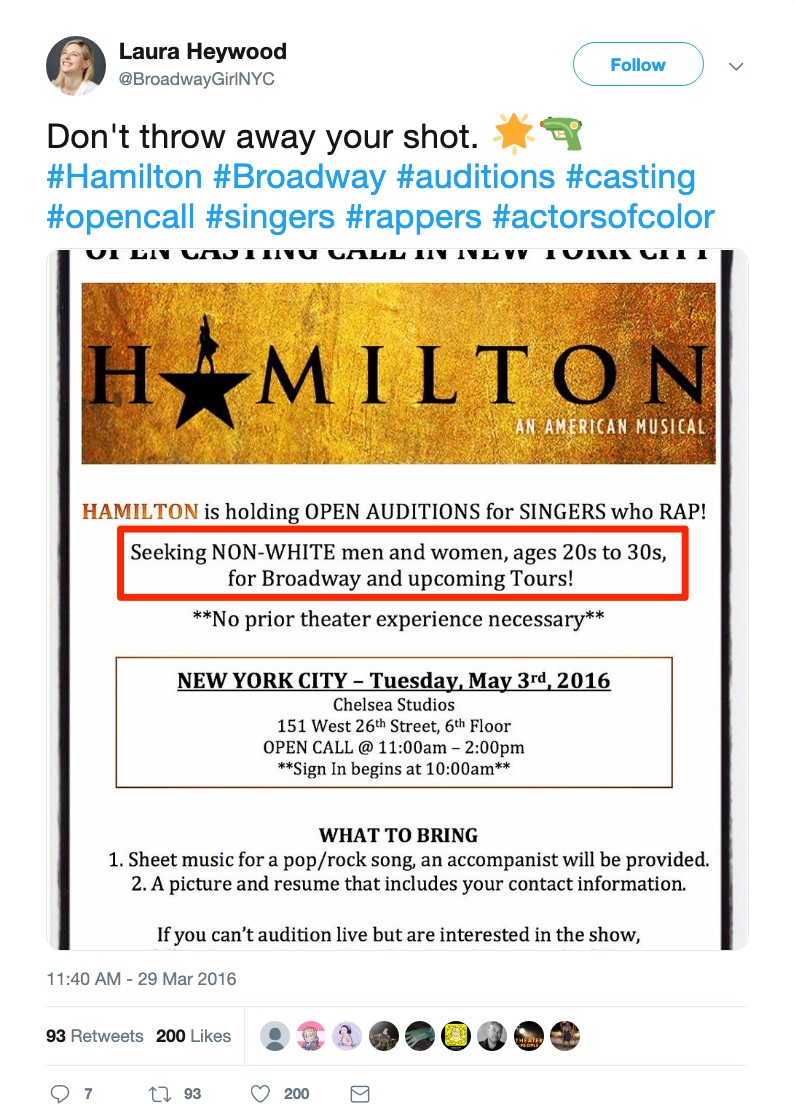 Lesson Learned: The main insight it’s that it is legal to list race as a requirement under this circumstance, says attorney Ron Kuby in this Daily News article: ‘Hamilton’ hiring practices under fire after casting call solicits NON-WHITE actors only. The EEOC’s bona fide occupational requirement allows you to make race a qualification if it’s “essential” to the job.

He noticed that Uber had posted a job description on its careers site that included some unusual language in the intro: 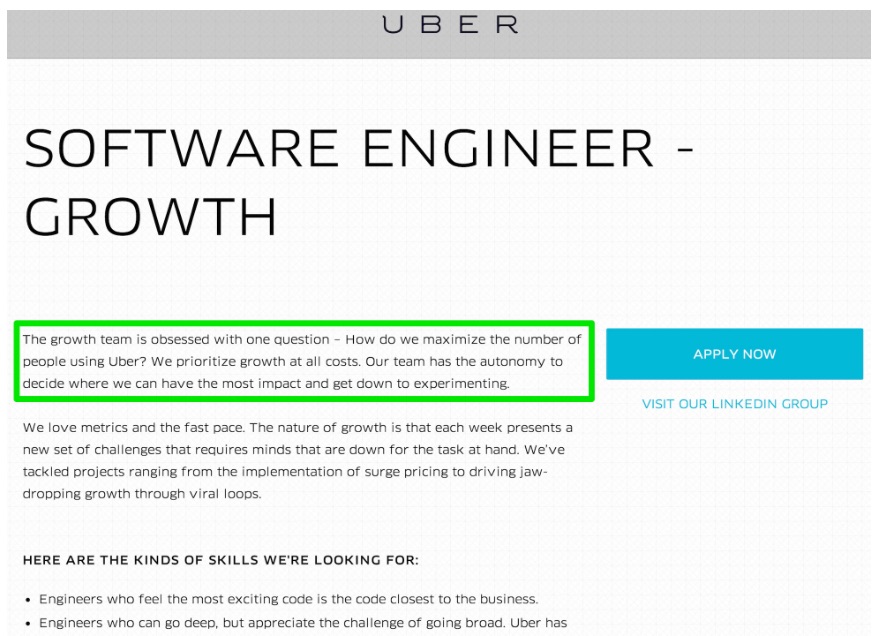 In particular, the phrase “we prioritize growth at all costs” hit a nerve because Uber at the time had some bad publicity (attacks on riders, journalists threatened, drivers striking, etc.).

The article went viral (100,000+ views and 267 comments). Many comments supported Uber’s approach of being polarizing to find the right candidates.

Lesson learned: You really are what your job ad says you are. Uber at the time often did show a “growth at all costs” mentality.  Uber later focused on correcting course on much of their controversies and has since mellowed in the language they use in their job ads.

The gist:  In March 2014, CareFusion was looking for a Senior Counsel, Procedural Solutions. They likely didn’t think much about one line in their job posting that said the applicant needed:

Plaintiff Dale E. Kleber (pictured below), a 59 year-old with 25 years of experience, applied. 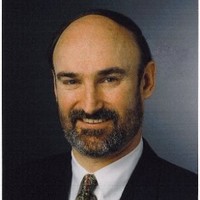 Kleber was not granted an interview and sued CareFusion under the Age Discrimination Employment Act (ADEA), 29 U.S.C. §§ 621-634.

CareFusion later won on appeal (in January 2019) after an appeal judge ruling that the ADEA covered employees only (and not candidates).

Lesson learned: Avoid putting caps on years of experience. Instead, focus on the skills you need.

For example, if you think you need to hire a social marketing person with 3 to 5 years experience, focus instead on the skills that you’re envisioning that candidate needing (e.g. experience with WhatsApp, Facebook and Instagram).

The gist: In February 2010, American-based Abercrombie & Fitch sparked a storm of protest after marketing a recruitment poster that read:

“We are looking for cool and good-looking people to come and represent our brands. 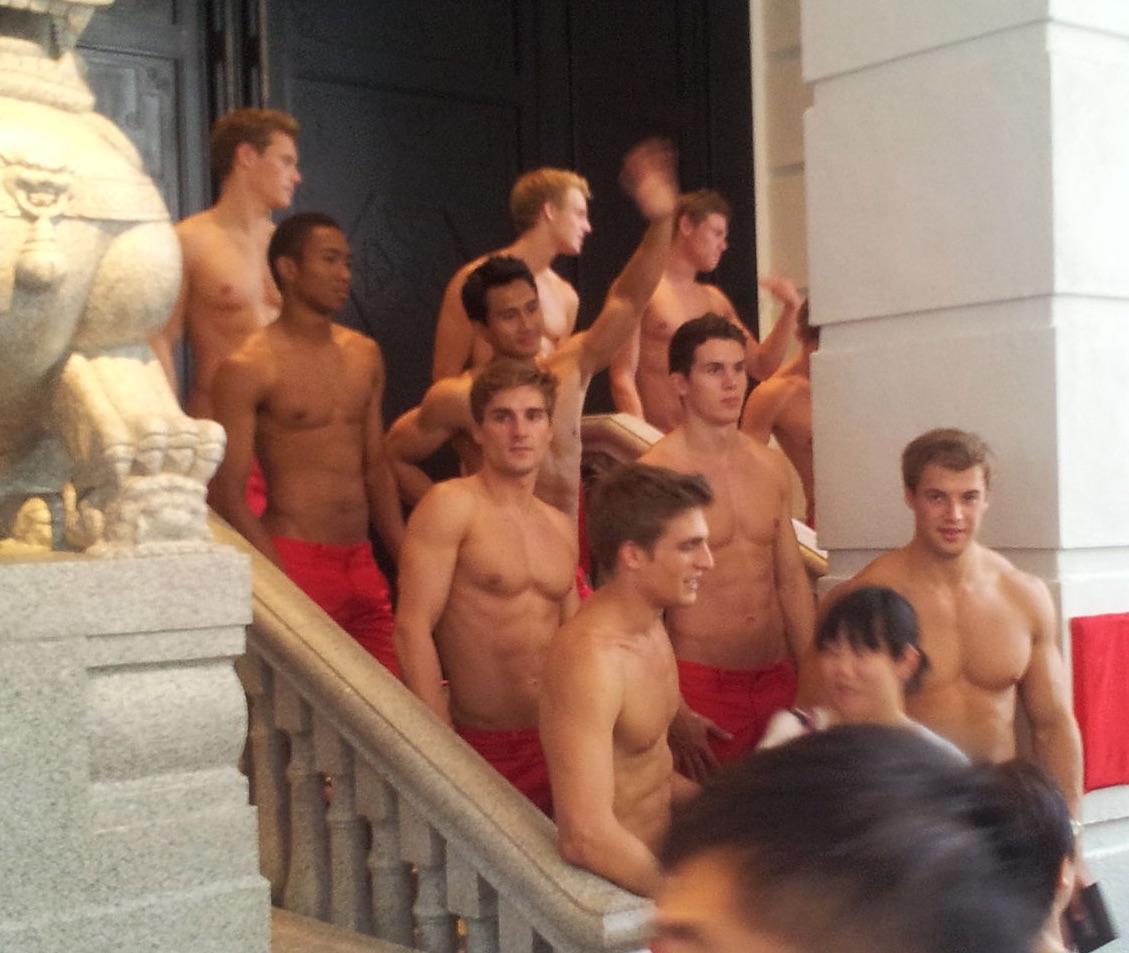 Screenshot of original photo taken by Iflwlou via Wikipedia Commons

Employment law attorney David Hughes at Simpson & Marwick told The Scotsman that the advert, alone, did not breach discrimination laws. But he added that it could create a legal inference that Abercrombie & Fitch intended to apply unlawful or discriminatory practices in hiring staff. That could lead to problems with other complaints/lawsuits.

Fast forward to 2015, in the U.S. The Supreme Court ruled in favor of Samantha Elauf, a young Muslim woman who said Abercrombie denied her a job because her headscarf didn’t comply with the company’s “look policy” which at one point dictated the following according to this article by Sapna Maheshwari of Buzzfeed: “Exclusive: The Hairstyles Abercrombie Has Deemed “Unacceptable”

” fingernail length (no more than ¼ inch beyond the tip of the finger, preferably unpolished) and hair color (“sunkissed” highlights were okay, but no “extreme styles” 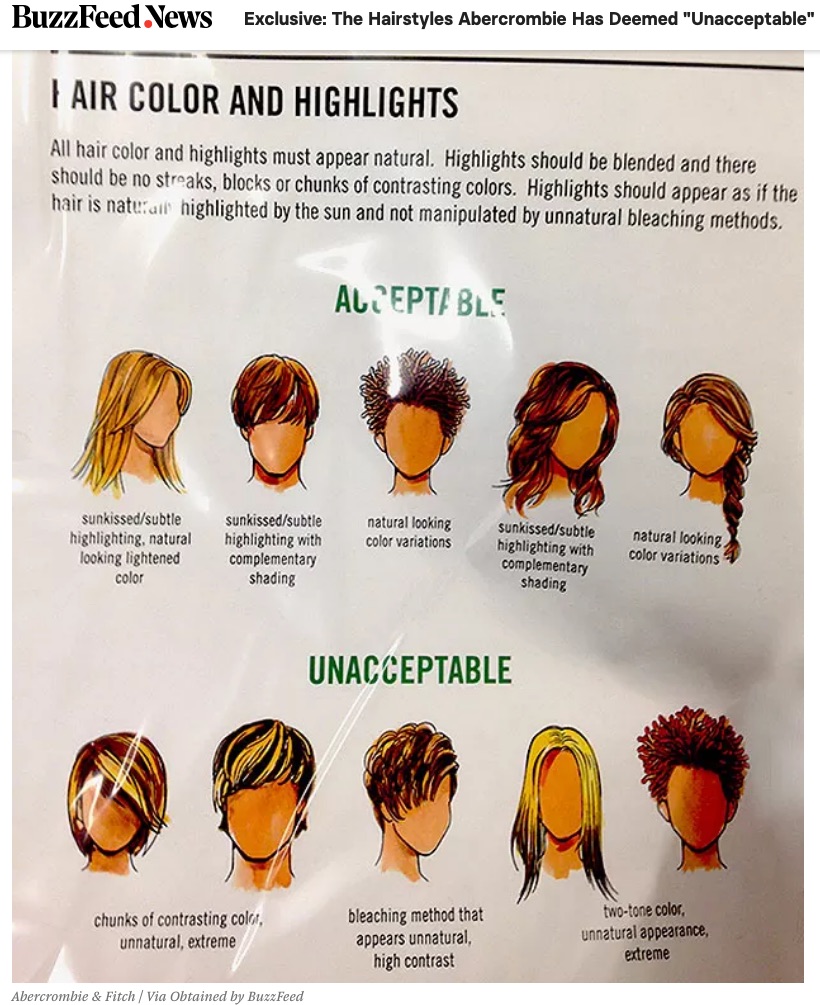 Lesson learned: The earlier job ad in Scotland was an early warning sign that Abercrombie might have additional troubles later on.

Know of any other controversial job ads?

Please comment on them below and we’ll add them to this list. All I ask is that there is documented proof of the story that took place. I really appreciate it!

Why I keep this list of controversial job ads?

My team here at Ongig is on a mission to transform your job descriptions to attract top-tier, diverse talent. We also want to keep you out of trouble with anything related to job descriptions. We consider this to be “insurance”. Please click our Request a Demo button on this page if you’d like to learn more about Ongig’s job description software.