I first heard the term “A-Player” when I studied under Topgrading author Brad Smart. I took detailed notes during my workshop – after all, the legendary GE CEO Jack Welch had been one of Brad’s pupils. 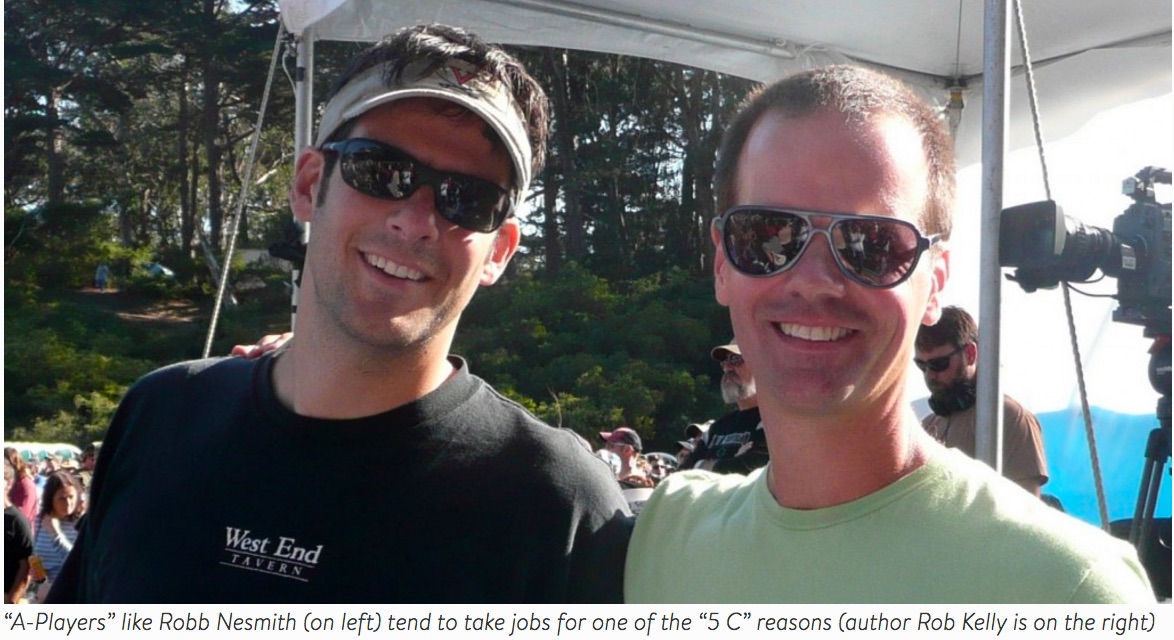 Note: Brad Smart defined an A-Player as the top 10% of those qualified and available for a position.

Ongig has been talking to a bunch of San Francisco A-Players lately as we’ve prepared our new business.

We find that A-Players will only switch jobs if the new opportunity adds value in one or more of 5 specific areas.

To make these 5 areas easy to remember, we’ve named each with a word starting with the letter “C.”

A-players care about Career development, and sometimes they hit a ceiling with their current employer on it.

As we mentioned in “The 7 Reasons We Believe Hiring Is Being Reinvented…Right Now!,” a worker’s manager is the most important part of their job.

An A-Player will jump at the chance to work with a manager who has more skills and experience than their current manager.

Every A-Player wants to develop their skills.

An A-Player looks to learn new skills from their team, their project (e.g. a more scalable version of what they have already done) or from curriculum/training (including conferences, seminars).

San Francisco’s Robb Nesmith (pictured above) joined Right90 from Genentech based on both the skills and hiring manager:

Robb also valued the opportunity of working in a startup (which he had never done).

The Second “C” is Culture.

A-Players look for a couple of key cultural requirements:

A)   People — The team has to fit for them chemistry-wise. This includes their manager, peers and overall leadership. An A-Player is highly attracted to a work environment in which the people on the team they’re joining are like them or like the person they want to be!

A-Players are often driven to a job by its ability to let them exercise their Creativity or Calling.

I’ve got a programmer friend in the government who told me recently:

“I would take 20% less pay per year if I could find an educational startup to work on.”

That’s because he feels his “Calling” is education and compensation isn’t the top ‘C’ (see #5 below).

A-Players have earned the right to ask for Convenience in their jobs. There are two main types of convenience:

The physical location of a job is key to most A-Players. The only reason an A-Player would commute a long distance is if they are rewarded with many of the other ‘C’s’ mentioned here.

If an A-Player is commuting a long-distance, they will jump at the chance to work closer to home (A-Players value family/friends/personal time highly).

Ongig has met numerous workers here in San Francisco who not only demand that they work in San Francisco proper, but they also prefer to work some place they can reach by bicycle or easily by public transit.

A-Players typically want to work the hours they prefer — afterall, A-Players are about performance, not punching in the clock.

For example, many young engineers we know here in San Francisco want to be able to arrive in the office at 10am or later…and are willing to work late into the night.

At the same time, many more experienced engineers we know demand to work more “normal” hours, such as 9am to 6pm…so that they can get home to their families (if an A-Player has immediate family, they are typically spending dinner with them).

We know one allstar San Francisco developer who won’t even consider a job if he thinks it looks like the founders are the types to pull all-nighters on a regular basis.

He’s a stud of a programmer and has earned the right to get home to have dinner with his wife and kids by 630pm every night.

They want to be paid fairly (above-average market rate) with an opportunity for bonus and equity if applicable.

That said, we haven’t run into a single A-Player who would switch a job for compensation alone.

As Trevor Usken, who just joined GigaOM in San Francisco, told us:

“I think a lot of young workers have it wrong and go after pay and not experience…pay is not a big deal for me — if I work hard, I know the money will work out.”

A higher compensation package might attract them to look at an opportunity; but if a few of the other ‘5 C’s’ aren’t also there, the A-Player will quickly lose interest.

The more of the ‘5 C’s’ that exist in a job opportunity, the more willing an A-Player will be to switch to a new job.

It isn’t that all ‘5 C’s’ have to be met…but in our experience, if at least 2 or 3 of them aren’t there, an A-Player will stay put or look for another job opportunity.

“What about A-Players who switch jobs because they’re leaving a bad situation?”

Great point! We’ll save that for another article.